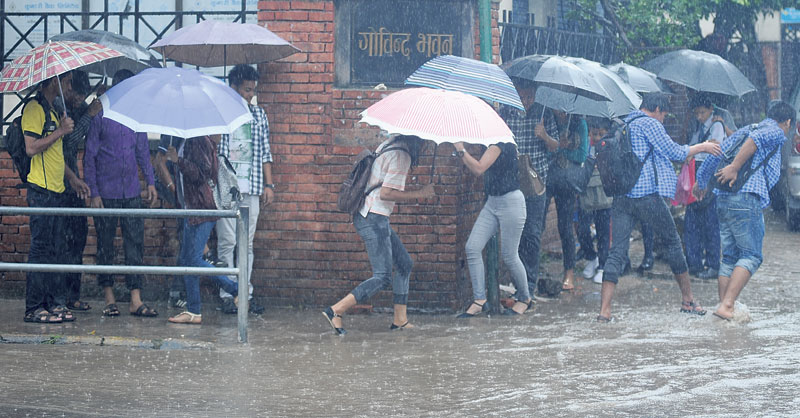 Pedestrians negotiaing a waterlogged sidewalk at Putalisadak in Kathmandu during a downpour on Friday afternoon.(Bijaya Rai/Republica)

Rainfall to continue for next few days: Met office

KATHMANDU, July 2: Heavy rainfalls on Friday lashed several places across the country, including Kathmandu Valley, leaving roads and settlements in many areas inundated.
The wall collapse that killed two children in Kathmandu on Friday has also been attributed to incessant rainfall.

Most of the highways across the country have faced repeated landslides, forcing commuters to remain stranded on the road for hours. The landslides have also hampered rescue efforts. Security personnel deployed to help villagers trapped due to the landslide in Ri VDC of Dhading district could not reach site until Friday evening.

Adverse weather condition in the capital on Friday morning led to the diversion of several international flights to Lhasa of China and Lucknow of India for landing. Authority at Tribhuvan International Airport (TIA) said that domestic flights were also delayed due to bad weather. "An Air China flight was diverted to Lhasa and a flight of Air Arabia and a Nepal Airlines was diverted to Lucknow," Devananda Upadhya, general manager of TIA, informed.

The Ministry of Home Affairs (MoHA) said that it has alerted all concerned security agencies throughout the country about the possible disaster and asked them to stay prepared for rescue operations.

"We have alerted all concerned agencies about possible disasters," Yadav Koirala, spokesperson at the MoHA, said, adding that the ministry has also directed them make necessary logistical arrangements, including foods.

According to Spokesperson Koirala, some people have been buried in landslides triggered by continuous rainfall.

"Security personnel sent to Ri VDC of Dhading district to rescue villagers trapped in landslide were prevented by the heavy rainfall from reaching the site," informed Kiorala. He informed that people of 19 households in village remain trapped due to the landslide.
Likewise, landslides dumped debris at several places along Narayangadh-Mugling road section, obstructing vehicular flow.

According to the MoHA, Kathmandu-Trishuli road-section along the Passang Lamhu Highway has been also blocked by a landslide. An excavator has been deployed to clear the road section.

Although heavy rainfall has battered the lives across the country, the MoHA informed that no big loss has been reported until Friday evening.

Meanwhile, the Meteorological Forecasting Division (MFD) under Department of Hydrology and Meteorology (DoHM) predicted that incessant rainfall would continue on Saturday as well.

"The moisture-laden winds arising mostly from the Bay of Bengal and partly from the Arabian Sea caused the rainfall in the southern parts of the Himalayas, including Nepal, and it is likely to continue for the next few days," meteorologist Shanti Kandel told Republica.

According to the MFD, trough line lies along the foothill of Himalayas and there is a strong wind speed over two to three kilometers above the earth surface.  "The rainfall will lessen somehow on Sunday but it will resume the next day," Min Kumar Aryal, another meteorologist at the division, said.

The MFD said that Kathmandu Valley witnessed 53.1 mm rainfall on Friday.  Likewise, 94.4 mm rainfall was recorded in Bhairahawa, 59.9 mm in Pokhara and 45 mm in Dhangadhi and 40.2 mm in Dang.

KATHMANDU, June 26: Muslims across the country are celebrating ‘Ramjan Ul-Mubarak' which means ‘Roja’ prem with euphoria and triumph on... Read More...

KATHMANDU, Nov 9: Hundreds of pharmacies across the country are running without registration for years. However, the government has not taken... Read More...