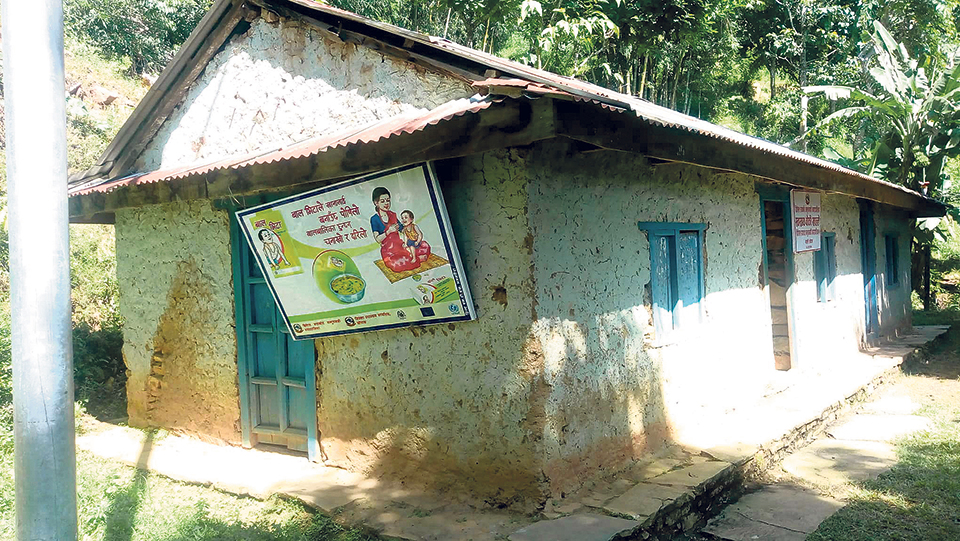 A dilapidated health post in Rupakot village of Khotang in this recent photo. Photo: Republica

KHOTANG, Sept 14: Health workers of a health post in Rupakot village of Khotang are compelled to halt their services whenever it rains due to the leaking roof and walls.

The 27-year-old structure made of mud and bricks with corrugated tin roof is in a dilapidated condition.

“It leaks almost everywhere. It is very difficult to work here when it rains,” said health assistant Santosh Bhattarai, who is also the in-charge of the health post. “This health post built 27 years ago is now too old,” he added.

Bhattarai elaborated that they have to keep moving furniture and other stuffs from wet to dry place as the floor gets filled with water that seeps from walls and the roof.

“Neither we have enough number of tables and beds nor we have enough rooms. Still, we somehow manage to handle the post during winter but it gets very challenging in the monsoon,” he said.

Among the three rooms, one is used for maternal care. The other is for OPD service. The remaining one room serves both as the office and store room.

“Had there been spacious rooms it would have been much easier. But the rooms are too little to work,” said Bhattarai. “The lack of space has badly hit pregnant women. There is no space to keep them,” he added.

Bhattarai further stated that here is no birthing center nearby either.

While locals have demanded better health post in the locality, Dilli Chamling, ward member of Diktel Rupakot Majhuwagadhi Municipality stated that the demand would be fulfilled soon. “We are looking for land to build another health post in the village. Once, we get suitable land, the problem will be solved,” Chamling said.

He admitted that the old building is not manageable anymore.  “Something like health service is the basic right of people. But we have not been able to ensure that in lack of resources,” he said. “We have calculated that it might incur cost of Rs 700,000 to build another building for health post and we are prepared for it,” he added.