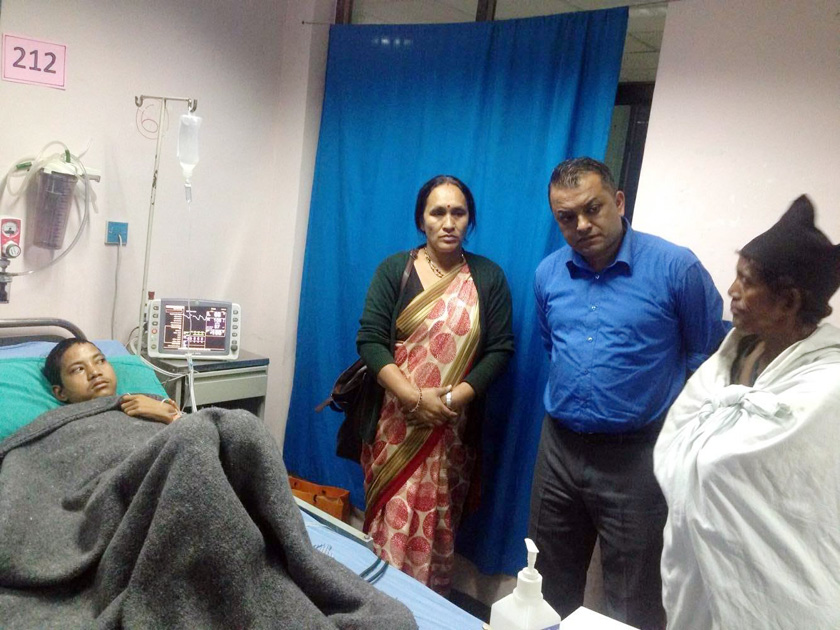 Kapil had been suffering from third-degree burn injuries since last one year. He sustained burn injuries while he was sitting near fire in the cold month of Poush last year.

He was brought to Kathmandu for treatment last Thursday.

During his visit to Kapil, Health Minister Thapa said that the government would bear all expenses for Kapil’s treatment.

“The government will bear all treatment expenses for Kapil as Raute is a protected community,” said Minister Thapa. We will leave no stone unturned for his treatment,”

Kapil was hospitalized at Trauma Center after a rigorous effort of the past one year as Raute community believes in shamanism and herbal medicine.

Kapil had received burn injuries to his arm, backbone and belly one year ago while he was huddling around fire.

Chronic burn injuries have turned severe after Kapil did not receive treatment in time. Kapil is undergoing treatment from a medical team led by Dr Piyus Dahal at Trauma Center.

It has been a year since the daughter of Ein Bahadur Shahi, chief head of Raute Community, contracted illness.

Satyadevi Adhikari, chairperson of Raute Utthan Pratisthan, believes that other Raute members could come to hospital for treatment if Kapil was returned home treated.

Raute Community, with a population of around 152, are still living a nomadic life in Bindrasaini jungle of Dailekh.