He wore it first 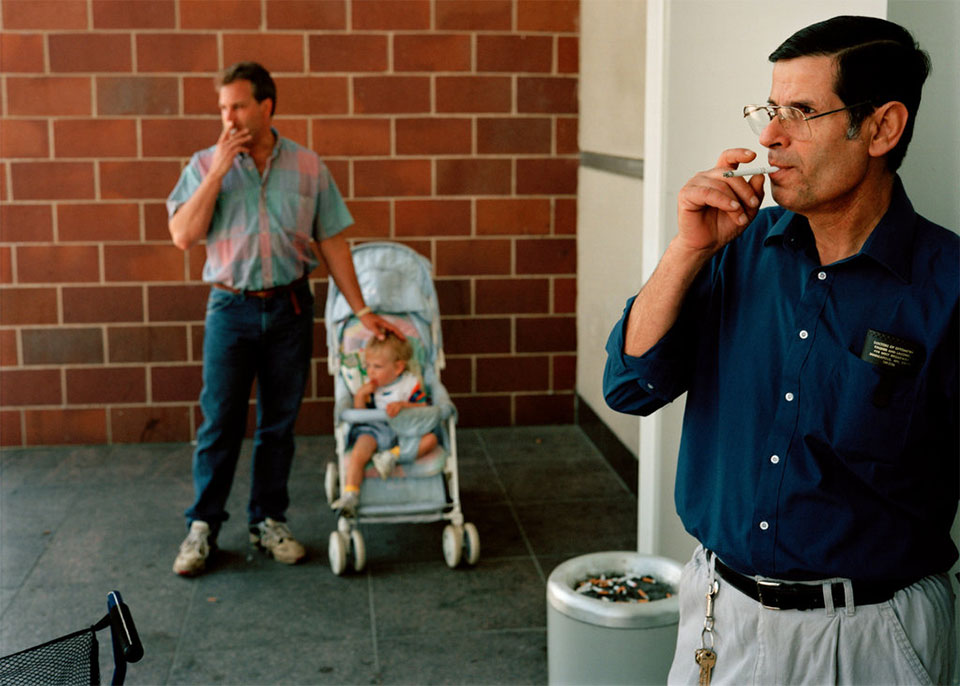 The mall of America in 1994. Martin Parr/ Magnum Photos

Why do all these men look so dreadful? Baggy blazers. Ugly sneakers. Light-wash jeans. Welcome to your dad’s closet.

Well before his public meltdown, Kanye West had already done the most uncool thing ever: He got married, had kids and moved to an upscale enclave of Los Angeles. His latest Yeezy collection for Adidas (which includes schlubby sweatshirts, tracksuits and athleisure basics) is filled with sly references to his newfound life as, well, a suburban dad.

A.P.C. came around with high-waisted pleated chinos, fanny packs and socks worn with shorts. The label also has orthopedic-looking sneakers; their designer hashtagged them #dadshoes on Instagram.

A spring show for Balenciaga brought baggy blazers, bleached-out jeans and oversize shirts. To drive the point home, some of the male models were accessorized with children. Vogue called the look“dadcore.”

Dads are now at the center of the style universe. And their ethos, dad-ism, is part of the mass move to the unique and the downright fugly. There’s a reason that men in general have chosen to look so bizarre: “Designer brands have become beacons of fugly precisely because people have replaced shopping for things with posting them and then re-’Gramming them,” Nick Sullivan, the fashion director of Esquire, ha s said.

Dads in specific, though, are “the OG hypebeasts”; The Wall Street Journal recently declared that “‘Dad style’ is now in fashion. Yes, even the jeans.” GQ gave fathers a full-throated fashion endorsement, proclaiming that “the coolest sneakers to buy right now are ones your dad already owns.”

How did we come to the conclusion that orthopedic footwear, light-wash jeans and all the other trappings of dads were cool?

“This is a logical extension or evolution of normcore,” said Brian Trunzo, the senior men’s wear editor at the trend forecasting firm WGSN. He calls the look “retired millennial.” “There’s something uniquely American about it, and very real, red-blooded man, like, ‘I’m going to wear a baggy plaid shirt with relaxed khakis because I’m chilling and I’m comfortable in my manhood.’”

Emily Segal, a founder of the design and technology think tank Nemesis Global and a former member of K-Hole, the trend forecasting group that helped identify the normcore phenomenon, has a more expansive view of the movement.

‘I look like I’m going out to mow the lawn’

Bobby Whigham, a 33-year-old creative director for the retailer PacSun, isn’t a father. But he admits to dressing like one.

“I’ll see myself and think, ‘I look like I’m going out to mow the lawn,’” said Mr. Whigham, who is partial to carpenter pants, tucked-in T-shirts, oversize sweatshirts and clunky sneakers like the Nike Monarch and the New Balance 998.

Former colleagues called him “Dad,” which is auspicious, since part of his job is to sell the dad look to young men. “It’s about wanting things that aren’t branded,” said Mr. Whigham, who recently moved to Costa Mesa, Calif., from Philadelphia. “Things that are worn, the color’s faded, there’s sun damage. It’s like it had another life before you had it. There’s history in the garment.”

Sam Lobban, formerly the buying manager at Mr Porter, the luxury online retailer for men’s wear, said that Mr Porter will be endorsing the look this season at the high end. Mr. Lobban, now a vice president at Nordstrom, pointed to items like faded straight-leg denim jeans by Balenciaga ($650), sneakers with chunky soles ($390), fanny packs($1,250) and fleece jackets ($405) as prime examples of this trend.

Mr. Lobban notes that dad style is working in tandem with two bigger-picture trends. “The mid-1990s anti-fashion look — very much the Balenciaga movement,” he said. “And, on the other end of the scale, the refocus on brands like Patagonia, which is really about preparedness and function, end-use garments not designed for design’s sake.”

Another fan of the look on the high-fashion end is Virgil Abloh, the creative director of men’s wear at Louis Vuitton. His own label, Off-White, makes a number of dad references including the Dad Space Cowboy Vest ($1,270). “Virgil has embraced the dad culture of wearing relaxed denim with baggy overshirts and chunky sneakers,” Mr. Trunzo of WGSN said.

And he doesn’t see it going away any time soon. “This is definitely the beginning,” he said. “I think we’ll be seeing more of it.”

Fashion, of course, doesn’t exist in a vacuum and the rise of dad style also dovetails with several sociological shifts taking place.

“There’s always something about coolness that has to do with resistance, not in a political protest sort of way, more in the sense of something being wrong,” Ms. Segal said. She points to brands like Prada, which has long experimented with bad taste and “ugly” fashion to subvert traditional notions of what’s cool.

For young men, traditional roles of childhood and fatherhood have become unmoored in recent years.

Millennials, for example, have started leaving pricey city centers and are moving to the suburbs. And young people are living at home longer than ever, according to a Pew Research Center study, because of high housing costs and lower marriage rates, which is upending the traditional timeline when young urbanites marry, have children and move to the suburbs.

Meanwhile , fatherhood has become cool in other circles. As Dazed, the British youth culture magazine, noted in an article, influencers like Mr. Abloh, Mr. West, the designer Heron Preston and the model Luka Sabbat have taken to calling themselves “art dads,” which loosely means someone with street cred.

Seen another way, dad style is perhaps one more example of the internet’s ability to subvert classifications.

“Remember when you were young and you met a 30-year-old? He was in a suit, he was a fuddy-duddy, an old fogy,” Mr. Trunzo said. “Today, 30 is the new 20, and it’s totally acceptable to present yourself as a hybridized cool teen-slash-art dad.”