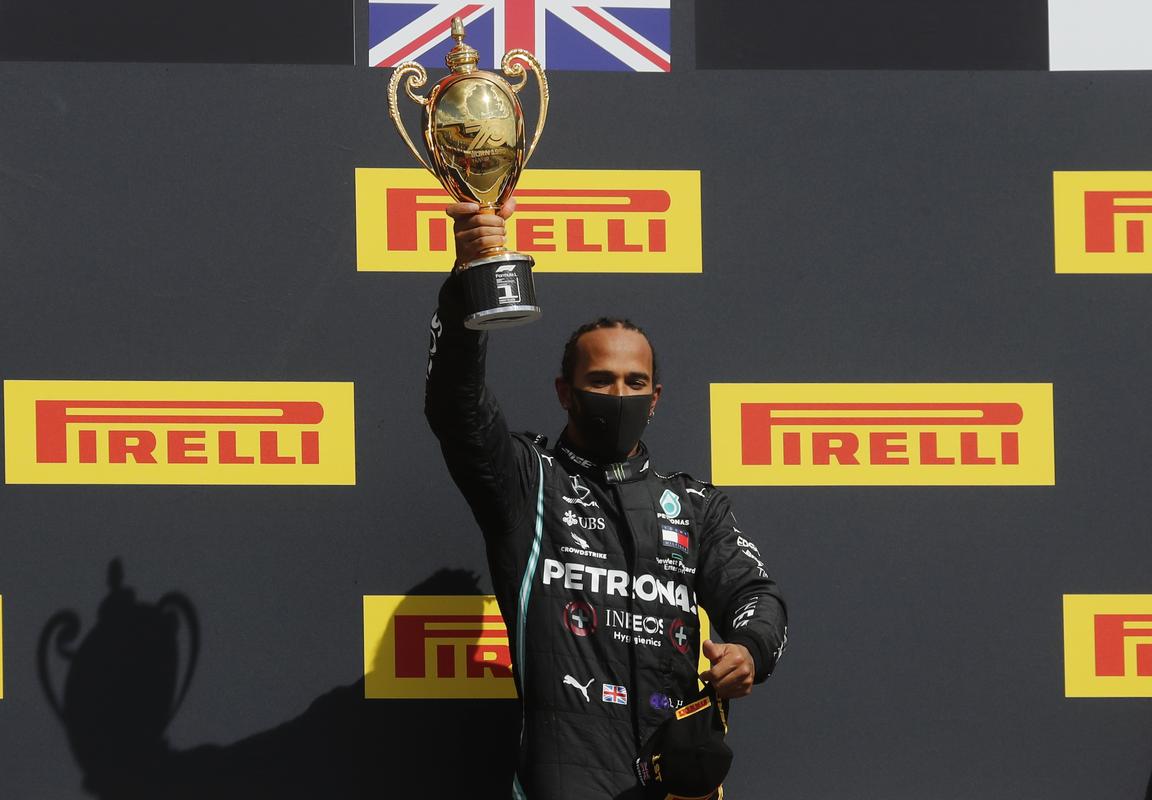 SILVERSTONE, ENGLAND, Aug 3:  Lewis Hamilton limped to a record seventh British Grand Prix victory with his heart in mouth and a prayer on his lips after a dramatic last-lap puncture turned his Mercedes into a three-wheeler on Sunday.

In an astonishing end to a race he had dominated from pole position, the six-times world champion nursed his stricken Mercedes across the line to stretch his Formula One world championship lead to 30 points.

“I have definitely never experienced anything like that on the last lap,” said Hamilton after inspecting his barely-attached front left tyre.

Red Bull’s Max Verstappen finished second, but could have won had he not pitted for fresh tyres in a successful late bid to score an extra point for the fastest lap, assuming victory was out of reach.

Ferrari’s Charles Leclerc was third, another surprise for a team struggling for performance.

Hamilton’s team mate and closest rival Valtteri Bottas failed to score after also suffering a late puncture and finishing 11th, despite a one-two finish for the pair having looked a nailed-on certainty until late in the race.

“Up until that last lap everything was relatively smooth sailing,” said Hamilton of a race that was already extraordinary for the absence of spectators due to the COVID-19 pandemic.

“I heard that his (Bottas’s) tyre went and I was just looking at mine and everything seemed fine. The car was still turning no problem... Those last few laps I started to back off and then just down the straight it just deflated.

“That was definitely a heart in the mouth kind of feeling... I was just praying to get around and not be too slow. I nearly didn’t get around the last few corners. Thank God we did.”

The victory was the 87th of Hamilton’s F1 career — leaving him four short of Ferrari great Michael Schumacher’s all-time record of 91 — and his third in a row. It was also probably his greatest escape.

Verstappen’s race engineer summed it up over the team radio: “He’s a lucky boy.”.

The Dutch driver said he was happy with second place and brushed aside talk of a missed win in a race with two safety car periods.

“I could also pick up a puncture and then you lose a lot more,” he said. It’s so easy to say afterwards we should have just continued. But who would have said Lewis would have got the puncture?

“I don’t regret anything. I think we made the right decision.”

Australian Daniel Ricciardo was fourth for Renault, ahead of future McLaren team mate Lando Norris, whose own team mate - Carlos Sainz - also had a puncture.

The next round, the 70th Anniversary Grand Prix to mark Silverstone’s hosting of the first world championship race in 1950, is at the same circuit next weekend. But it will struggle to match Sunday’s sensation.

Only 19 of the 20 drivers started, with Racing Point stand-in Nico Hulkenberg failing to make it out of the garage due to power unit problems.

The German was replacing Mexican Sergio Perez, in quarantine after testing positive for the new coronavirus earlier in the week.

All the drivers took part before the start in a stance against racism, with Hamilton one of 13 taking a knee as the other seven stood behind.

A World War Two Spitfire fighter plane flew overhead afterwards in a gesture of thanks for Britain’s National Health Service.