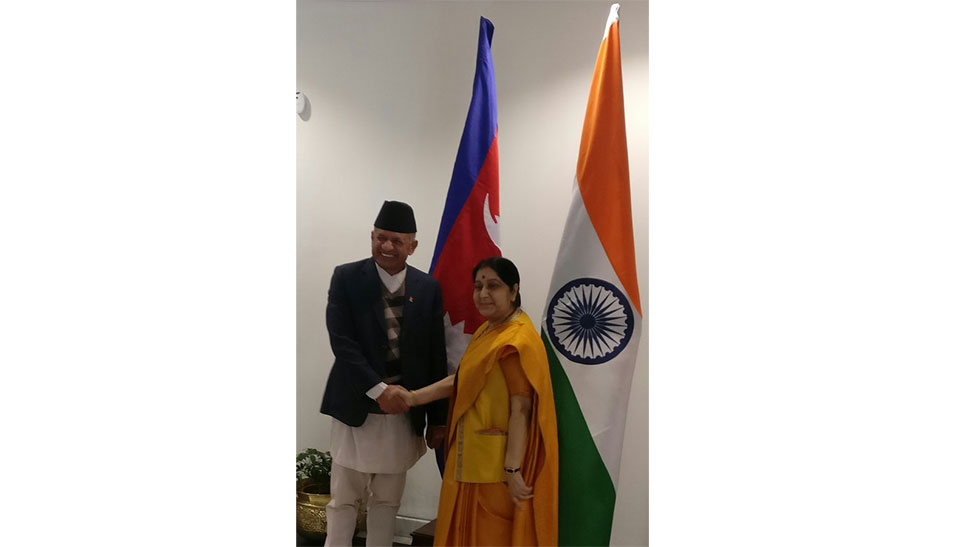 KATHMANDU, Jan 12: Foreign Minister Pradeep Gyawali has discussed with his Indian counterpart Sushma Swaraj about convening the long-stalled SAARC Summit during his two-day visit to India.

Minister Gyawali stressed the need for convening the summit at the earliest by resolving any differences that the member states may have between them through negotiations, government officials privy to the matter told Republica.

Minister Gyawali reportedly conveyed the message that Nepal as the current chair of SAARC is keen to see the summit take place without any further delay.

Talking to Indian journalists in New Delhi before wrapping up his visit on Friday, Minister Gyawali argued that there is no point why the countries having differences could not sit together to resolve the issues.
“Nepal is always in favor of broader regional and meaningful cooperation. There is no alternative to sitting together for talks and finding solutions to the problems,” he said.

“If [Donald] Trump and Kim [Jong-un] can meet, then why not countries in our region?” asked Minister Gyawali.

The last SAARC Summit scheduled to be held in 2016 was canceled after India expressed its inability to attend the event following the terror attack at an army base in Uri of Jammu and Kashmir. Back then, India had said that under the “prevailing circumstances” it would not be able to attend the summit. Nineteen soldiers were killed in the September 18 attack.

New Delhi has been maintaining its position that no dialogue can take place between India and Pakistan until Islamabad demonstrates visible action toward curbing terrorist activities emanating from its soil. In November, India had snubbed Pakistan’s invitation to Prime Minister Narendra Modi to attend the SAARC Summit in Islamabad.

Regarding India’s reluctance to accept the report prepared by the Eminent Persons Group on India-Nepal Relations, the foreign minister said, “The EPG was a wise initiative. It was based on the realization that all bilateral aspects should be reviewed according to new paradigm of the 21st century. I am confident that it will be submitted and implemented.”

Sources said Minister Gyawali held brief one-on-one with Swaraj ahead of the delegation-level talks between the two countries in New Delhi on Thursday. It is learnt that Gyawali urged his Indian counterpart to accept the report prepared by the EPG team.

Foreign Minister Gyawali also urged the Indian side to exchange the demonetized Indian currency notes of 1,000 and 500 denominations worth IRS 70 million that are being legally held in Nepal since 2016.
“Nepal has banned high value Indian currency until it gets an assurance from the Indian government that the same thing will not be repeated in the future,” he said.

Minister Gyawali, who returned home on Friday evening, had reached New Delhi on Thursday to address the Raisina Dialogue 2019 as one of the keynote speakers.