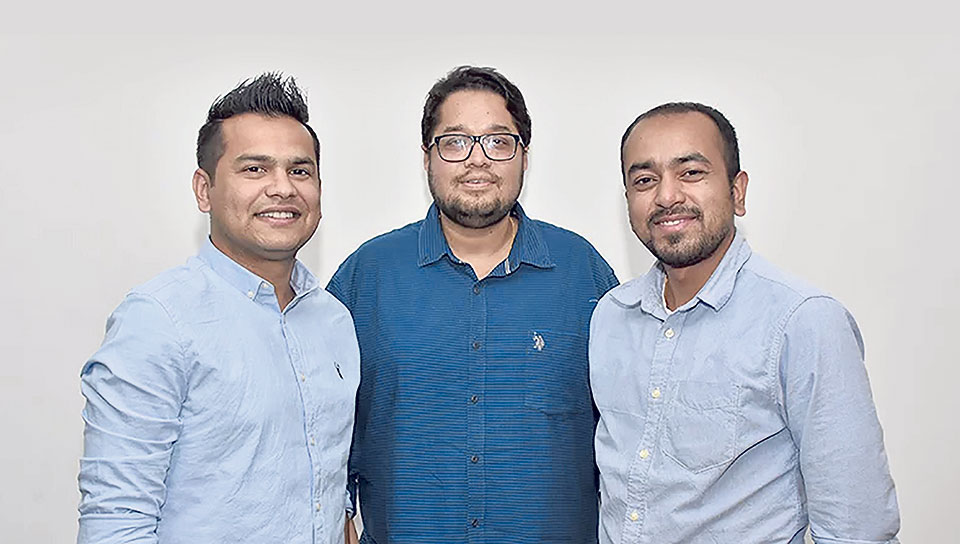 Internet has made buying and selling things more convenient than ever before. While customers don’t have to go through the hassle of going to a store, waiting in line at checkout and then carrying their purchases back home, it has provided abundant opportunities for economical gain for the sellers as well. There are a bunch of companies and individuals who are selling everything from clothes and accessories to electronics and stationery products over the internet. But the one area that is not really covered is groceries. This is why Kalyan Adhikari, Adarsha Raj Pandey, and Sagar Dev Bhatta launched Kirana, an online and on-call grocery service – the first of its kind in Nepal.

A little more than a year ago, Adhikari, Pandey, and Bhatta conducted a research surveying over 3000 households on the feasibility of an online grocery in Nepal. They selected the Baneshwor area as the prime location of their survey because apparently this area has a grocery store in every other alley. “If the people living here, with so many options to buy grocery from, liked the idea of an online grocery store, then other localities in the city that have fewer grocery shops would definitely be interested in it,” says Adhikari who is the chief commercial officer of Kirana.

A little more than a year ago, Adhikari was an employee at another online business, Kaymu, so he knew the basics of running an online business empire. Pandey had just gotten back from the United States after completing his Masters and Bhatta was working at Thamel Remit. They knew one another because Adhikari and Pandey were in the same MBA program and Pandey and Bhatta were co-workers at the same firm at one point. They were looking into the Nepali E-Commerce industry and the biggest shortcoming they came across was the fact that no one had covered groceries properly. So they studied it and launched Kirana about a year ago after months of ideation.

“Surprisingly this business has topped our expectations on the basis of its performance and reach. We had not expected to have this prominent of a presence in the Nepali market within a year. Even financially, our business has been quite profitable till date,” claims Adhikari. He believes that a big reason that has helped Kirana’s headway has been their good customer service.

The bad roads of Kathmandu valley have been troublesome for Kirana during delivery. Adhikari reveals that their deliveries are almost always getting delayed these days because of the condition of roads in different areas of the capital. “Another big issue we are noticing as an online business is the way social media business is disturbing e-commerce in Nepal. These shops do not have to pay VAT so their prices are almost always lower than the amount an authentic store (be it physical or online) would charge. It’s a very easy and inconsistent way to earn. Many of these social media stores are also not very reliable. There have been so many accounts of them cheating their customers on everything from prices to quality of products and they do not even have return policies. This is creating a bad image of e-business in general among people,” claims Adhikari.

However, Adhikari mentions that the whole Kirana team is grateful for every single purchase and they treat all of it the same without prioritizing a customer who buys more stuff over the teenager who only ordered a candy. Kirana also offers free and swift delivery service for all purchases. If you order goods from Kirana before 10 am, they will be delivered by that evening. For orders made between 10 am to 6 pm, the delivery will be done the next day. Kirana has also partnered with Kumari Bank and Nabil Bank on cashback offers to mutual customers.

Till date, every purchase made on Kirana is either through cash or card payment but Adhikari states that the team is working to make online payment possible too. They are also looking to partner with more banks. Another thing Adhikari mentions that the Kirana team is working on is making it accessible to customers outside Kathmandu valley. He adds that they are planning to run Kirana’s services properly in at least two more cities by the end of this Nepali year.

SAVE TIME WITH ONLINE GROCERY SHOPPING

KATHMANDU, Oct 19: Though online shopping of groceries is a comparatively new concept in our country, the best part about the facility is... Read More...

Grocery shopping, in the capital, seems to be slowly becoming a cyber affair. More and more vendors, suppliers as well... Read More...

Finding good quality, fresh vegetables at fair prices when you can’t personally make it to the Kalanki vegetable market has... Read More...