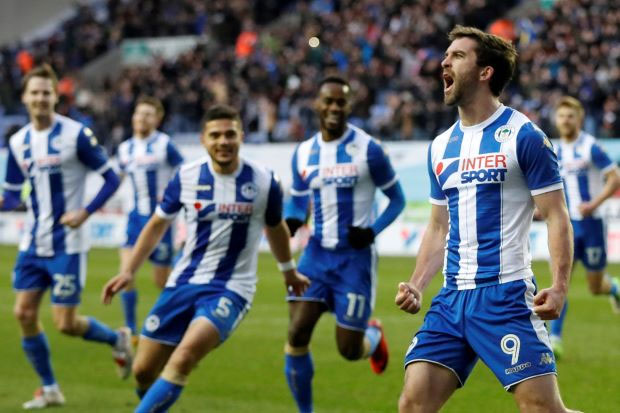 LONDON, Jan 28: Wigan Athletic pulled off the big shock of the FA Cup fourth round on Saturday as the team from the third-tier of English football knocked out Premier League West Ham United 2-0 with a famous double from their cult hero Will Grigg.

West Ham were not the only top-flight side to flounder in England’s famous knock-out competition, however, as Liverpool lost 3-2 at Anfield to West Bromwich Albion in a game overshadowed by the theatre surrounding the new VAR technology.

On a day of typical FA Cup drama, Tottenham Hotspur were also eight minutes from tumbling out at League Two (fourth-tier) Newport County until a Harry Kane tap-in salvaged a 1-1 draw.

Above all, it was David Moyes’s West Ham who suffered the sort of nightmare Cup afternoon the bigger clubs dread.

Wigan’s hero proved to be Northern Ireland striker Grigg, who again found himself the subject of the fans’ favourite chorus of “Will Grigg’s On Fire” as he headed home after seven minutes and converted a second-half penalty.

To compound their misery, the Hammers had to play for more than 40 minutes with 10 men after Arthur Masuaku was sent off soon after the break for spitting at Wigan’s Nick Powell.

League One leaders Wigan, who knocked out Premier League Bournemouth in the third round, have seen fortunes dip since lifting the Cup in 2013.

Yet their fans at the DW Stadium were again left celebrating when Grigg scored his second in the 62nd minute from the spot.

“A Cup run is great. The extra games are no problem for us. If it is a top Premier League team next, we will take that,” said a delighted Grigg.

Liverpool suffered their first defeat at Anfield this season, a double from Jay Rodriguez inspiring West Brom to triumph against all the odds - and VAR.

First, it was used to rule out an early West Brom goal from Craig Dawson for offside.

Then referee Craig Pawson used his pitchside monitor at length - the first time the on-field review has occurred in the English game - to change his decision and award a penalty to Liverpool after a foul by Jake Livermore on Mohamed Salah.

Firmino, though, hit the bar with his spot-kick and Albion manager Alan Pardew’s angry features only changed once Joel Matip diverted a cross into his own net just before the break.

Salah’s late strike, amid plenty of Liverpool pressure, proved not enough to save the Reds who were again let down by poor defending.

Newport were close to pulling off an authentic FA Cup sensation against a side 72 places above them in the league hierarchy as they led Spurs 1-0 through a first-half headed goal from Irishman Padraig Amond.

Yet the dream evening for Newport in front of a 10,000 sell-out crowd was ruined when Kane pounced after an 83rd-minute corner to notch his 30th goal of the season in all competitions.

Spurs manager Mauricio Pochettino was unhappy with the commitment of his side, telling reporters he was “relieved a lot” and that “the team didn’t really show that they wanted to go through to the next round”.

Swansea were also given an uncomfortable ride in a 1-1 draw at Meadow Lane after Luciano Narsingh’s goal just before halftime was answered by another goal in the 62nd minute from Notts County’s 34-year-old forward Jon Stead who has scored in all four rounds of the Cup this season.

Leicester City won 5-1 at League One Peterborough thanks to two goals each from Fousseni Diabate on his debut and Kelechi Iheanacho.

SC annuls cabinet expansion by PM Oli, 20 ministers dismissed from their posts
5 hours ago
Govt decides to resume domestic and int'l flights with some restrictions
2 hours ago