Illegal sand mining ongoing with protection from the local officials at Ghyalchowk of Gandaki Rural Municipality in Gorkha district in this recent photo. The rural municipality charges Rs 1,695, per tipperload of sand as tax. Although it is mandatory for sand mining firms to take permission from the Department of Mines and Geology, they have not done so. Sand mining has become a major ecological problem across the country. Photo: Narahari Sapkota/Republica

GORKHA, Jan 29: Gorkha Resource Private Limited is not registered at the Department of Mines and Geology. However, in the name of mine excavations, it has been extracting sand and other aggregates from wards 7 and 8 of Gandaki Rural Municipality for months now.

Siddhidarshan Private Limited and Buddha Sand Procession Center have the same story. Without receiving permission from the authorities concerned, these companies have been operating at the two wards.

According to a representative of Gorkha Resource Private Limited, the company is registered at the rural municipality only. "We visited the Department of Mines and Geology several times, but could not get it registered," he said.

The company has taken 134 ropanis of land on lease for the purpose of mining. The area spread over some pasture land and some mountains which were green earlier with trees and bushes now look deserted and fragile. The two other companies have also taken land on lease for mine excavation. It has been learnt that none of them have done environment assessment test before this intervention.

According to the locals, such companies have turned their villages into deserts, and yet the authorities concerned have kept mum.

According to Tulasi Regmi, chairperson of Gandaki Rural Municipality–7, the local government has rights over resources and the companies have received permission from the rural municipality for their operations. "From the taxes we collect in the wards, 25 percent comes back to us for development.

It is the right of the local body to use local resources for several purposes," she said. "There are legal hassles to register the companies at the department of mines, or else they would be registered," she defended.

Chairperson of Gandaki Rural Municipality, Hom Bahadur Rana spoke on the same line. As per the Local Governance Act, the local units can freely use the resources, but the companies have to pay taxes, he said. "So we gave them permission that way," he said. "But if we find them working beyond the guidelines, we will take action. The environmental aspect is important," he added.

Rana further stated that the rural municipality has already collected Rs 3 million from sand excavator companies so far this fiscal year. "We invest the money for other developmental works," he said.

Meanwhile, Dr Somnath Sapkota, director-general of the Department of Mines and Geology, termed the entire businesses as illegal.

Rural municipalities have no authority to give permission to mining companies to operate at any place. "They cannot give permission as they please. It requires a detailed study and only after the report is endorsed, we give permission," he said. "If they follow due process, there is no hassle to get permission from here," he added.

But when it comes to pastureland, mountains and minerals, it is compulsory to get permission from the government department concerned. 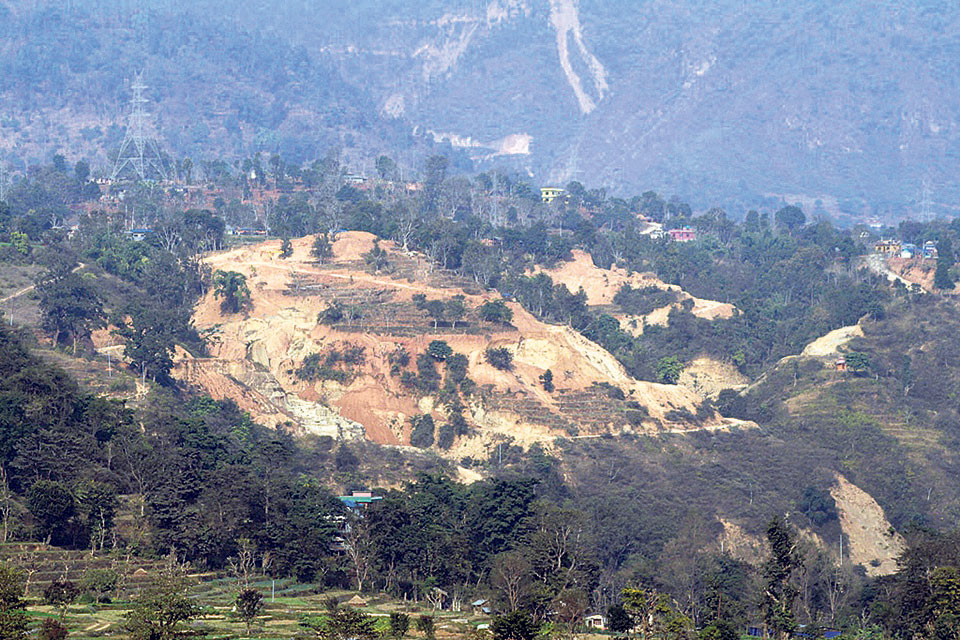 Green hills are fast turning into deserts due to the operation of illegal crusher plants in Gorkha district. Photo: Republica

Dailekh, Sept 9: A seismic survey conducted for the exploration of petroleum products in Dailekh district has proved that the... Read More...

KATHMANDU, Sept 12: The government has granted permission for the exploration and scoping study of 407 mines throughout the country... Read More...