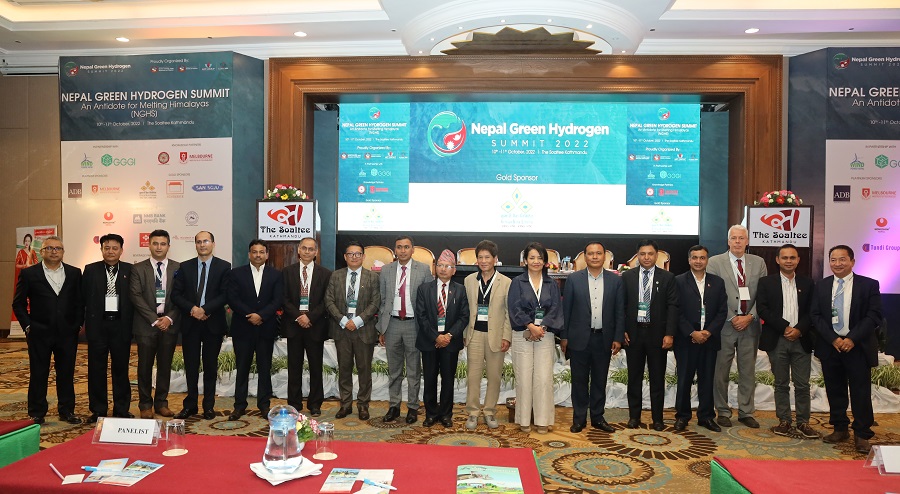 KATHMANDU, Oct 12: The two-day Nepal Green Hydrogen Summit has been concluded by brainstorming on issues such as the state of hydrogen production technology, investment potential and policy management.

According to the organizers, policy makers, foreign and domestic experts and investors discussed the relevance and feasibility of hydrogen production in Nepal by analyzing data from various studies and world practice on the preparation, consumption and marketing of hydrogen in Nepal in various sessions of the summit.

The summit concluded that Nepal is likely to be able to export hydrogen in just 10 years.

In the hydrogen policy session of the summit, it was concluded that Nepal should decide on hydrogen production policy by analyzing its situation and world practices.

Madhu Prasad Bhetwal, spokesperson for the Ministry of Energy, Water Resources and Irrigation, said that according to the budget, green hydrogen production has started to be prioritized. He said that considering the high consumption of electricity in Nepal and the responsibility of environment protection, he will make policy management to go into its production. “The government is ready to manage subsidized electricity for the hydrogen industry in the initial stage,” he added.

Various experts at the conference said that it would be useful to make a plan to produce urea through hydrogen in Nepal. Akshit Paudel, an engineer at the Investment Board Nepal (IBN), said that according to the study of the IBN, a chemical fertilizer factory is possible in Nepal.

He presented figures that if electricity is available at 3 rupees per unit, chemical fertilizers can be produced at 436 US dollars per metric ton. He said that Nepal is facing a shortage of chemical fertilizers and it is necessary to produce fertilizers to eliminate the double damage of having to pay high prices and sell them with cheap subsidies. However, he said that the carbon capture technology needs to be further analyzed for this.

Baburam Subedi, a joint secretary at the Ministry of Finance, said that while making a policy on this matter, an in-depth study on the matter would be necessary to ensure that fertilizer production is technically possible in Nepal. He suggested that it would be more appropriate to go into the construction of a model project in the first phase rather than a commercial one. He said that the government has thought of developing a model project related to chemical fertilizer production.

KATHMANDU, Sept 21: Nepal exported electricity worth Rs 2.42 billion to India in the month of August of the current... Read More...

KATHMANDU, March 21: India has expressed concern over growing export of soybean oil from Nepal to India even as Nepal has... Read More...