Govt yet to dispatch 5.5 million copies of school textbooks to districts 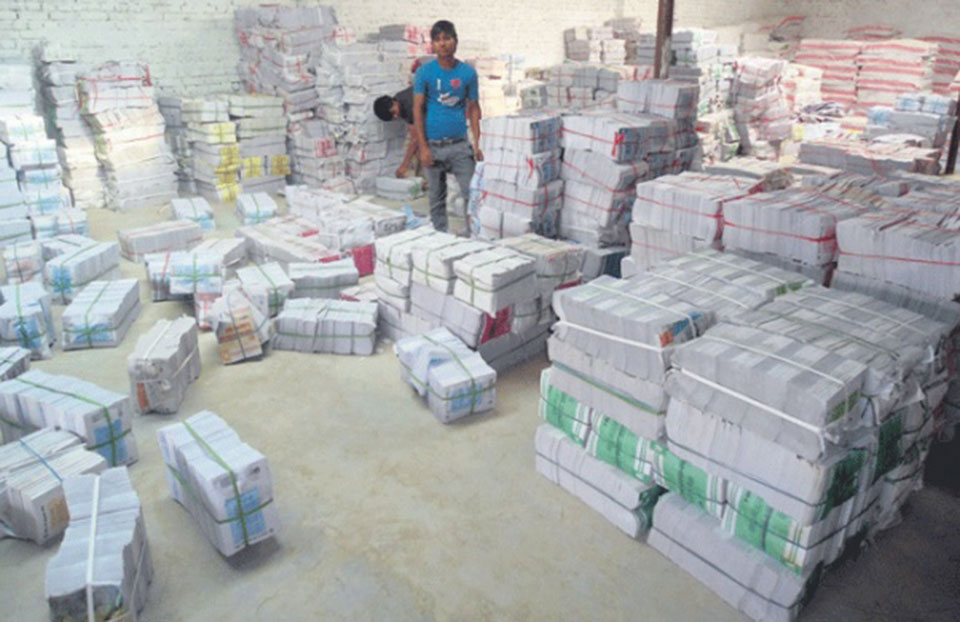 KATHMANDU, April 29: The government is yet to dispatch 5.5 million copies of school textbooks from Kathmandu to the districts for the new academic session that began from April 14.

According to a report prepared by the Ministry of Education, Science and Technology (MoEST), a total of 40 million copies of textbooks are required for the students of grades 1-10 in the current academic session.

The textbooks, according to MoEST, should be supplied to the schools two weeks before the start of the new academic session.

According to the Janak Education Materials Center (JEMC), the state-owned publication that publishes school textbooks, it has printed 21.5 million copies of textbooks by April 28.

Timilsina said over 90 percent of textbooks have already been dispatched to the hill districts. “The government has already released over Rs 2 billion to the local bodies to buy the school textbooks,” he said.

The schools will purchase the textbooks after the local bodies provide the funds to the schools. “The distribution of school textbooks to be provided to public school students free of cost has been obstructed due to negligence of the local bodies and school authorities,” said the MoEST officials.

JEMC informed that it would print a total of 22.5 million textbooks for the current session and the remaining copies of 17.5 million will be printed by the private publishers. The JEMC is accountable for printing textbooks from grades 5-10 while the private sector will print textbooks of grades 1-4, according to MoEST.

All the governments since 2008 have failed to deliver the school textbooks to the students or schools on time, according to the Guardians Association Nepal. “The students of Province 2 and Province 6 have faced problems of getting school textbooks during the enrolment campaign,” said Keshav Puri, president of the association.

Out of the total 77 districts in the country, the new academic session of schools in Humla, Dolpa, Jumla, Mustang and Manang begins from February 13 every year while it begins on April 14 in the remaining 72 districts.

Shortage of some school textbooks even in Valley: Guardians

For school children, yet another academic session without textbooks looms

KATHMANDU, Sept 5: Despite repeated pledges by the Ministry of Education to deliver school textbooks, it has failed to do... Read More...

Renu Dahal leading by more than 5,000 votes in Bharatpur metropolis
2 minutes ago