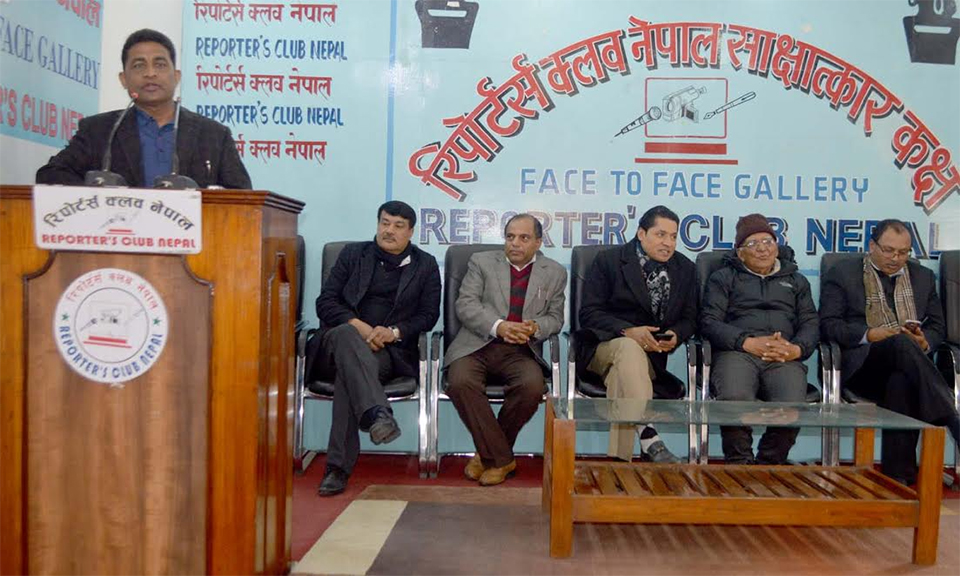 “The government is preparing to hold elections by May 28,” Khanal said, “if the local elections were held by the end of May, the other two elections – federal and provincial- would be held by mid-December.”

The government is working toward concluding three tiers of elections by January 21, 2018, said Khanal.

Lashing out at the government, Former Minister and leader of the CPN-UML Raghubir Mahaseth said that the government is conspiring to linger the elections in the name of constitution amendment bill. Meanwhile, he accused Prime Minister Dahal of working at the behest of foreign power.

Saying that Dahal-led government is not in a mood to hold elections, he called for the withdrawal of the constitution amendment bill.

He accused the government of trying to move ahead even by scrapping Article 274 of the constitution, which he said is unfortunate for the country.

Speaking on the occasion, Nepali Congress (NC) leader and lawmaker Min Bishwokarma said the government will announce the date for elections by January 10. “If the date were announced within 10 days, the election commission would be able to hold elections by May 28.”

He further said that NC is taking the initiative in conducting elections by taking all the political parties into confidence.

Rastriya Janamorcha Chairman Chitra Bahadur KC accused the government of shying away from conducting elections. “Federalism is unsuitable in our country,” KC said, adding “the government has not been able to hold local elections for the last 19 years just due to reason.”

Similarly, Madhesi Morcha leader Anil Jha warned that Morcha will not go for elections if the constitution amendment bills registered in parliament were not endorsed.

KATHMANDU, July 27: The government has claimed that fixing potholes and repairing roads inside the Kathmandu Valley has been expedited following... Read More...

KATHMANDU, July 5: Nearly 300 government staffers appointed to various sectors by the then Deuba-led government have lost their jobs. Read More...