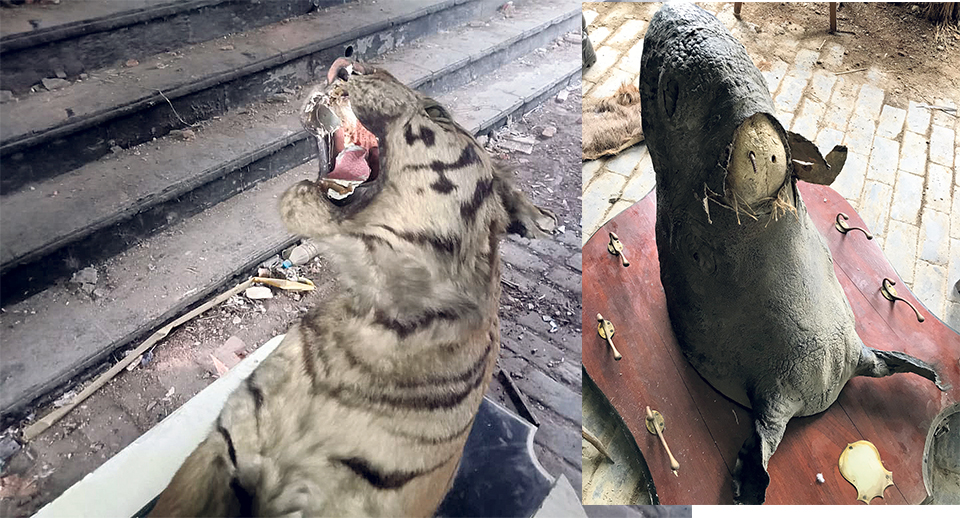 KATHMANDU, Aug 29: Wildlife trophies have been found stolen from Belayati Baithak on  the third floor of Singha Durbar, the historic central secretariat building which is overseen by two different government ministries, the Prime Minister’s Office (PMO) and the National Reconstruction Authority (NRA).

Secretary at the Home Ministry Prem Kumar Rai informed the parliament’s Delegated Management and Government Assurance Committee that the PMO, the Home and Defense Ministries and NRA have oversight responsibility for the main building in the Singha Durbar complex.

The upper house committee had summoned Rai over the stolen wildlife trophies including the teeth and claws of a taxidermy tiger, a rhino horn and two deer horns from Belayati Baithak, the state banquet hall which has not been in use since the 2015 earthquakes.

Responding to lawmakers’ queries, the Home Secretary Rai said the ministry is unaware about the trophies missing from the hall that is kept under lock and key. “The ministry is unaware that the wildlife trophy parts have been stolen,” he said at the committee. “We are looking for an inventory of the trophies and other goods in the hall but unfortunately we haven’t found any records on these articles.”

Ruling NCP lawmaker Balaram Baskota had asked Rai whether the ministry had received any reports about thefts at the central administrative office.

Lawmaker Radheshyam Adhikari of the main opposition party Nepali Congress asked which were the responsible authorities for safeguarding Belayati Baithak. In reply Rai said the PMO, the Home and Defense Ministries and NRA are responsible for the historic building. Singha Durbar was constructed by Rana prime minister Chandra Shumsher early in the 20th century.

Before the 2015 earthquake, the PMO, the Ministry of Defense, the National Planning Commission and other key government offices were housed in the same sprawling building.

“Although only the PMO and the Home Ministry had the keys to the hall, the Defense Ministry was equally involved in overseeing the whole building and lately the NRA was involved in retrofitting work,” said Rai. He also informed the parliamentary committee that the government had urged the Nepal Army to relocate the wildlife trophies, historical photos, traditional paintings and other valuables in the building to a safer place.

According to Rai, the army didn’t shift all the important items and antiques from the building which became vulnerable after the big earthquake. Post-quake retrofitting work on the century-old building started last year.

Home Secretary Rai had visited Belayati Baithak twice after it was last used in January 2012 during a visit to Nepal by then Chinese prime minister Wen Jiabao. Rai said the ministry has not inspected the building after the retrofitting work started.

“Belayati Baithak and the sections used as the prime minister’s chambers and meeting hall were in precarious shape when I visited there a few years back. It was sad to see the place overrun by mice and stray dogs,” he added.

Committee chair Ram Narayan Bidari told Rai to take appropriate action to find the items. Other lawmakers demanded the summoning of officials from the PMO and other offices and the secretary of the Ministry of Forest to inquire about the trophies.