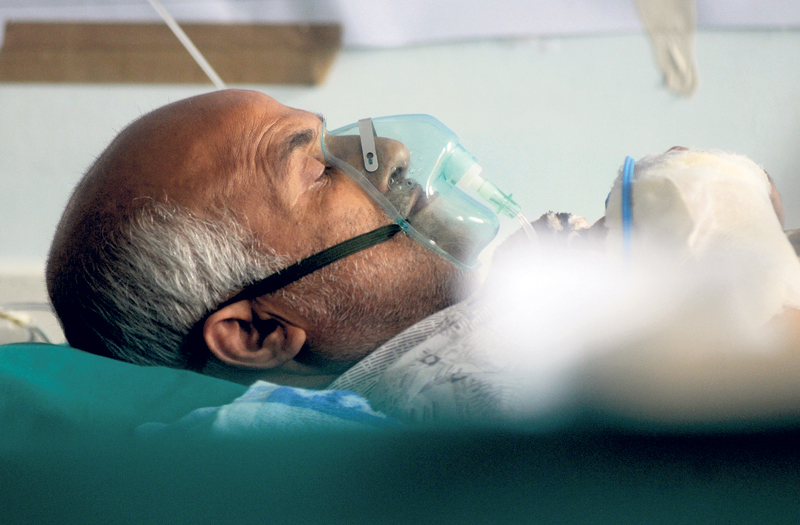 Fast-unto-death since last 11 days
KATHMANDU, July 21: Every day about a dozen senior leaders of the major political parties, lawmakers, human rights activities and civil society members reach Tribhuvan University Teaching Hospital (TUTH) to take note of the health condition of Dr Govinda KC, who has been on a fast-unto-death since the last 11 days.

They express solidarity with Dr KC's cause and make commitments to draw the attention of the authorities concerned to fulfill the demands put forth by him. They also do not forget to request him to postpone his ongoing fast in view of his deteriorating health and the political instability in the country.

But neither have the authorities concerned paid much heed to Dr KC's demands nor is the doctor himself in any mood to compromise on his stance and put off his strike.

"Despite his worsening condition, Dr KC seems adamant on continuing his hunger strike unless his demands are fulfilled," said Dr Jeevan Chhetri, a staunch supporter of Dr KC's demands. Even the government seems not to be serious over his deteriorating condition and has not yet thought it necessary even to form a formal talks team.

"We have held informal discussions with some political leaders close to the prime minister but they too do not seem serious about fulfilling Dr KC's demands," informed Dr Chhetri. He complained that the political leaders to whom he has talked said the attention of all the political leaders is focused elsewhere and the situation in the country is not favorable for any hunger strike.  He said that medical students and doctors who have been supporting  Dr KC are now in a dilemma whether to request him to postponed his hunger strike or not.

"We could talk to him had he given any hint of his willingness for talks. But he is determined to continue the hunger strike," said Dr Chhetri.

Dr KC is on a fast-unto-death since the past 11 days to press his four demands, includes the impeachment of Chief Commissioner at the Commission for Investigation of Abuse of Authority (CIAA), Lokman Singh Karki.

Meanwhile, President Bidhya Devi Bhandari on Wednesday called Minister for Health Ramjanam Chaudhary to her office and inquired about Dr KC's condition. Sources at the president's office said President Bhandary had also inquired about the steps taken by the ministry to fulfill the demands.
Earlier in the day, Speaker Onsari Gharti met Dr KC and took note of his condition. She also expressed her commitment to drawing the attention of political parties and the government to the demands put forth by him.   Speaker Gharti also did not forget to suggest to Dr KC to take care of his health and suspend the ongoing hunger strike, keeping in mind the ongoing political instability.

Doctors attending to Dr KC said his condition may deteriorate further and require emergency medical management at any time.

Meanwhile, hundreds of patients at TUTH suffered great inconvenience on Wednesday as well, as resident doctors pursuing their MD/ MS degrees under the Institute of Medicine (IoM) are shunning the out-patient Department (OPD).

Accusing the authorities of turning a deaf ear to Dr KC and ignoring his deteriorating condition, the resident doctors have decided to boycott the OPD services for an indefinite period.

Patients who reached TUTH were compelled to wait for hours to be examined by senior doctors. These doctors  cannot attend to all the patients, as it is the resident doctors who deal with a majority of the patients. Around 2,000 patients from across the country visit TUTH every day.

Protesting students who have shunned the OPD services have, however, continued providing in-patient services, emergency care and services at the ICU and CCU.

He has demanded that all seats at medical universities run by the government be made free, at least one government medical college be established in all the federal provinces, no affiliation be given to any medical, dental or nursing college in Kathmandu Valley for the next 10 years, and fee ceilings be implemented from this year as fixed by the Ministry of Education, the universities and Nepal Medical Council.

Transparency International, the global coalition against corruption, and its chapter in Nepal have issued a press release on the Nepal... Read More...