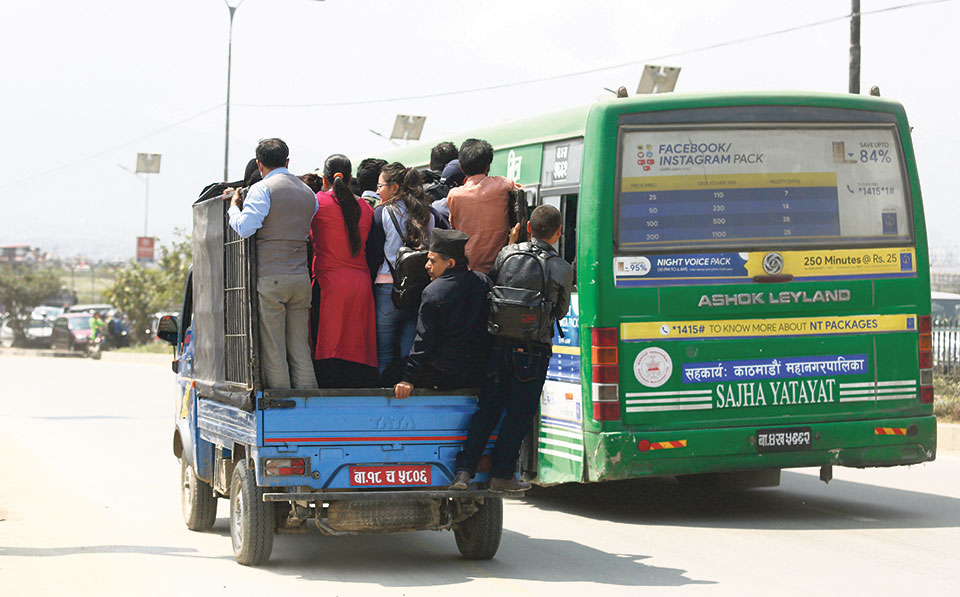 Some people opted to travel standing up in a pickup truck during Friday's transport strike. The picture was taken at Koteshwar. Photo: Dipesh Shrestha/ Republica

KATHMANDU, May 5: Coming down heavily on those protesting against the abolition of the transport cartels, the government on Friday decided to scrap route permits of all defiant public vehicles, freeze the bank accounts maintained in the names of the transport entrepreneurs' committees and associations and also announced to investigate the property of their office bearers.

Scores of office bearers of the agitating transport committees and associations were arrested from across the country as the government showed no sign of conceding their demands, according to the home ministry. In Kathmandu, the government removed hoarding boards of all public transport syndicates from New Bus Park, Gongabu, while sparing only those registered under the Companies Act as stipulated in the Transport Management Work Procedures Directives 2060 (Amended).

Officials at the Department of Transport Management (DoTM) said they have begun scrapping the route permits of public vehicles not providing services on Friday. In Kathmandu, route permits of 26 micro buses operating from Sinamangal to Nepal Airlines Corporation Office, New Road were scrapped in the first phase, according to a spokesperson for DoTM, Tulasi Ram Aryal.

Spokesperson Aryal said other district-based transport management offices have also scrapped route permits of a number of public transport vehicles. "We are still collecting details from across the country. We are determined to scrap any forms of syndicates or cartels in the public transport sector. There will be no compromise," he further said. "Further action will be taken as per the existing laws from tomorrow [Saturday]."

The newly introduced legislation allows authorities to arrest those disrupting public services and fine them Rs 1,000 or slap them a jail term of six months or both. As the public transport strikes on Friday left thousands of ordinary public affected across the country, the government also arrested scores of the office bearers of defiant public transport committees and associations.

As of 8 pm Friday, police arrested 82 persons including General Secretary of Federation of Nepal National Transport Entrepreneurs Saroj Sitaula. Officials said they will continue to book them as per the existing laws as they are involved in disrupting public transport service, according to Home Ministry Spokesperson Ram Krishna Subedi.

Vehicle owners' committees and associations advocating syndicate in public transport have threatened an indefinite strike from May 10 apparently to put pressure on the government to revoke its decision to ban transport cartels. In a bold move against organized transport syndicates, the government on April 18 had decided not to renew any transportation committees, forcing all transport entrepreneurs to come under the Companies Act to be eligible to operate public transport services.

KATHMANDU, May 8: With the public transport operators formally agreeing to operate under the Companies Act, the Ministry of Physical Infrastructure... Read More...

KATHMANDU, Dec 16: The Supreme Court has issued a mandamus order to the government to take necessary steps to end all... Read More...

Salaries and allowances of Speaker, Deputy Speaker withheld until court’s decision
10 hours ago