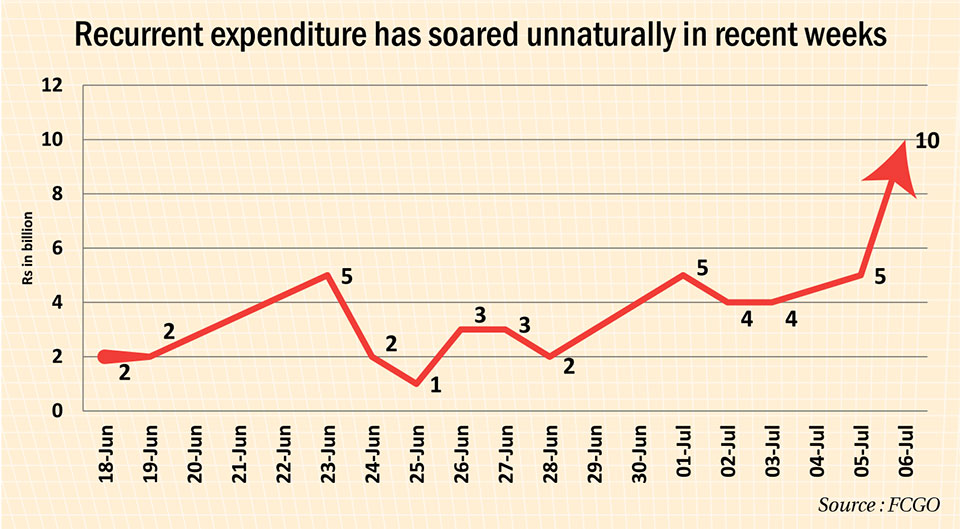 KATHMANDU, July 9: The white paper which Finance Minister Yuba Raj Khatiwada unveiled on March 30 painted a grim picture of the country’s economy showing various instances of gross violations of financial discipline and fiscal rules and regulations by the previous government.

Spending on the unproductive sector by both private and public sectors was his next assessment in the white paper. But the technocrat-turned-politician who had vowed to bring sweeping reforms to address the anomalies in the economy has done nothing to change the way of doling out of state funds in the eleventh hour of the fiscal year, which ends on July 16.

Minister Khatiwada is doing the same as his predecessors in the handling of the state coffers. His ministry, which administers the state coffers, has made a recurrent expenditure of Rs 10 billion which was mainly spent for meeting the expenses of public offices including paying the salaries, and electricity and water bills, among other things on Friday alone. Such spendings have soared in an unnatural way in recent weeks.
Such spending was only Rs 4 billion and Rs 5 billion on Wednesday and Thursday respectively, but the spending doubled to Rs 10 billion on Friday, according to an analysis of daily budgetary status of the Office of the Financial Comptroller General, the agency that keeps records of the state coffers. Such spending of the capital budget, too, soared to Rs 7 billion on Friday from the daily average of less than half a billion rupees.

Sources at the Ministry of Finance say that nothing has changed when it comes to doling out the taxpayer money in the eleventh hour though the current government had made a commitment to economic prosperity and progress through development.

It seems the finance minister has turned a blind eye to the massive distribution of state resources in the eleventh hour as officials of the district treasury controller offices nationwide are busy issuing checks to make payments, said government accountants who are not allowed to talk to the media.

A retired government accountant said that most of the checks, particularly those meant for recurrent spending, issued in the eleventh hour are being issued only to empty the state coffers. He added that such payments are made in collusion with the payment-receiving parties, accountants and chiefs of the government offices.

In the white paper, Minister Khatiwada had also lambasted private sector banks for investing only in the non-productive sector. He had also said that the foreign assistance received was not being used effectively.
According to economists, such spending in the eleventh hour is irrational, and is a breach of all financial rules and regulations and also an unproductive use of the taxpayer money.

“This huge spending on a single day cannot be justified and it’s a brazen breach of financial discipline,” said economist Keshab Acharya, who compared the government’s haphazard spending with ‘helicopter money’ coined by the late economist Milton Friedman to explain the doling out of money in an irrational way.
“We have not seen any change in the public finance management as everyone is violating the rules and regulations like the past governments. We can see a race ongoing to blacktop the roads in Kathmandu and elsewhere with the sole motive to empty the state coffers. This does not yield the expected results,” said Acharya.

“The capital spending was hovering at around 15 to 20 percent two months back and now it has seen an artificial growth to over 50 percent,” added Acharya.

Former finance minister Ram Sharan Mahat said that such a huge expenditure made on a single day could mean only one thing, that is the government is making doleouts using the state coffers. “Both paying the bills in the last minute and issuing checks in the eleventh hour are anomalies in the public financial management,” said Mahat, adding that the current government has also not made public the information about the budget transfers since it came to power.

Rs 9.80b wiped off from market after Maoists quit govt