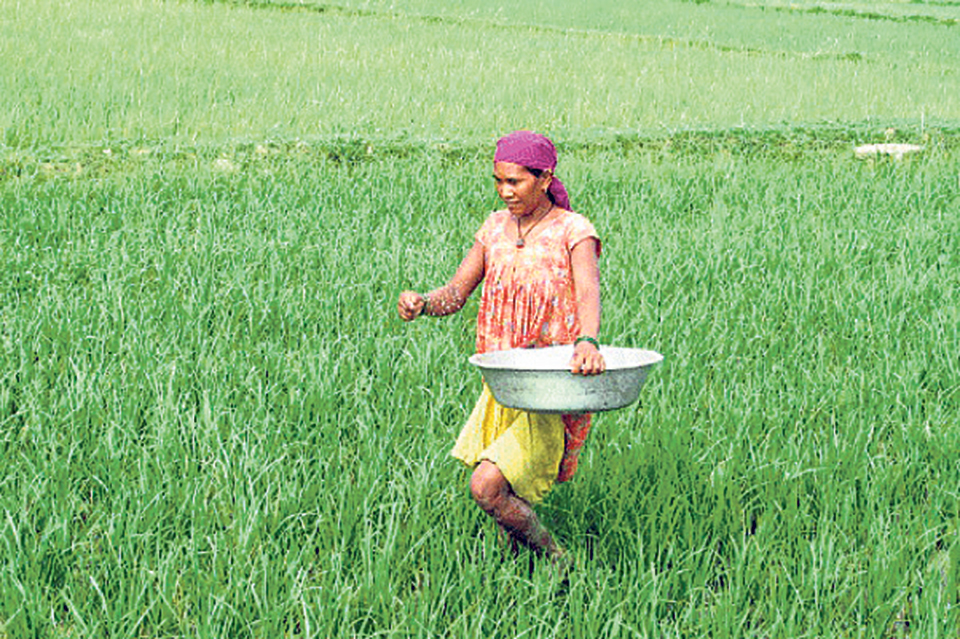 KATHMANDU, June 10: Although the government has been reiterating its promise on adequate supply of chemical fertilizers during the rice transplantation season, the farmers this year too are likely to suffer from the perennial problem.

According to the Ministry of Agriculture and Livestock Development (MoALD), 100,000 tons of Urea that it is supposed to bring to the country by June end, is likely to delay by additional one and a half months. The ministry has blamed the delay on the lockdown in India at the wake of the threat of Covid-19. “With the closure of the sea port authority office and lack of manpower due to the lockdown, the loading/unloading work at the port has completely halted for around a month and a half,” Agriculture Secretary Rajendra Prasad Bhari told Republica Online.

According to the MoALD, of the 50,000 tons of fertilizer stuck at the Kolkata port, the ministry diverted 21,500 tons of the agricultural input to the Kandala port of Gujarat. Bhari said the effort to bring the fertilizer on time by using the alternative port also went in vain, despite the ministry’s successive talks with the Indian authorities.

The government earmarked a budget for 450,000 tons of the subsidized fertilizers this year. This quantity is in excess by 100,000 tons than the one the government provided last year to the farmers.

Despite the government’s claim, the delay has dented the chance to benefit the farmers as the rice transplantation season will soon start at full swing. The paddy cultivation season lasts for four months from May to August. Normally, the harvest continues until mid-July. In some cases, farmers carry on transplantation till August-end depending on the rain.

While the ministry is showing the pretext of the coronavirus for the delay in the arrival of the fertilizers of the first lot, an additional 50,000 tons that is being imported from the third countries is expected to take another one and a half months just to reach the Kolkata port in India, according to the MoALD.

The agriculture ministry records show that the annual demand for chemical fertilizers currently stands at around 800,000 tons while official imports are just around 386,000 tons. Subsidized fertilizer covers only one-fourth of the country’s total need, while the rest is met by informal imports or shipments smuggled through the open border with India.

The MoALD however has claimed that it has already distributed 25,000 tons of chemical fertilizers in excess to the amount of the last year. Issuing a press statement, the ministry has cautioned the traders and cooperatives not to charge exorbitant prices for the government-subsidized fertilizers to the farmers.

Meanwhile, the Department of Hydrology and Meteorology has said that the monsoon this year is likely to take another week to start, with a delay in the development of low pressure lines in the country. Starting from mid-June, the rainy season usually lasts till mid-September. In around four months, the country receives an average of 1,496 mm of rain which is around 80% of the country’s rainwater round the year.

BAITADI, June 28: Farmers are facing problems in transplantation of paddy due to scanty rainfall. Farmers, who used to depend... Read More...

BHAKTAPUR, Nov 18: Bhaktapur is known as the district of farmers. However, every year this district faces a shortage of... Read More...