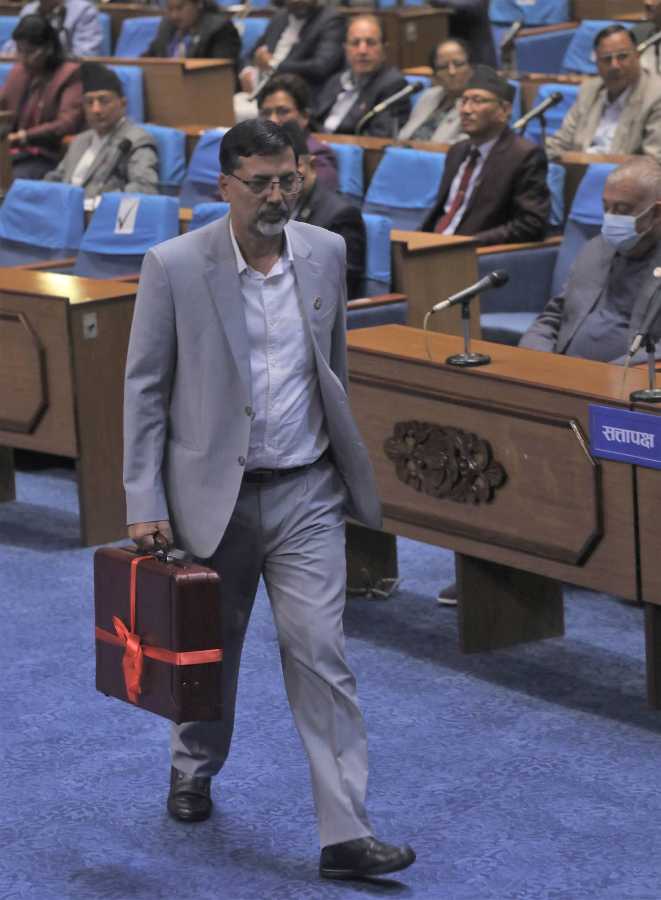 KATHMANDU, May 29: The government has announced a total budget of Rs 1.793 trillion for the fiscal year 2022/23, which is 8.86 percent more than the budget for the current fiscal year.

Presenting the budget at a joint meeting of parliament on Sunday, the Finance Minister Janardan Sharma put forth the aforementioned expenditure amount for the next fiscal year, which is Rs 146 billion more than the amount allocated for the current fiscal year. Last year, the CPN-UML government led by KP Oli announced an ordinance-based budget of Rs 1.647 trillion, which later on, was revised to Rs 1.632 trillion by the current Finance Minister Janardan Sharma.

Similarly, the budget has allocated Rs 380 billion (21.2 percent) for capital expenditure compared to Rs 374 billion for the current fiscal year. A total of Rs 230 billion has been arranged for financial management. A total of Rs 400 billion will be provided as fiscal grants to the provincial and local governments.

Of the allocated expenditure, the government has targeted to finance Rs 1.240 trillion from revenue mobilization. For the rest of the amount, the government will be collecting a domestic borrowing of Rs 256 billion and foreign loans of Rs 242.26 billion while Rs 55.46 billion will be managed from foreign grants.

Meanwhile, the government has raised the minimum slab of income tax for an unmarried individual to Rs 500,000 from Rs 400,000 per annum. Similarly, the threshold for a married person has been increased to Rs 600,000 from Rs 450,000 per year. It means the person falling in this threshold now pays only one percent tax for social security contributions.

KATHMANDU, May 22: The government is likely to announce an annual budget of Rs 1.723 trillion for the next fiscal year... Read More...

KATHMANDU, July 3: The Ministry of Finance (MoF) has refused to provide the CCTV footage of the ministry’s activities on the... Read More...

Finance Ministry asks to call at 1138 or write at budgetsuggestion@mof.gov.np to provide suggestions for new budget

KATHMANDU, March 31: While expediting preparation of the budget for the fiscal year 2022/23, the Ministry of Finance (MoF) has operated... Read More...