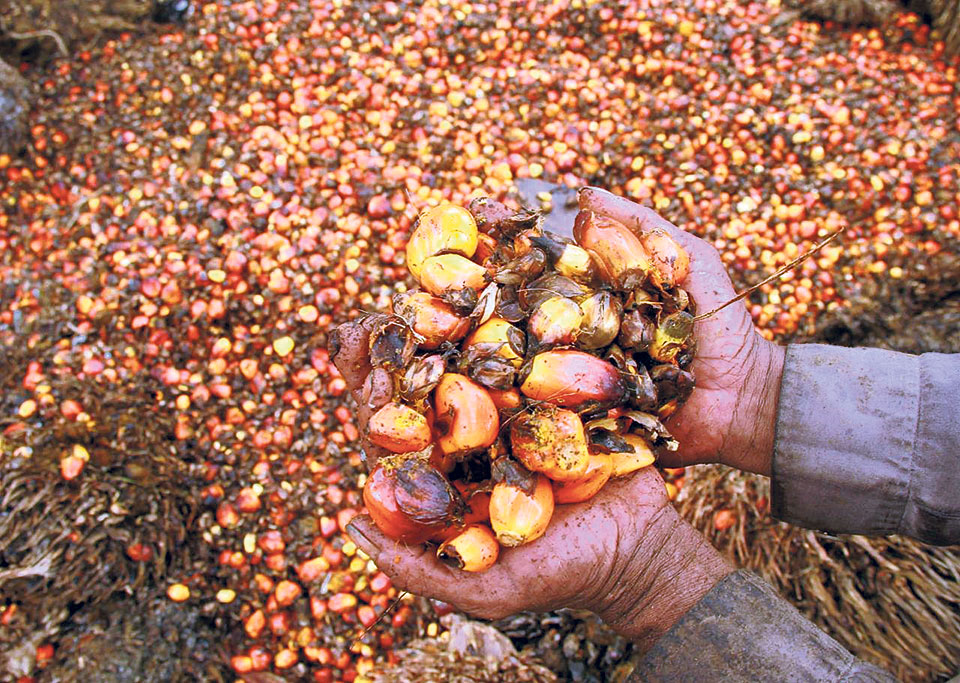 KATHMANDU, Jan 25: The government is sending a high level delegation team to request the Indian government to rethink on its decision to restrict palm oil that was being exported from Nepal.

Minister for Finance Yuba Raj Khatiwada on Friday told the traders that the restriction measure enforced by India on palm oil trade is likely hit the country's trade deficit that had eased in the past few months. “The government is sending a delegation team consisting of high level officials to solve the problem through bilateral talk,” said Khatiwada speaking at a program organized to mark the 40th annual general meeting of Nepal Foreign Trade Association.

Since last year, palm oil has emerged as one of the major contributors to the nation's exports, helping the government to reduce the ballooning trade deficit to some extent. The record of the Trade and Export Promotion Centre shows that the country in the first five months of the current fiscal year, exported palm oil worth Rs 11.5 billion, which accounted for 24% of the total export earnings of Rs 47.61 billion.

The export earnings during mid-July to mid-November stood nearly eight times that the country had shipped in the same period last year. With soaring export of palm oil in particular, the country's export earnings went up by 27%, taking down the trade deficit by 6.3%.

However, the country's escalating export earnings is likely to be hit by the Indian government imposing restriction on the import of palm oil on January 8. Through utilizing the provisions of the South Asian Free Trade Area (SAFTA), Nepal had been enjoying duty free access on the product that is claimed to be more than 30% value addition.

Following the restriction imposed by India, the government has sent a letter to the southern neighbor requesting to ease the import of palm oil by the Indian traders. “We have sent letter via the Ministry of Foreign Affairs, but have not received any reply so far,” said Navaraj Dhakal, joint secretary at the Ministry of Industry, Commerce and Supplies (MoICS). Dhakal however expressed his ignorance on forming the high level team for negotiating with the Indian government.

Giving an instance of how export of vegetable ghee and zinc oxide affected by the Indian restriction in the past, Khatiwada said that the palm oil export has now faced the similar situation. The southern neighbor has been applying quantitative restrictions on four items of Nepal that include acrylic yarn, copper utensils, vegetable ghee and zinc oxide.

In 2002, when these Nepali products were in heyday of their exports, India had come up with the restrictions. Since then, traders are allowed to export 5,000 tons each of copper utensils and zinc oxide to India annually. The yearly quota for vegetable ghee is 100,000 tons.

Although Nepal has been putting forth the issue in almost every bilateral trade talk, India so far has turned unheard to Nepal's plea. “Citing the evidence in the past, there is a little hope that India will consider request of Nepali side regarding the restriction on palm oil,” said an official of MoICS on condition of anonymity.

KATHMANDU, June 30: Nepal in the current fiscal year has got some respite from the ever-worsening trade position with the... Read More...

Demand for palm oil resumes after a month

KATHMANDU, Jan 10: Nepal’s export is likely to take a hit with the Indian government’s decision to impose restriction on... Read More...