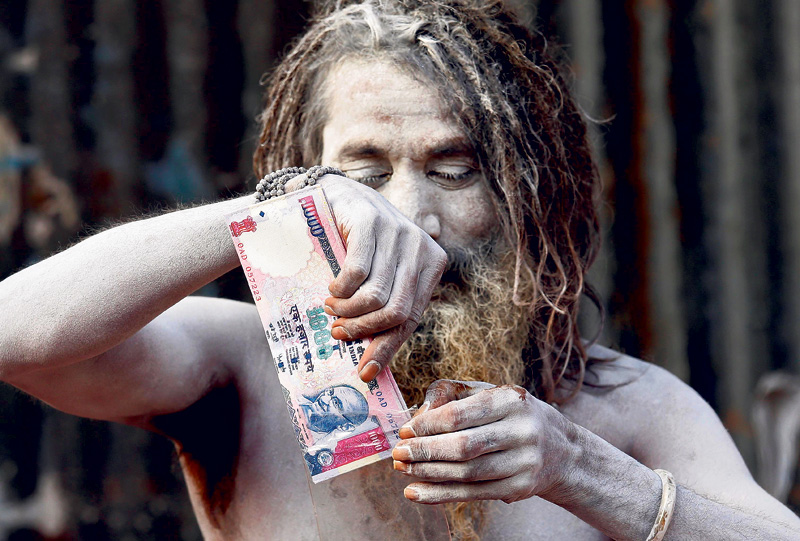 A sadhu puts a wallet –– decorated with a print of the scrapped Indian 1,000-rupee note, which he received as a gift from a devotee, inside a plastic cover at a makeshift shelter in Kolkata, India, January 5. Photo: Rupak De Chowdhuri/Reuters

KATHMANDU, Jan 9: A government team is visiting India this week to discuss the fate of demonetized 1,000 and 500 rupee banknotes in Nepal with Indian officials.

Responding to the Indian government’s invitation to discuss the fate of demonetized Indian banknotes in possession of Nepal, the Ministry of Finance (MoF), via the Ministry of Foreign Affairs (MoFA), has showed interest to visit India this week to resolve the problem, according to a senior Nepal Rastra Bank (NRB) official.

“We have proposed to the Indian side to hold a meeting this week for finding a solution to the Indian currency problem,” Bhisma Raj Dhungana, an executive director of the NRB, told Republica.

According to sources, the Indian government has invited Nepali officials, via the Embassy of India in Kathmandu, to discuss the fate of demonetized Indian banknotes in Nepal. The date of the visit, however, has not been fixed yet.

“We are awaiting the response of the Indian government. A team of government officials will visit India once the date is fixed,” Dhungana, who is also the chief of the Foreign Exchange Department of the NRB, said.

Though the Indian government has invited Nepali officials for the dialogue, it has not clearly stated whether it would provide exchange service for the scrapped Indian banknotes that Nepali banks as well as public legally possess.

Dhungana told Republica that they would request the Indian government to provide exchange facility for the amount that is in the banking system as well as for public for Indian currency they are authorized to hold.

A Nepali national is allowed to hold up to IRs 25,000. Similarly, bank and financial institutions (BFIs) have told the central bank that they possess a combined IRs 33.6 million.

The Indian government invited Nepali officials to discuss the issue after the deadline for Indian people to exchange the scrapped notes expired on December 31. Non-resident Indians and Indian nationals, who were outside the country during the period, however, are still getting exchange facility.

Earlier on November 8 last year, the Indian government had withdrawn the legal tender of 1,000 and 500 rupee banknotes. The sudden decision has also created uncertainty over the fate of such banknotes in Nepal.

The government, including Prime Minister Pushpa Kamal Dahal, has already requested his Indian counterpart to provide exchange facility for scrapped banknotes that Nepali banks and public hold. Though India has not refused to provide such facility, it has also not given a clear response on whether it would accept such notes.

KATHMANDU, March 2: A two-member team of Reserve Bank of India (RBI) has held discussions with the officials of Nepal Rastra... Read More...

KATHMANDU, Nov 26: The high-ranking government officials have held discussions regarding the projects to receive assistance from China under the... Read More...

Govt under pressure to transfer funds from development projects to non-budgetary headings: Finance Ministry
20 hours ago

Oli, Nembang and Kharel might have a different version of constitution: Senior advocate Thapa
11 hours ago