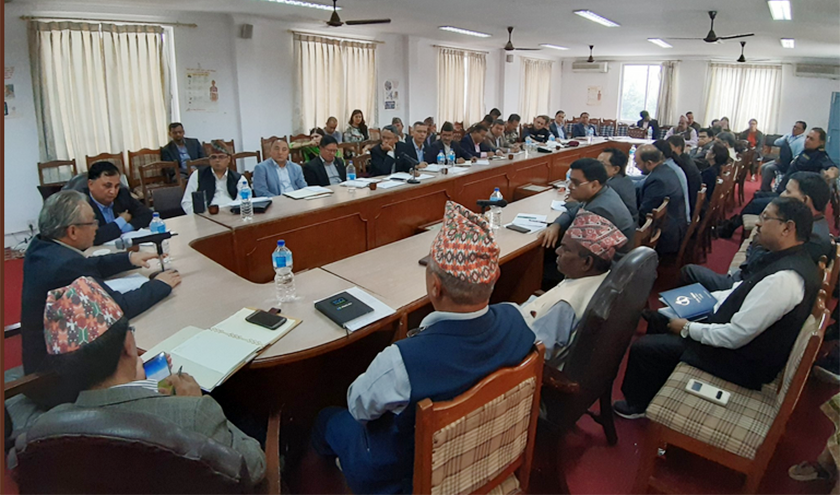 Local units to be asked to lead rescue and relief effort

KATHMANDU, July 14: A meeting of the Central Disaster Management Committee has decided not to seek foreign help for now for rescue, relief and rehabilitation work in the face of ongoing flooding. It says the government is capable enough to handle the crisis on its own. The committee headed by Home Minister Ram Bahadur Thapa has instructed all federal, provincial and local authorities to conduct rescue and relief operations and mobilize available resources and manpower to that end.

“We are capable enough to handle this situation on our own. Local governments across the country will take the lead in distributing relief and in rehabilitation of the victims,” Minister for General Administration and Local Development Lalbabu Pandit told Republica.

“This level of disaster is manageable. We will seek support from the international community if we face a greater crisis,” he said .

Secretary at the Ministry of Home Affairs Prem Rai also said that the government is capable to handling the crisis on its own and will seek international help only if there is a bigger crisis.

But most other members of the committee and other participants of the meeting rejected the proposal, saying the country's internal resources and capabilities were adequate enough .

The meeting has also decided to release budget funds from the committee and from the Prime Minister's Relief Fund as and when requested by provincial and local governments.

Pandit said apart from 27,000 police personnel, some 8,000 from the Nepal Army and 8,150 from the Armed Police Force (APF) are being mobilized to the flood-hit areas for rescue work.

“They are being asked to coordinate with local governments and conduct their rescue operations keeping in mind the state of the weather and their own safety.”

In view of possible inundation in several southern districts bordering India, rescue helicopters and personnel are on the alert in Itahari, Kathmandu and Nepalgunj.

Ministers and secretaries from key ministries dealing with the disaster and essential relief supplies , the chiefs of the security agencies and representatives of Nepal Red cross Society were also present at the meeting.

The committee has instructed all agencies concerned to restore essential services such as power and transport at the earliest.

No Alternative to Deuba as NC PP leader : Purna Bahadur Khadka
19 hours ago