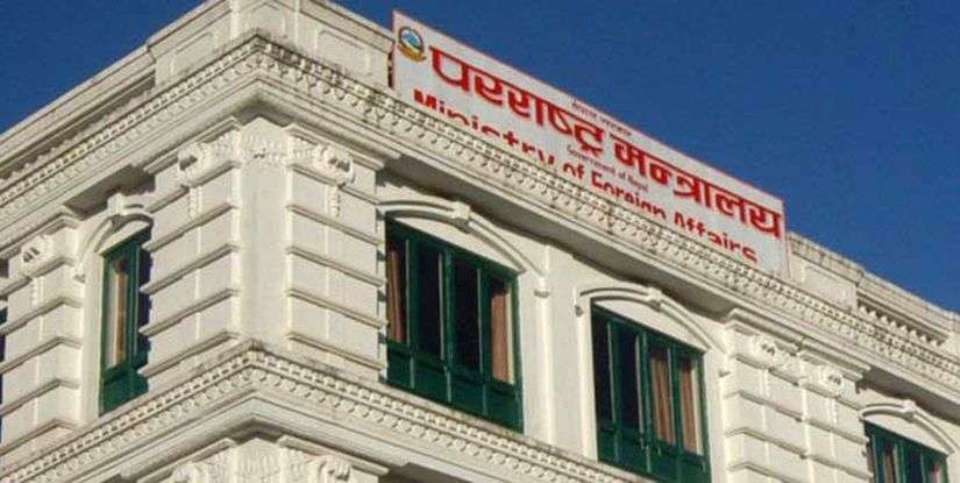 KATHMANDU, July 9: The government has made it mandatory for the office bearers and other officials of provincial and local governments to receive permission from the Ministry of Foreign Affairs (MoFA) prior to holding meetings with the representatives of foreign governments, diplomatic missions and INGOs.

A new set of directives on the work procedure to be followed by province and local level governments while establishing contacts with foreign governments, missions, representatives and international organizations has also stated any such foreign institutions or representatives seeking meetings with province and local level officials must channel their communication through the MoFA.

The directives published in the Nepal Gazette on July 1 state that the officials of the provincial or local governments wishing to hold meetings with foreign governments, missions, representatives and international organizations must write to the MoFA in advance while giving details about the agenda of their meeting.

The directives, which seek to regulate external contacts of provincial and local government officials after the country embraced federal model of governance, also provide guidelines for any commitment or statement that may be made during such meetings with foreigners. The jurisdictions over the country’s foreign policy and foreign engagements rest with the federal government as per the Constitution of Nepal, 2015.

As per the directives, the provincial and local government officials are not authorized to make any commitment or statement that go against Nepal’s relations with its neighbors and Nepal’s regional and international commitments. Similarly, the provincial and local government officials, who may take help of translators upon requirement, must be in proper uniform and follow proper diplomatic etiquette during such meetings.

The directives also restrict the officials of the provincial and local governments from making foreign visits without prior permission from the MoFA. They are required to correspond about any such visits strictly through the MoFA channel.

This comes amid growing tendency of provincial chief ministers and other officials making visits abroad without the knowledge of the federal government.

As per the directives, the provincial and local government officials are required to take consent from the Ministry of Finance as well while going abroad for observation visits, study visits or academic study under scholarship offered by any development partners.

The participation of representatives of Nepal’s diplomatic mission in the concerned country should be ensured as far as possible while holding important bilateral meetings.

Upon their return home, the officials are required to submit a copy of the report of their visit to the MoFA and also make it public through their official website.

The officials of the provincial and local governments must inform the MoFA even if they are making personal visits abroad. The permission for chief minister to visit abroad shall be granted by the Council of Ministers of the federal government.

The directives have also tightened the screws on the provision of establishing sister relations of Nepal’s cities with foreign cities. It is mandatory to receive prior consent from the MoFA and the Ministry of Federal Affairs and General Administration before reaching such an arrangement.

This arrangement comes in the wake of the officials of various local bodies reaching agreement on sister city with foreign governments without prior consent form higher authorities in Nepal. Among other things, both the provincial governments and the local governments are required to inform the MoFA and the concerned Nepali diplomatic mission abroad before making any interaction and exchange of visits.

KATHMANDU, Jan 29: Minister for Foreign and European Affairs of Luxembourg, Jean Asselborn, is arriving in Kathmandu on Wednesday on... Read More...