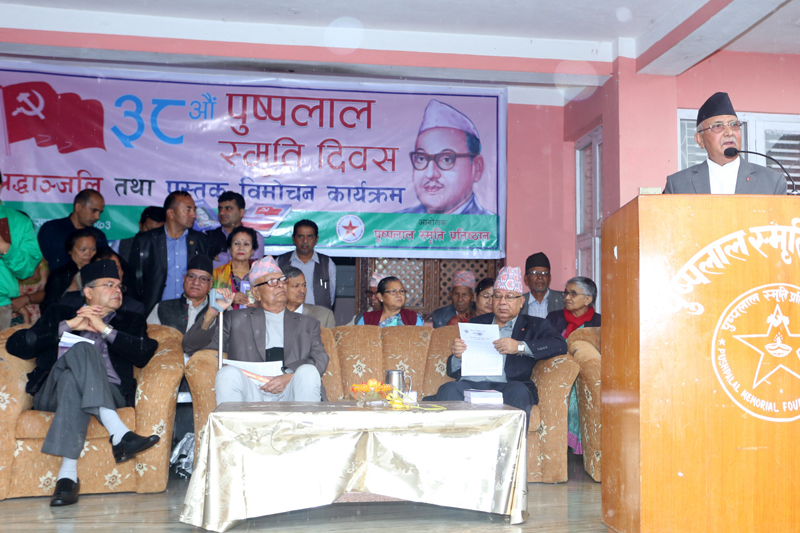 KATHMANDU, July 22: Prime Minister K P Sharma Oli today has said that the activities to change the government were a conspiracy against the country.

Speaking in a program organized by the Pushpalal Memorial Foundation on the occasion of 38th Memorial Day of Pushpalal today in the capital, PM Oli said that the conspiracy was made by different power centers to destabilize the politics and aiming at disturbing the election process so as to make the country without representatives.

He added that the opposition parties were also creating hindrances to amend the existing acts and developing new acts required for elections.

PM Oli added that the Nepal communist party's founder general secretary Shrestha’s thoughts were being propagated worldwide and people's leader Madan Bhandari made it time- relative propounding the doctrine of People's Multi-Party Democracy. Stating that the CPN (UML) will play effective role to institutionalize the achieved success, he said "We were entangled in a kind of labyrinth but we will get victory over it."

PM Oli said the CPN (Maoist Centre) deceived the people and county leaving the government saying that the party will regret its decision soon.

Foundation Chairman Madhav Kumar Nepal expressed concern that if elections do not take place within the next one and a half years, the constitution will not be implemented. He stressed on need for the top three parties to seek a national consensus to give the country an outlet. He also suggested for developing Ramechhap's Bhangeri area, where Pushpalal Shrestha was born, as a place of historic significance.

On the occasion, Pushpalal's statue was garlanded while 'Pushpalal' and 'Navayug' magazines' special editions were launched. RSS

Omicron coronavirus variant found in multiple US states
15 minutes ago

NC releases banner for its general convention
16 minutes ago

Both Thapa and Lingden announce their teams, 235 delegates nominated to the convention
24 minutes ago