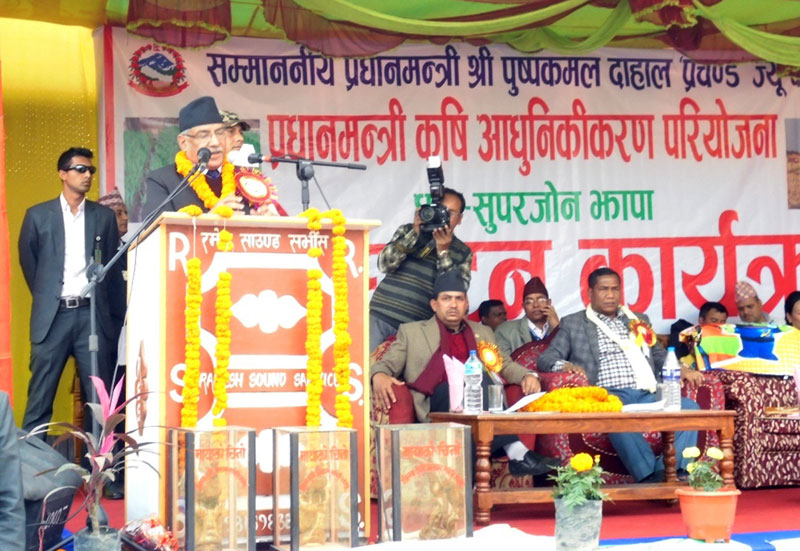 BHADRAPUR, Jan 3: Prime Minister Pushpa Kamal Dahal has said that the government's policy is to increase the attraction of youths towards agriculture by making quantitative growth in production in the sector.

Inaugurating the paddy-super zone program under the Prime Minister's Agriculture Modernization Project at Baniyani of Jhapa on Tuesday, he said the super zone program has been introduced in all the seven proposed provinces, with a focus on paddy in Jhapa.

Expressing happiness over the rise in agro productivity this year, the Prime Minister said it is with increase in agriculture production that the country's economic, social and political advancement was possible.

On a different note, Prime Minister Dahal said unity among the parties was inevitable for stability and prosperity of the nation. "The date for the upcoming elections would be announced soon based on coordination, collaboration, unity and dialogue among the parties," he said.

On the occasion, the Prime Minister also pledged to support the development of the Kechana-Charali road, construction of the Mechi bridge and promotion of the lowest place in Nepal, Kechana Kawal.

Likewise, Chief Whip of the CPN-UML, Bhanu Bhakta Dhakal, pointed out the need of keeping the agro sector in priority for the development and prosperity of the country while Nepali Congress leader and former Home Minister, Krishna Prasad Sitaula, expressed the view that the Nepali people should be united for sustainable peace and development.

Meanwhile, PM Dahal inaugurated Paddy-super zone program at Baniyani and paddy plantation through the use of machine today itself.

KATHMANDU, Sept 19: Prime Minister Pushpa Kamal has said the government was serious toward addressing the grudges of the Madeshi,... Read More...