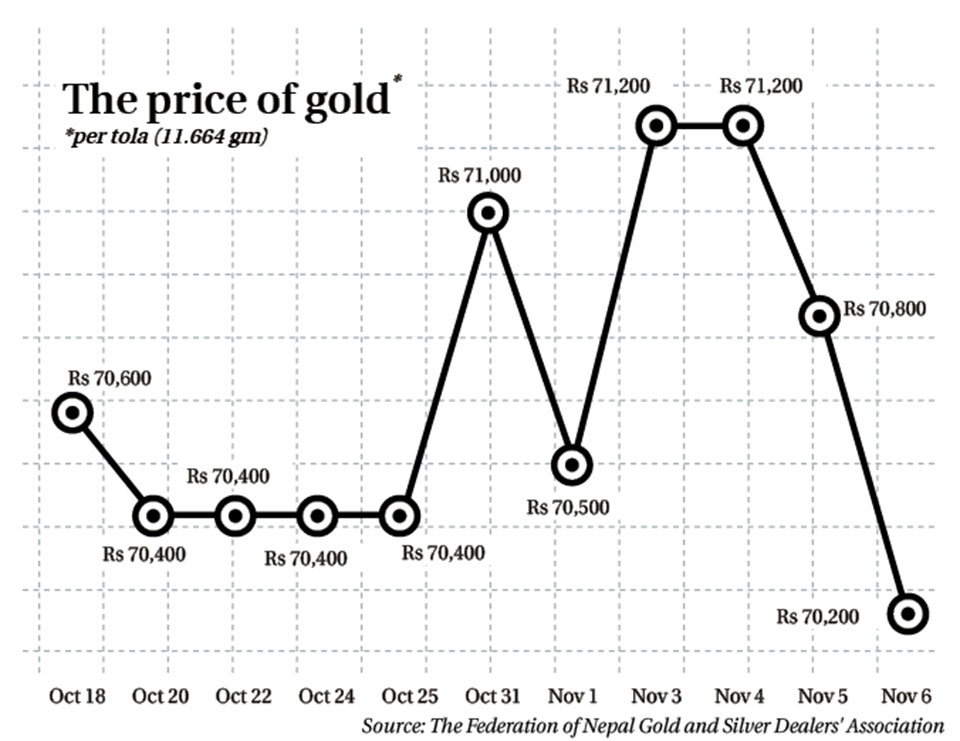 Dealers, however, say prices will continue to fluctuate

After a rally that lasted for nearly five months, gold price fell on Wednesday in line with the movement of the price in international market amid expectations that the US and China will sign a deal to prevent the escalation of ongoing trade war, say traders.

However, officials of the Federation of Nepal Gold and Silver Dealers' Association do not see gold price becoming stable. They say the price of the yellow metal will increase further. "We do not see any chance of the correction in price to the level before five months," said Dharma Sundar Bajracharya, general secretary of the association.

The price of gold has been rising steadily since July with occasional falls. It hit a record high of Rs 73,500 on September 4.

“The price saw some decline after China and the US agreed to hold a meeting for resolving their long-running trade dispute. The expectation among investors that the pact to deescalate the trade tension has led to the decline in the price,” added Bajracharya. He added that the price of gold depend on the relationship between these superpowers. "But analysts are not hopeful of heavy price correction in the international market. So, people should not expect that the price will go down significantly,” he added.

This year gold traders sold gold worth nearly Rs 7 billion during Tihar festival. According to dealers, sales during Tihar provided them a much-needed respite in the business of gold and silver as the increase in price had pushed down the demand for precious metals in the domestic market. The main reason for increased gold sales was Dhanteras, a day during the Tihar festival which considered auspicious day for gold buying.

While traders say that the daily demand for gold used to be up to 50 kg during high season and 10 kg during lean season, there was a slowdown even during the high season this year. The demand is slowly rising after the end of festive season, according to dealers. However, they see annual sales falling this year compared to last year.

“The demand is increasing even during off-season, albeit slowly. We are also seeing rise in demand for gold from dealers. But we cannot distribute them as per the demand as we get only 20 kg from dealers per day," said Bajracharya.

Besides festive season, gold buying increases during wedding season. "Though wedding season is approaching, we are not much hopeful as fluctuating prices could put off buyers," he added.

Gold price up by Rs 2,400 per tola in local market