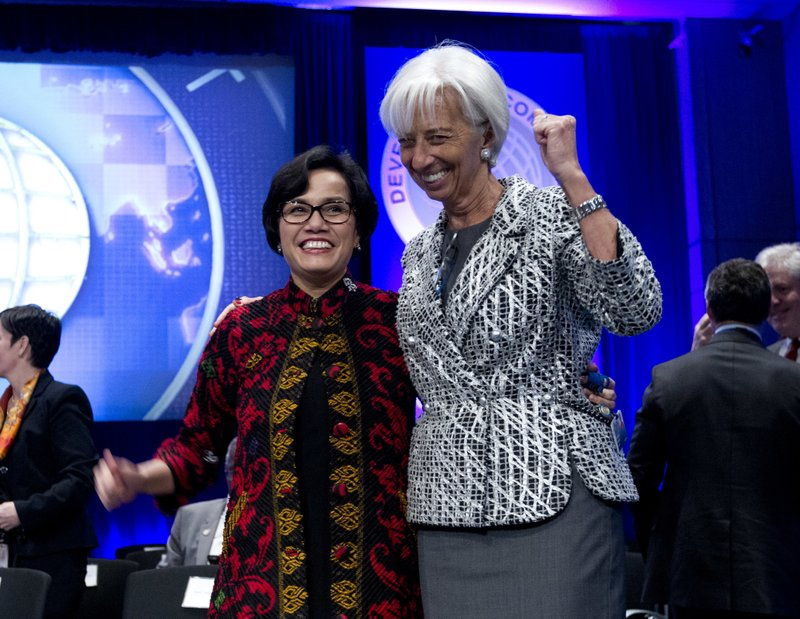 WASHINGTON (AP) — Global finance leaders on Saturday dropped a sharp condemnation of trade protectionism and references to climate change from a closing statement that wrapped up the spring meetings of the 189-nation International Monetary Fund and the World Bank.

This year's meetings were dominated by a debate over how to respond to a rising tide of anti-globalization sentiment evidenced in the United States by the election of President Donald Trump, who pledged during last year's campaign that he would reduce America's huge trade deficits which he blamed for the loss of millions of good-paying factory jobs.

In its communique, the IMF urged nations to avoid "inward-looking policies," but it did not include tougher language the IMF had used in an October statement in which it had called on all countries to "resist all forms of protectionism." The new statement also dropped any mention of the threat of climate change.

Trump has threatened to impose punitive tariffs of up to 45 percent against Mexico, China and other nations he believes are competing unfairly with American workers. During his presidential campaign he called climate change a hoax.

At a closing news conference, IMF Managing Director Christine Lagarde and Agustin Carstens, head of the Bank of Mexico and chair of the IMF's policy committee, sought to downplay the changes. Lagarde noted that strong language condemning protectionism and promoting efforts to combat climate change, while taken out of the communique, remained in a separate document setting out the IMF's policy agenda.

Carstens said that it was important on the issue of trade to recognize the viewpoints of different countries.

"We all want free and fair trade and that is what is reflected in the communique," he told reporters when asked why the language on protectionism had been dropped.

A similar change on the issue of protectionism was made in a communique that the Group of 20 major economies issued last month in Baden-Baden, Germany. Steven Mnuchin, attending his first international gathering as Trump's Treasury secretary, had defended the change in the G-20 communique by saying, "The historical language was not really relevant."

Eswar Prasad, a trade economist at Cornell University, said the changes in the IMF and G-20 communiques showed the Trump administration's desire to signal that U.S. policy will be different under a new president.

"The G-20 consensus on issues such as free trade and combating climate change is crumbling in the face of the Trump administration's hostility to those positions," Prasad said. "The notion of allowing for freer trade has run up against the Trump administration's conviction that its major trading partners are manipulating trade and currency policies to their own benefit."

"The United States is probably the most open trading market there is," Mnuchin said.

"We want to create a system where the average American can do their taxes on a postcard, not a book," Mnuchin said. "Maybe a big postcard, but you can still stick it in the mail."

Mnuchin did not provide details of the tax plan, which Trump has said would provide a "massive" tax cut for Americans.

Throughout the presidential campaign last year, Trump pointed to closed factories around America and said they represented a failure of past presidents to be tough enough in negotiating trade agreements to protect U.S. jobs. Since taking office, Trump has pulled the United States out of a 12-nation Pacific trade agreement negotiated by the Obama administration and just this week ordered the Commerce Department to speed up an investigation into whether steel imports posed a national security threat. His action could lead to higher tariffs on steel imports.

The spring IMF and World Bank meetings took place against the backdrop of an improving global economy, helped by better performances in the United States and China, the world's two biggest economies, and in a rise in commodity prices which has helped many developing nations. The IMF's latest economic forecast projects global growth of 3.5 percent this year, which would be the fastest pace in five years and up from 3.1 percent last year.

Despite the brighter outlook, the IMF's closing communique warned of a number of risks ranging from weak productivity growth to high debt levels and "heightened political and policy uncertainties."

The world economy has struggled to regain millions of jobs lost after a devastating financial crisis hit in 2008 and the finance leaders acknowledged the adverse effects the deep-downturn, playing a major role in the rising pressures against free trade and immigration.

German Finance Minister Wolfgang Schaeuble said that if more was not done to deal with growing income inequality "we will see more protectionism and countries retreating from globalization."

Japanese Finance Minister Taro Aso sought to downplay concerns about rising protectionism, saying that he believed free trade, which has fueled global growth since the end of World War II, would be upheld but perhaps with some changes.

In his remarks to the IMF's policy committee, Mnuchin repeated a call for the IMF to police the currency markets and call out countries that undervalue their currencies to gain an unfair price advantage for their exporters.