Girona a hard nut to crack for Barcelona 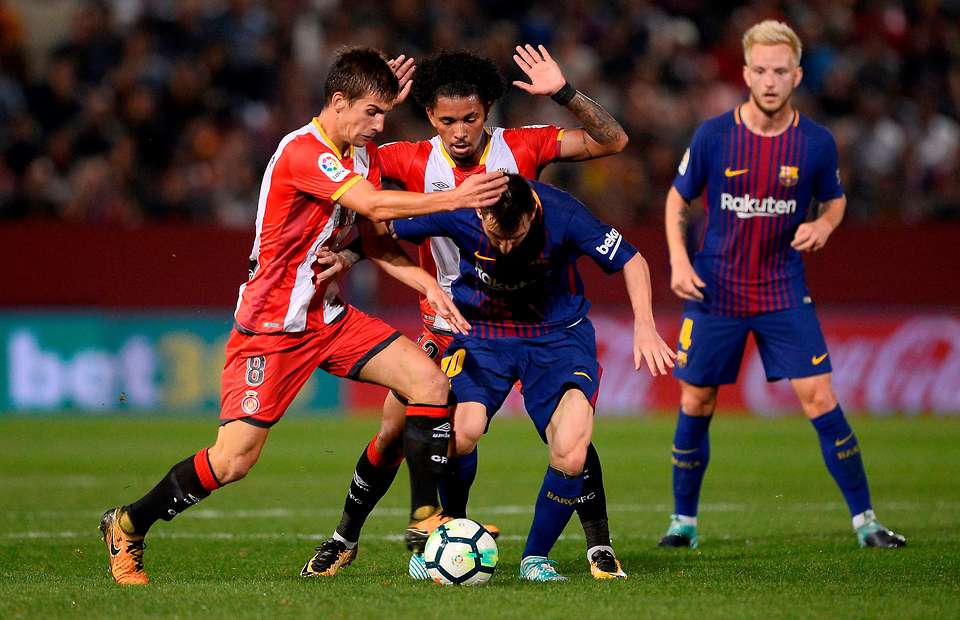 KATHMANDU, Feb 23: Barcelona hosts its Catalan counterpart at the Camp Nou on Saturday in a bid to increase its points difference at the summit of La Liga, before second-placed Atletico Madrid travels to the Ramon Sanchez Pizjuan to take on Sevilla the next day.

Barcelona had a frustrating week in light of its performance, yet got results it needed. The Catalan side defeated Eibar 2-0 away on February 17 and secured a 1-1 draw at the Stamford Bridge some two days ago. The performance was not satisfying as both the games were concerned, but managed to stay seven points above Atletico Madrid, who also won 2-0 against Athletic Bilbao nearly a week ago, and gained an all-important away goal against Chelsea going into the second leg on March 15.

Barcelona has had an unimpressive figure of inconsistent performances throughout the season. From getting beaten 1-0 by local rivals Espanyol to beating teams like Real Madrid 3-0 at the Spanish capital team’s own backyard. The season, well, talking about the results, has gone wonderfully for Barcelona so far. Having won 19 matches and drawing five in the 24 games it has played so far this season, Barcelona is cruising for yet another league title, if it continues in the same pace, but the performance was less than delightful against both Eibar and Chelsea.

Barcelona had a possession of 53.4% against Eibar with just 10 shots compared to 13 of the home team, with just six on target and managing to score two from that.

Against the English champions, Barcelona was occupied by the likes of Ngolo Kante and the three center backs: Cesar Azpilicueta, Andreas Christensen, Antonio Rudiger.

Having been allowed just seven shots in the Chelsea goal, Barca managed to hit just two on target the entire match. Well, it had a possession of a gigantic 73.1%, but that was for nothing when two early Willian shots rattled both the sides of the bar, and a clinical effort turning into a goal in the 62nd minute. Despite equalizing in the 75th minute through Lionel Messi, his first against Chelsea, was little seen as a good performance, but a terrific result, having failed to defeat Chelsea since February 22 of 2006.

Barcelona now takes on a newly-promoted Girona, who has been playing brilliantly most notably including a 2-1 win over Real Madrid, a thumping 6-0 win over Las Palmas and drawing 1-1 against Atletico at the Wanda, is seen less as an easy match, and more as a match which Barcelona should win, as it takes on Atletico after over a week.

Team news
Barcelona, currently, has no players injured as Thomas Vermaelen and Ousmane Dembele recovered from their respective problems and were on the bench against Chelsea.

So, Barca might field Marc-Andre ter Stegen in goal again, but Thomas Vermaelen may start for the leaders, given the fact that it has a hectic schedule coming on with games against Las Palmas and Atletico inside three days. Likewise, Barca might start with Nelson Semedo as he was suspended against Chelsea, and with Lucas Digne as Jordi Alba is just a card away from suspension, or he might be rested against Las Palmas to stay fresh for the Atletico clash.

Barca will most likely field Sergio Busquets and Ivan Rakitic in the center of the park, with Sergi Roberto, either to start from the midfield or in the right-back role and with Philippe Coutinho in the left, to give Andres Iniesta, who started against Eibar and Chelsea, a rest.

The forward line might as well be the same with Lionel Messi and Luis Suarez, but Barca coach Ernesto Valverde might go for Dembele this time around.

Girona is a player short in Pons Riera Pere, who is doubtful for the Barca match as he is suffering from a calf injury.

It might start with Yassine Bounou between the sticks, along with Jonas Ramalho, Bernardo and Juanpe in the center back roles, but it also would like to test Marc Muniesa, who has not played for Girona since January 27.

Alex Granell, Borja Garcia and Aleix Garcia would most likely play for the away side, but coach Pablo Machin might want to go with just two center midfielders, and two wide midfielders in Johan Mojica, Aday or Pablo Maffeo.

The forward line might as well be the same with Cristian Portu and Cristian Stuani.

Head-to-head
Having only had the privilege of playing against its sweet local rival just once in an official competition, Barcelona had registered a 3-0 win away in the league in September.

Recent form
Barcelona is without a doubt a top contender for the match, but dwelling in a series of poor performances, it might suffer against Girona. The midfield has to be on top in the game, and the leaders might not get a chance of getting rewarded with two own goals this time around.

Messi’s last goal in a domestic competition was against Alaves in the league on January 29, and has so far, not scored in five games, albeit Copa del Rey or league matches. But, his 20 league goals should say something in this game.

Girona’s forward pair of Portu and Stuani have scored 22 goals together in the league, and that might be a serious problem, if Barcelona fails to capitalize on its chances.

So, Girona might be really dangerous for Barcelona as it stays in the eighth place with 34 points and has won nine, drawn seven and lost just eight matches. It won’t be that easy to get past Girona and is a hard nut to crack for its Catalan rival.

POKHARA, March 12: Shutdown enforced by different political parties on Friday and Saturday has affected many tourists as many of them... Read More...