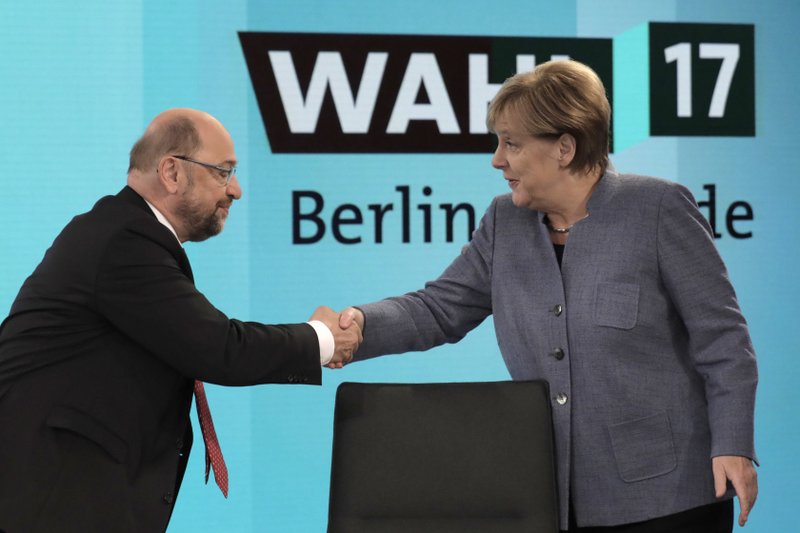 BERLIN, Sept 25:  German Chancellor Angela Merkel was embarking Monday on a complicated quest to form a new government for Europe’s biggest economy and find answers to the rise of a nationalist, anti-migrant party.

Sunday’s election left Merkel’s conservative Union bloc weakened after a campaign that focused squarely on Germany’s leader of the past 12 years. However, the result leaves no other party able to lead a new government, and Merkel herself lacks any obvious internal challenger.

The center-left Social Democrats — Merkel’s partners since 2013 in a “grand coalition” of Germany’s two traditionally dominant parties — vowed to go into opposition after a heavy defeat.

Caucus leader Thomas Oppermann doubled down on that pledge Monday, saying that “we will not conduct coalition talks, because voters have decided that the Social Democrats’ place is in opposition.”

“All of us, all the parties have the responsibility of giving this country a stable government,” Peter Tauber, the general secretary of Merkel’s Christian Democratic Union, told ZDF television. “And a coalition can only be successful if it is able to make compromises.”

Germany has no tradition of minority governments, and Merkel has already made clear she doesn’t want to try that option — which would in any case be a tall order, as her bloc has only 246 of the new parliament’s 709 seats.

That means the only politically plausible option is a three-way coalition with the pro-business Free Democrats and the traditionally left-leaning Greens. The combination, called a “Jamaica” coalition because the parties’ colors match those of the Caribbean nation’s flag, hasn’t been tried in a national government.

Merkel faces lengthy talks to secure an alliance with parties that have a tradition of mutual suspicion as well as differences on issues including migration, European financial policy and the auto industry’s future.

At the same time, she faces pressure from conservative allies for an effective response to the third-place finish of the nationalist Alternative for Germany, or AfD, which entered parliament for the first time after a campaign that centered on harsh criticism of Merkel and her 2015 decision to allow in large numbers of migrants.

AfD took voters from Merkel’s bloc and to a lesser extent from the Social Democrats, while also mobilizing large numbers of people who didn’t previously vote.

“Of course I want to win back everyone who voted for AfD and previously voted for us,” Tauber said. “To do that, we have to confront AfD clearly and show that we have the better answers.”

KATHMANDU, Feb 21: With just 83 days left before the election date proposed by the government, it will be hugely challenging... Read More...