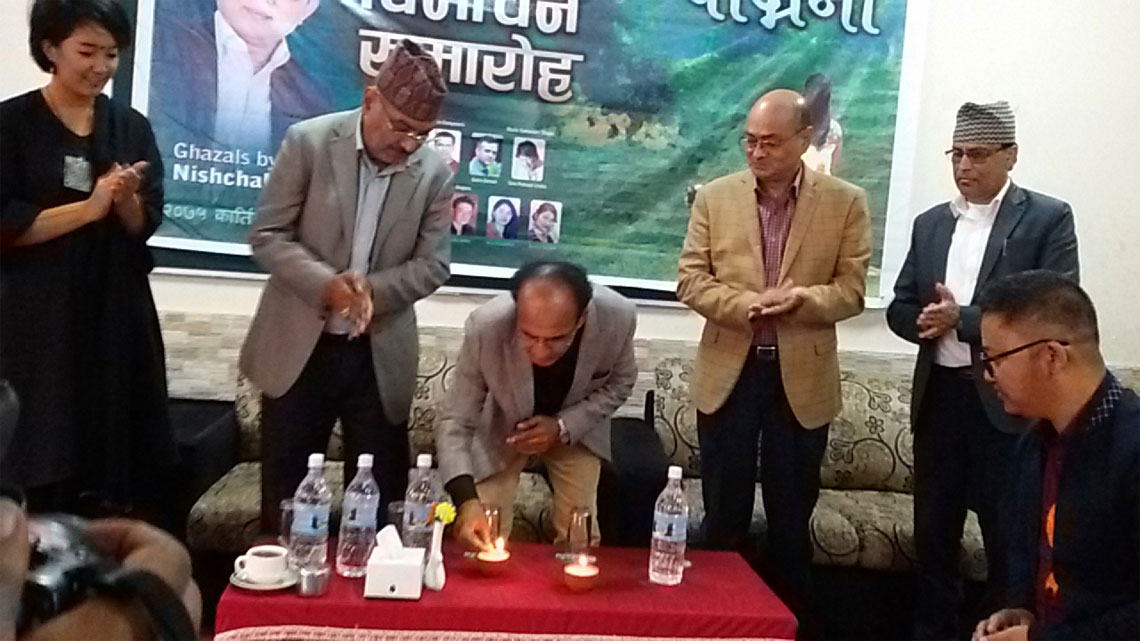 Senior Lyricist, Writer and Critic Dr. Krishna Hari Baral lighting a lamp to inaugurate the release of 'Padmeenee', a gazal album, in the capital on Monday. (Republica)

KATHMANDU, Nov 5: 'Padmeenee', an album of gazals by Nishchal PS, was released amid a special function in the capital on Monday. Nischal's debut music album 'Padmeenee', which contains six gazals, revolves round the themes of love and separation.

The album is produced by Eli  Phombo Limbu while the Padmeenee Entertainment Pvt. Ltd. is the sole distributor.

Commenting on the music album, Dr Baral said, “Padmeenee, which deals mostly with the reality, is a fusion between love and separation. Nishchal PS has set a brick among thousands to the field of music.” He expressed hope that it would fare well in the future.

Similarly, Devkota has said that the lyricists have a great role in promoting the entire music field as they are the major investors.

Speaking at the program, Senior Composer Shakti Ballav stressed relentless efforts to succeed in the field of music.

Journalist, Writer and Critic Ramesh Paudel marked fusion between composition and lyrics in Padmeenee and added that its fate, however, will be decided by the listeners.

Nishchal PS, who has already authored Sisyphus Jeevan to his credit, expressed commitment that he would continue making music videos of all gazals contained in the album in future. Among six, one song ‘Kahan Kahan Khojen Timilaee’ has been composed into music video and released on Monday itself.

The program was coordinated by Padam Ningleku.