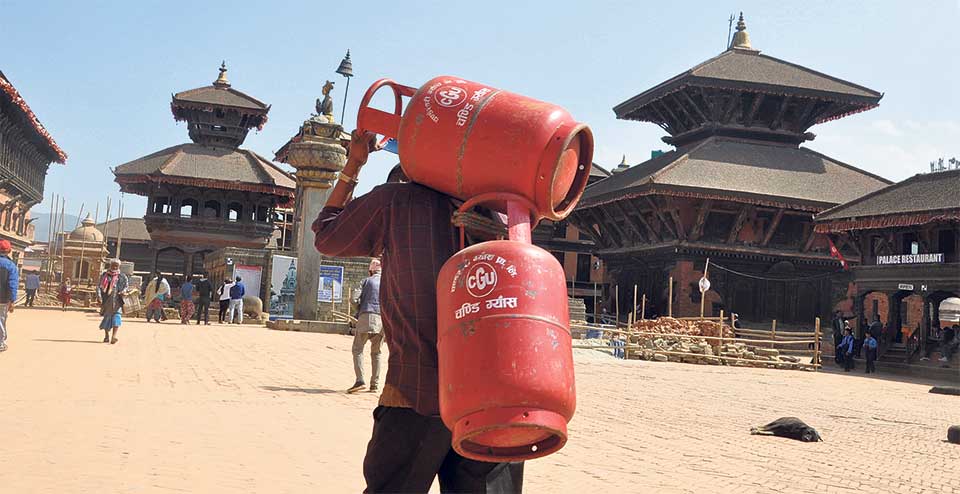 Regulatory authorities in blame game against each other

KATHMANDU, Dec 24: Most of the gas industries in the country have been found to be operating their bottling plants too close to human settlements, in a clear violation of government standards.

Lack of coordination among the authorities responsible for giving permits to gas plants--Department of Industry (DoI), Nepal Oil Corporation (NOC), and the standard monitoring authority Nepal Bureau of Standards and Metrology (NBSM)--has been the main reason for the plants running freely despite not meeting the standards.

A large number of gas plants have been established in Dhading, Banepa of Kavre, Chitwan, and Jhapa, most of which do not meet the government standards.

Plants have been operating against the legal provision that gas plants should be at least five kilometers away from human settlements and also away from each other.

According to LP Gas By-laws 2065 BS, the gas plants should be at least five kilometers away from human settlements. The by-laws also state that a gas plant should not be set up within a distance less than five kilometers from an existing plant. Also, the plants need to have proper security systems and emergency plans in order to overcome possible mishaps like fire and leakage of gas from the plants.

The NOC and DoI have been neglecting the aforementioned criterion while permitting the set-up and operation of the gas plants.

Officials of NBSM said that only 10 percent of the existing gas plants are being operated as per the by-laws and almost the same number do not have proper safety measures.

"Out of the total 55 plants, only five to seven meet the standards recommended by the law," said Biswa Babu Pudasaini, director general of NBSM. "They have been operating without proper management and planning. Most of the industries do not have emergency plans for possible mishaps in and around the plants."

The NOC and DoI officials concede that there have been faults and irregularities in operation of gas industries, but try to come clean by blaming each other. Officials of DoI say that the matter is solely technical and that the NOC is responsible for it.

"The case of gas is a technical one and the NOC is mainly responsible for regulating the sector," said Shankar Aryal, director general of DoI. "Plants come into operation only after the corporation analyses technical aspects of the plant. Monitoring of the plants is also not possible by our department. The NOC is responsible for it."

However, NOC officials say that the NOC is only responsible for supplying raw materials to the gas plants and other things are beyond the corporation's field of work.

“Our corporation is only the supplier of raw materials to the plants. The DoI and NBSM should monitor the plants," said Sushil Bhattarai, executive director of NOC. "Lack of Petroleum Act and Explosives Act in the country has also been major problem in the regulation of such plants."

Gas plant promoters have been claiming that they have been running the plants as per government regulations. “We have been following the government's instructions and regulations. No industry wants accidents in and around its premises,” said Gokul Bhandari, president of LP Gas Industries Association.

Security concerns regarding LP gas plants came to highlight after a fire broke out in Birganj's Super Gas Industry on December 20, claiming lives of two people.

BIRGUNJ, Dec 22: Preliminary investigation has blamed negligence on the part of the Super Gas Industry for the massive fire in... Read More...