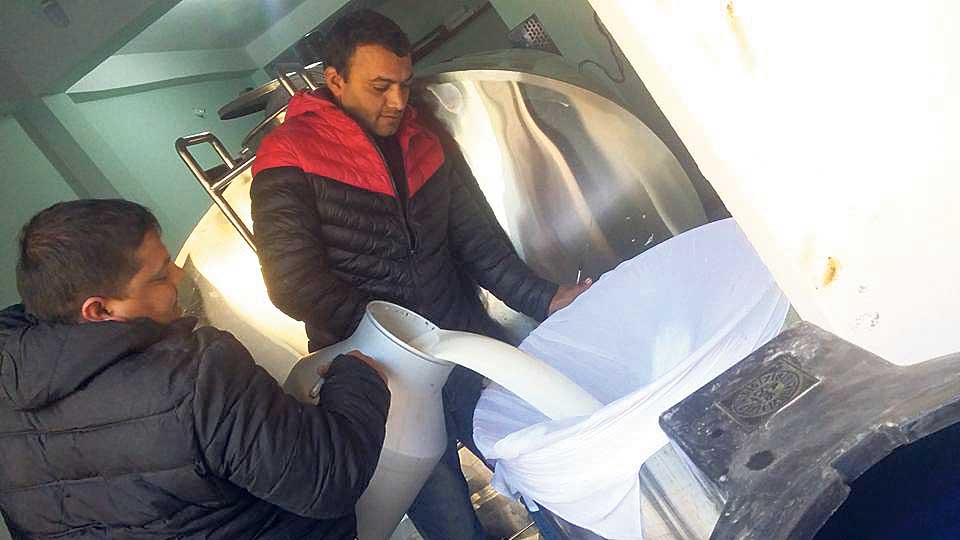 Farmers pour milk into a container at the Small Farmer Milk Collection and Distribution Center in Galyang. Photo: Mohan Gurung/Republica

SYANGJA, Jan 20: Galyang Municipality has established a Small Farmer Milk Collection and Distribution Center at Galyang Bazar-3 of the municipality, at an investment of Rs 12 million.

Of the total investment, Rs 3 million was jointly contributed by Tulasi Bhanjyang Small Farmer Cooperative and other local organizations. The municipality has allocated the rest Rs 9 million for milk collection center through its budget of Fiscal Year 2017/18.

The collection center has opened in 10 branches in different places of the municipality. The municipality has provided free milk analyzer to all the 10 branches. The analyzer will help measure the quality of milk that will determine the price.

Dal Bahadur Sinjali, president of Small Farmer Milk Collection and Distribution Center said that farmers in the municipality were not getting proper price for their hard work, and hoped that the situation will change now.

“We have good production, but there is lack of market,” Sinjali said. “Now this organization will play a role of bridge between the farmers and the market.”

Bhupraj Adhikari, mayor of Galyang Municipality, said that the municipality has a target of establishing their municipality as a city of the milk.

After the establishment of the collection center, approximately 1,000 liters of milk is being sold to Lumbini Milk Distribution Center every day.

President Sinjali said that they have a target to increase the quantity up to 10,000 liters of milk per day. The collection center is buying milk at the rate of Rs 45 to Rs 75 per liter from the farmers, depending on quality of milk