Fun in the sun: Courtney Stodden caught in throes of passion 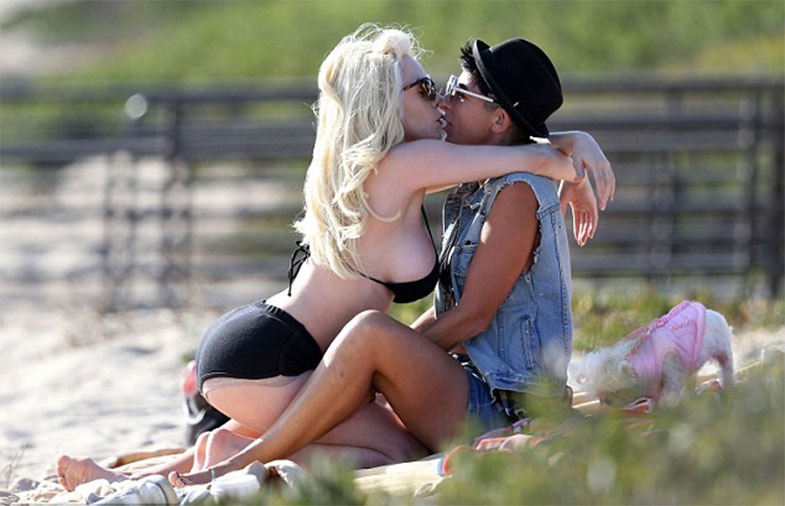 She's been spending time with Doug Hutchison, 56, since suffering a devastating miscarriage over the summer.

But Courtney Stodden's husband was nowhere to be seen as she enjoyed a steamy smooch on the beach in California recently.

The object of the 23-year-old reality star's desire was a mystery woman, and the pair only had eyes for each other as they were caught in the throes of passion on the sand.

Resting between the brunette's legs, Courtney threw her arms around her companion as they locked lips.

Clad in a skimpy black bikini, the busty blonde could barely contain her ample chest which spilled out of the scanty fabric.

She teamed the garment with a pair of tiny shorts that clung to her perky posterior as she paraded her incredible figure along the beach.

Doug and Courtney celebrated their five-year wedding anniversary in May by renewing their vows.

Doug, whose career came to an end when it emerged he had begun a relationship with a 16-year-old to whom he was giving acting lessons, has talked of the fall-out caused by their relationship.

KATHMANDU, May 15: The Commission for the Investigation of Abuse of Authority (CIAA) on Monday filed a corruption case against Tapendra... Read More...

KHOTANG, May 13: Police have recovered the body of Suman Shrestha, 12, one of the three children, who was swept... Read More...

At Maltese festival, climbing greasy pole is part of the fun

MALTA, August 29: For more than a century, locals in the small Maltese town of St Julian’s have celebrated their patron... Read More...