Fringe parties have a say in new govt formation, thanks to fractured mandate

KATHMANDU, Dec 9: With the Election Commission (EC) releasing the final results of the November 20 elections to the members of House of Representatives (HoR), the two major political parties — Nepali Congress (NC) and CPN-UML — have shown interest in forming the next government. But the fractured mandate of the election has made fringe parties with fewer seats in parliament decisive in the formation of a new government than the first and second largest parties.

Given that there has not been any serious negotiation to form the next government comprising NC and the UML, it is certain that one of these parties will be in the government and the other in the opposition in parliament. Both the NC and UML will have to garner the required majority seats in parliament with the support of CPN (Maoist Center), Rastriya Swatantra Party, Rastriya Prajatantra Party and Janamat Party. The role of CPN (Unified Socialist) that has won 10 seats in HoR is equally important in the new mathematical equation in parliament.

A party needs to garner the support of a total of 138 members in the HoR to form the next government. The NC had forged a pre-poll alliance with the Maoist Center, Unified Socialist, Loktantrik Samajbadi Party (LSP) and People’s Front Nepal (PFN). As the final results of the PR electoral system were announced on Wednesday, the Maoist Center has won a total of 32 seats, Unified Socialist 10 seats, LSP 4 seats and PFN 1 seat in parliament.

Even if the NC is able to keep the alliance intact, it will have the support of only 136 lawmakers — short of two members to secure majority seats in parliament. This fractured mandate received by the major political parties in the election has made fringe parties with fewer seats more powerful in the new political dispensation. 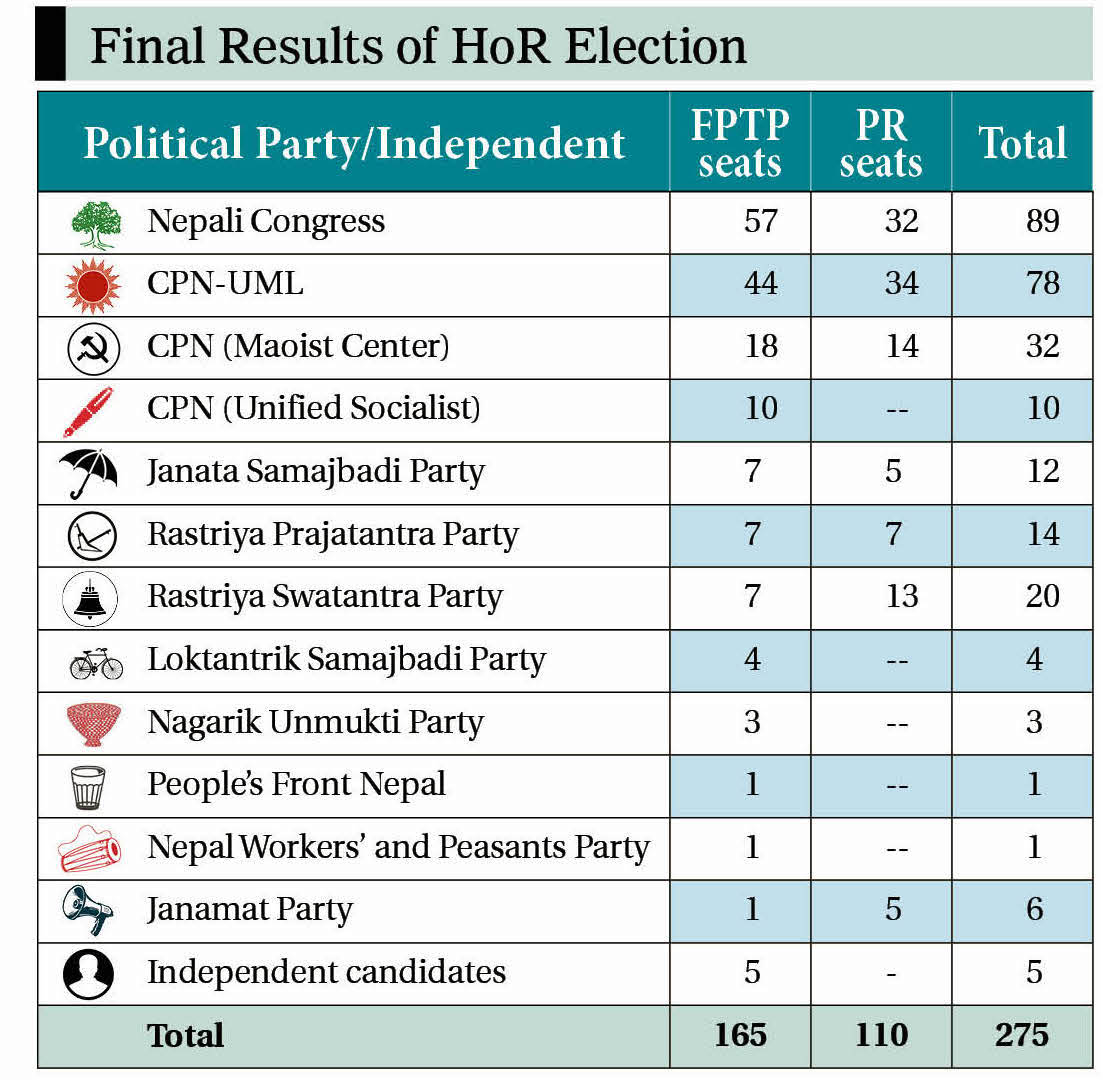 Senior NC leaders said the fractured mandate in the election has made fringe parties decisive in the formation of a new government. “We have already started negotiations with the Janamat Party that has a total of six seats in parliament. We are simultaneously holding talks with other fringe parties as well to make the government strong enough,” said a leader, sharing that some of these fringe parties have demands disproportionate to their actual strength in parliament.

The NC leader, who asked to remain anonymous, said the UML has offered the Maoist Center the prime ministerial berth to appease Pushpa Kamal Dahal. “The largest political party is entitled to form the new government in any democracy. But the fractured mandate in the election has made smaller parties have a say in new government formation,” he added.

Man arrested for raping his daughter-in-law
15 hours ago

US investment in Nepal is not the product of any geopolitical dynamics: USAID Administrator Power
1 minute ago