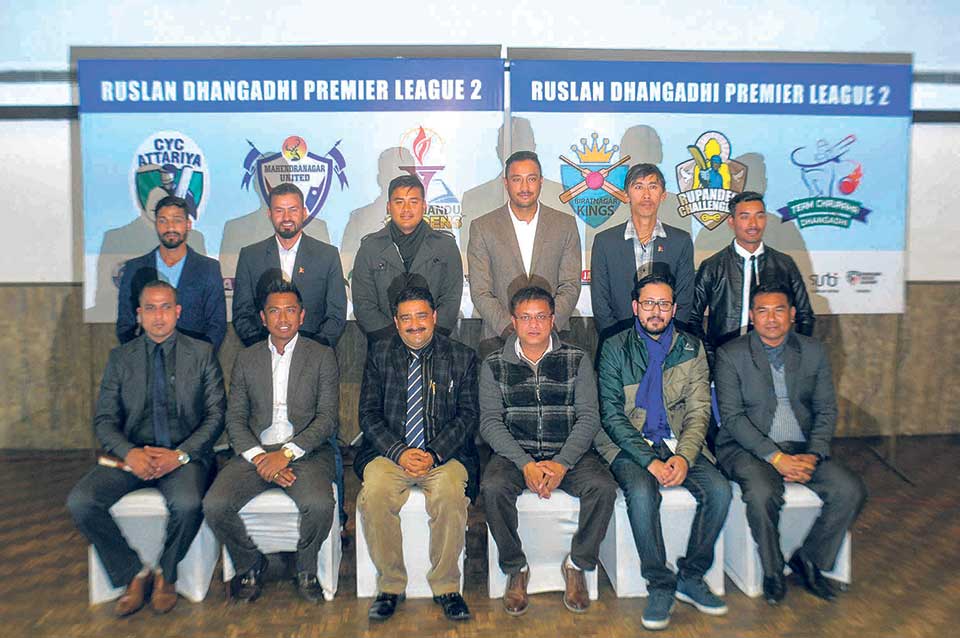 Team owners with their respective strategic players pose for a group photo during an unveling program in Kathmandu on Wednesday. Photo: Bijay Gajmer/Republica

KATHMANDU, Jan 25: The second edition of the franchise cricket tournament Dhangadhi Premier League (DPL) has unveiled the franchises, owners and the strategic players on Wednesday. Six teams will participate in the second season of the DPL.

The Team Chauraha skipper Paras Khadka from last edition will strategize Biratnagar Kings this season whereas the latter team selected Sompal Kami as the designated marquee player. Sharad Vesawkar, who led Kings to final in the last edition of the tournament will miss the tournament due to personal reasons.

The players to be registered in the auction are categorized into four groups. The first category includes national team players with at least 15 international matches or those representing Nepal in the last three years.  The DPL teams will be required to buy a maximum of three players and minimum of two for their squads, while the second category comprises of all remaining national players, age-level players and camp players. A minimum limitation of three players has been defined.

Likewise, the third category, with minimum limitation of five players to be included in each team, features all the other uncapped players and the fourth category features the local players from Far-western region.

Similarly, the base price of the strategic players is Rs 200,000 and every team can have 14 players each in their sides which include two foreign players and a player from Talent Hunt to be held in Dhangadhi must be featured compulsorily.

The chairman of the biggest franchise cricket tournament of Nepal Subash Shahi said that the tournament was possible with the hard work of everyone, not just the organizing committee.

“I would like to thank all the people who worked very hard to make this tournament possible, and not just the organizing committee,’’ Shahi said, “And, mostly the team owners who invested for their respective teams.’’

The chief guest of the program Nepal cricket team head coach Jagat Tamatta expressed his happiness that these kind of tournaments for getting continuation in Nepal. “I am very grateful to Subhash for organizing such tournaments which helps in taking the game forward and makes a platform for young Nepali cricketers,’’ Tamatta said.

“We have given continuation in the team from the first edition of the tournament and we are participating in order to participate to repeat the past success,’’ Shrestha said.
“I feel very happy to be selected in this team and very confident to do well since we are the home team and we will get good support from the crowd,’’ Kami said.

Kathmandu Goldens
The Managing Director of Golden Gate Education Network Ramesh Silwal is the owner of Kathmandu Golden, while the vice-captain of the national team Gyanendra Malla is the strategic player.

“It is not a small thing to organize these kinds of tournaments in Nepal and I would like to thank Subhash for that. Even though, this is the second edition of the DPL, but I am involved with Dhangadhi and the academy,’’ Silwal said.

“This tournament will help in uplifting the standard of cricket in Nepal and we can see new players who will be crucial to take Nepali cricket forward,’’ Malla said.

CYC Attariya
The owner of CYC Attariya is the President of Srijanshil Yuwa Club Nar Bahadur Rai and the strategic player is Nepal U-19 cricket team’s skipper Dipendra Singh Airee.

“I am getting involved in these kinds of events for the first time in my life. We do business, but I believe social activities and sports should also be taken together for the betterment of the nation,’’ Shrestha said.

“I am very grateful to Subhash for organizing this tournament. There are less tournaments in Nepal excluding the DPL and the EPL, so, these kinds of competitions will help Nepali cricket,’’ Bhandari said.

“I am very thankful to Subhash and also the team for selecting me. I am very happy for getting to feature from Rupandehi and I hope for the success of my team in this second edition of the tournament,’’ Gauchan said.

Biratnagar Kings
The sixth team of tournament is Biratnagar Kings and has Paras Luniya as the team owner, who is the Managing Director of Mahalaxmi Cable, while the skipper of the national team Paras Khadka is the strategic player.

“The hype of the tournament and also the cricket in Nepal is increasing day-by-day. I am happy to participate in this grand event and I hope investors will keep on investing for the betterment of Nepali cricket,’’ Khadka said.

The tournament, which starts from March 31 and ends on April 14, has already opened the registration form for players which can be done until February 8.

KATHMANDU, Oct 23: Everest Premier League 2017 Player Auctions was conducted on Monday inside the closed rooms of Annapurna Hotel for the... Read More...

Floods and landslides kill 70 in Province 1
6 hours ago

Govt has pushed country toward anarchy: Oli
39 minutes ago