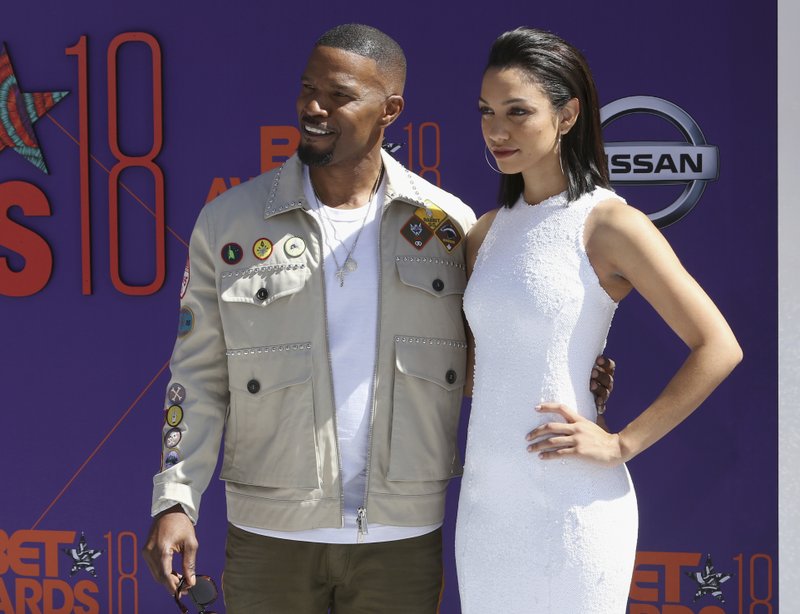 Jamie Foxx, left, and his daughter Corinne Foxx arrive at the BET Awards at the Microsoft Theater on Sunday, June 24, 2018, in Los Angeles. (Photo by Willy Sanjuan/Invision/AP)

June 24: Host Jamie Foxx kicked off the 2018 BET Awards rejoicing in the uber success of “Black Panther,” namedropping the records the film has broken and even pulling Michael B. Jordan onstage.

“We don’t need a president right now because we got our king,” Foxx said of T’Challa on Sunday at the Microsoft Theater in Los Angeles. “(Director) Ryan Coogler gave us our king.”

Foxx entered the arena with a stuffed black panther toy — with a gold chain around its neck — which he handed to Jordan. He later pulled the “Creed” star onstage to recite a memorable line from “Black Panther.”

“Bury me in the ocean with my ancestors who jumped from ships, ’cause they knew death was better than bondage,” Jordan said to cheers from the audience, which included Childish Gambino, LL Cool and DJ Khaled.

Foxx joined rapper Jay Rock onstage for an energetic performance at the top of the show. J. Cole, with singer Daniel Caesar, was in top-notch form when they hit the stage for a performance.

DJ Khaled, who the leading nominee with six, won the first award of the night — best collaboration — for “Wild Thoughts” with Rihanna and Bryson Tiller.

“God is the greatest. I want to thank God on a whole other level. He blessed me with my biggest blessing — Asahd Khaled,” said DJ Khaled, who was holding his son on his hip onstage.

He also used his speech to highlight young people.

Later in the show, legendary singer Anita Baker — who dominated the R&B charts from the early ’80s to mid-90s with smooth songs like “Sweet Love” and “Giving You the Best That I Got” — will receive the Lifetime Achievement Award.

Cardi B, who is pregnant and will not attend the show, is nominated twice for the top prize — video of the year — with the songs “Bodak Yellow” and “Finesse Remix” with Bruno Mars. She has a strong chance of picking up best female hip-hop artist, an award Remy Ma won last year, ending Minaj’s seven-year winning streak in the category.

Drake is also a double nominee for video of the year with “God’s Plan” and “Walk It Talk It” with Migos. Others nominees are Kendrick Lamar’s “Humble” and DJ Khaled’s “Wild Thoughts.”

SZA, who will attend the show, is nominated for four awards, including best new artist and best female R&B/pop artist, pitting her against Beyonce, Rihanna, H.E.R. and Kehlani.

The BET Awards normally hands its Humanitarian Award to one person, but six individuals will receive the honor Sunday. Dubbed “Humanitarian Heroes,” the network will award James Shaw Jr., who wrestled an assault-style rifle away from a gunman in a Tennessee Waffle House in April; Anthony Borges, the 15-year-old student who was shot five times and is credited with saving the lives of at least 20 other students during February massacre in Florida; Mamoudou Gassama, who scaled an apartment building to save a child dangling from a balcony last month in Paris; Naomi Wadler, the 11-year-old who gave a memorable and influential speech at March for Our Lives; Justin Blackman, the only student to walk out of his high school in North Carolina during the nationwide student walkout to protest gun violence in March and journalist and activist Shaun King.

Election campaign of NSPN kicks off in Kailali

KAILALI, May 24: The Naya Shakti Party Nepal (NSPN) has started the campaign for the second phase of the local... Read More...