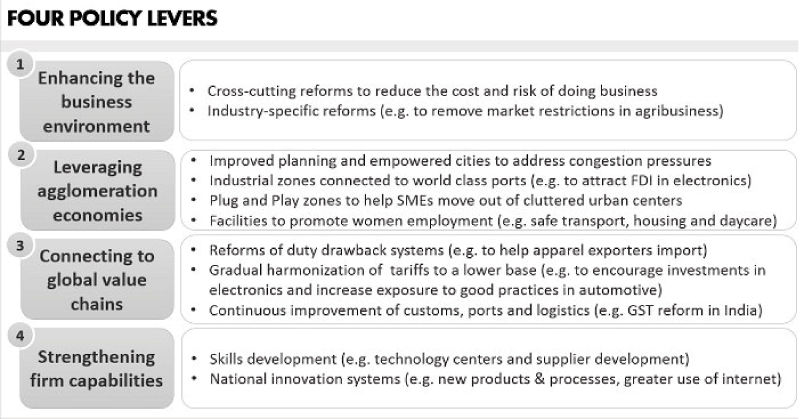 WASHINGTON, Oct 7: South Asia can become the next manufacturing and export powerhouse if it increases the competitiveness, according to a new report by the World Bank.

The new report entitled ‘South Asia’s Turn, Policies to Boost Competitiveness and Create the Next Export Powerhouse’, released on Thursday, also underlines a right mix of reforms and investments to boost competitiveness and productivity.

Speaking at a discussion on ‘How Can South Asia’s Firms Better Compete?’ organized on the sidelines of the 2016 Annual Meetings of International Monetary Fund and World Bank Group in Washington DC on Thursday, trade experts, World Bank Group’s senior officials, researchers and policy makers said that South Asian countries have underperformed in terms of both quantity and quality of exports because most firms in the region have low productivity which is the main driver of sustained competitiveness.

“South Asia seems to be less competitive than its neighbors. Little progress has been made in diversifying exports and converting them into higher value added products in the region,” Anabel Gonzalez, Senior Director -- Trade and Competitiveness at the World Bank Group. “Countries in the region still need to build more competitive business environment, increase productivity and capitalize the benefits of urbanization and clusters,” she added.

The participants of the discussion said the region’s policymakers should re-examine the contents and prioritization of the policy toolkit when it comes to competitiveness and productivity. They further added that the region can compete in the global scale and realize its enormous potential if it can put in place needful ‘policy levers’.

Speaking at the event, Kim Elliot, Senior Fellow, Center for Global Development, said priority should be given to integrating small and land-locked countries in the region as a part of driving competitiveness. “There are three large economies -- Bangladesh, India and Pakistan -- in the region which have a pretty good access in terms of transportation and proximity to market. There are also small land-locked countries like Nepal, Bhutan and Afghanistan,” she said. “It should also be figured out how to better integrate those smaller economies regionally.”

Rubana Huq, managing director of Mohammadi Group, Bangladesh, highlighted the need to raise competitiveness of private firms in terms of price, quality, productivity and compliance to boost their productivity.

The authors, in their report, have outlined four ‘policy levers’ that can help the region become more globally competitive across a broader spectrum of industries, accelerating growth and reducing poverty, especially for women.

The report calls for enhancing business environment, leveraging agglomeration economies, connecting to global value chains, and strengthening firm capabilities as the levers that can boost competitiveness and productivity in the region.

While enhancing business environment has been always featuring in the policy discourse and policy pathways to address them have been mapped out by various institutions, the remaining three levers are new and less prominent in discussions related to trade competitiveness of South Asia, according to the authors.

The authors have analyzed agri-business, electronics, apparel and automotive as case studies to find out the drivers and constraints to productivity.

KATHMANDU, Nov 14:  Nepal Police has recommended 4 Deputy Inspectors General (DIGs) of Nepal Police for the promotion to the... Read More...

LONDON, Nov 16: The BBC said on Wednesday that its World Service will begin broadcasting in 11 additional languages in... Read More...