The assembly was organized to celebrate the 100th birthday of Dr. Sun Myung Moon on Tuesday.

Around 6,000 distinguished guests from home and abroad, including Dr. Hak Ja Han Moon, co-founder of the Universal Peace Federation (UPF), Hun Sen, Prime Minister of Cambodia, Brigi Rafini, prime minister of Niger, and around 150 former and current heads of state from 120 countries participated in the program. 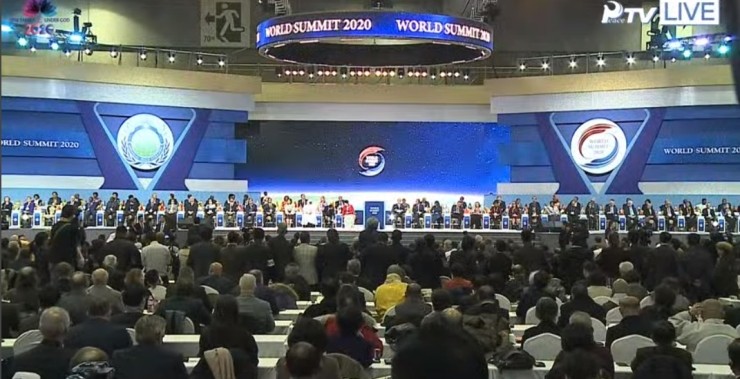 In his speech during the assembly, the former UN Secretary General said "I can feel the passion for world peace at World Summit 2020. I firmly believe that this summit will serve as a great springboard for gathering the board, substantial support of the international community in achieving this vision for the sake of a unified Korea, and for the sake of the international community more largely.”

Ban said in his welcoming speech “Among the world’s thorny issues such as exclusive nationalism, peaceful unification of the Korean Peninsula and environmental issues, the World Summit 2020 is indeed a timely conference.”

Furthermore, he emphasized that “As the natural environment is becoming the silent harbinger of the world’s end, I concluded the Paris Agreement as the first agenda to be done during my tenure at the U.N. We need more worldwide efforts to make this realization. Therefore, this summit will be a significant opportunity to bring substantive support for the peaceful reunification on the Korean Peninsula and world peace centered on co-existence, cooperation, and prosperity.”

Moon also said that he would continue to work for international peace and humanity till his last breath.

WHO calls emergency meeting as monkeypox cases top 100 in Europe

LONDON, May 21: The World Health Organization was holding an emergency meeting on Friday to discuss the recent outbreak of... Read More...

Russia claims to have taken full control of Mariupol

POKROVSK, Ukraine, May 21: Russia claimed to have captured Mariupol on Friday in what would be its biggest victory yet... Read More...

'We are going to die': Sri Lanka warns of food shortages

COLOMBO, May 20: Sri Lanka's prime minister has warned of a food shortage as the island nation battles a devastating... Read More...