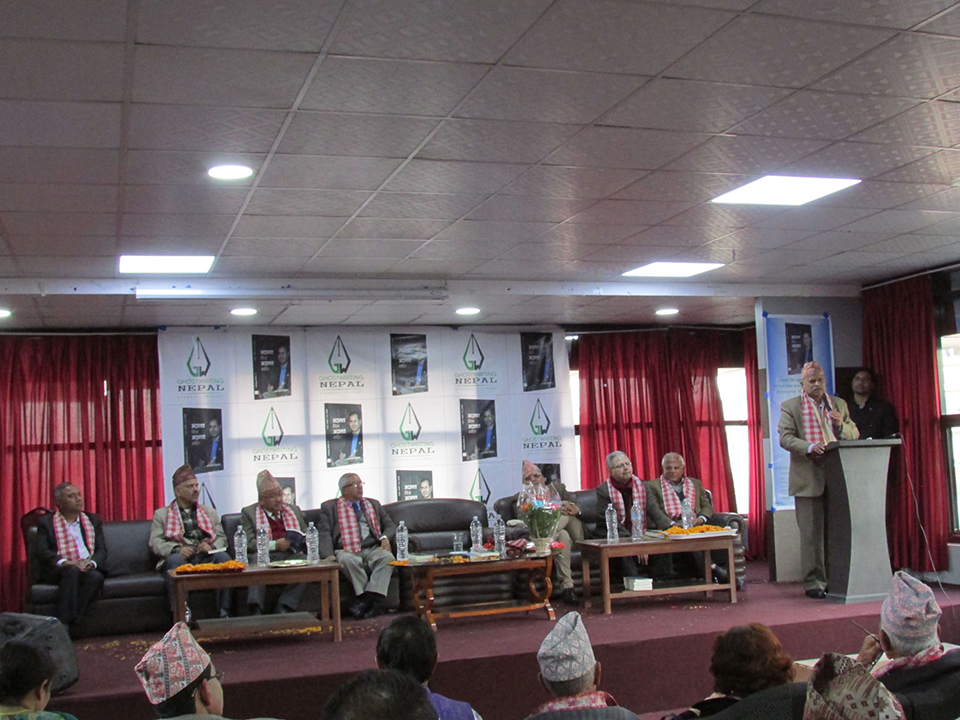 KATHMANDU, Feb 26: Former President Dr Ram Baran Yadav has admitted that it was difficult indeed to forge political consensus in the fluid time, so the Chief Justice had to be picked for the Chairman of the Council of Ministers to conduct election to the second Constituent Assembly so that country would get a new Constitution.

"I had aimed to be NC President and the Prime Minister but accidentally became the first President of the country," Dr Yadav shared at a programme organized to release a book penned by former CJ Registrar at Supreme Court, Dr Ramkrishna Timalsena.

Releasing the book 'Adalatbhitra Adalatbahira' (In and Out of the Court), here today, the former President said the present Constitution is modern and practical that it helps institutionalize federal republic, inclusiveness and secularism.

He, however, asserted that the court protected democracy in the critical moment of Nepal's history. The court was further assisted by the media, civil society and aware public. The former President suggested that adequate discussion is imperative to finalize laws and constitution.

On the occasion, Chairman of the National Human Rights Commission and former Chief Justice Anup Kumar Sharma said it was not a democratic practice at all to make sitting Chief Justice the Head of the government.

The book features Dr Timalsena's three decades of experience in the legal service.

The book has also mentioned about the personality of seven former Chief Justices with whom Dr Timalsena worked together at SC.

Similarly, former CJ Min Bahadur Rayamajhi commented that the book has mentioned the issues in the court which he too was unaware of.

Another former CJ Kalyan Shrestha pointed out the need of initiating debate on literature of law. The good governance, development, rule of law and democracy should function hand in hand.
Reviewer of the book, politburo member of the NCP and former Minister for Education, Dr Ganga Lal Tuladhar observed, "Former security person, former administrator and politicos have a growing wiliness to write autobiography, and those working in the judiciary will also face difficulty to write some issues black and white.

KATHMANDU, March 25: The Supreme Court on Sunday refused to free Kamal Gyawali, the then chief of Kist Bank, who... Read More...

Govt in a rush to inaugurate Dharahara
4 hours ago