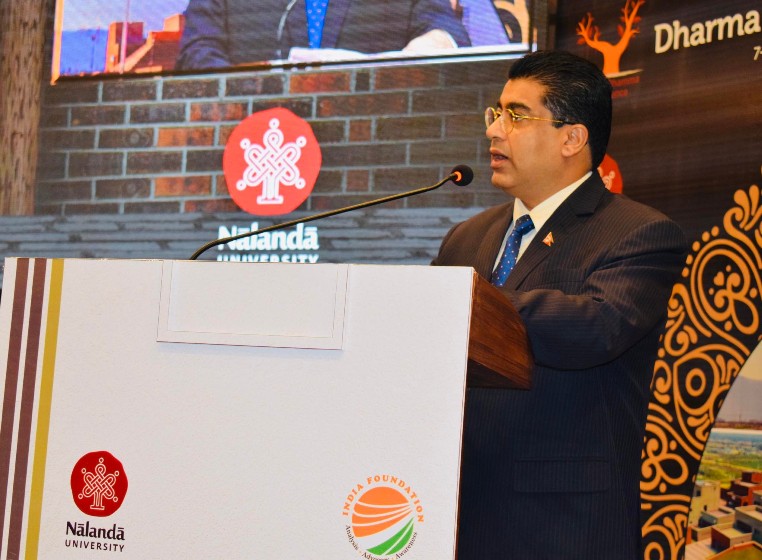 Vice President of India M. Venkaiah Naidu, Governor of Bihar Phagu Chauhan and Chief Minister of Bihar Nitish Kumar and former national Secretary-General of Bharatiya Janata Party Ram Madhav were among other 40 prominent speakers in the international conference. The three-day long conference was participated by more than 200 international delegates, dignitaries, a galaxy of scholars from various background and thousands of Indian participants.

The conference provided a platform for the best minds from the world of academics as well as leading policymakers, religious heads from India and abroad to come together to explore new possibilities in building a post-Covid world order, according to a press statement issued by the organizers.

Addressing the conference as a Special Guest of the Nalanda University and India Foundation, a premiere Think Tank institute based in New Delhi, Dhakal stated that " Dharma-Dhamma, which Nepal and India proudly share as a precious part of their history and cultural legacy, and which has influenced much of Asia's thought and approach to life, offers strength, solace and hope to the world".

While highlighting the importance of integrating the harmonious coexistence between human and nature, Dhakal expressed confidence that the conference will be beneficial to move forward from the troubles of the pandemic for a happier and healthier post-Covid world.  He also emphasized that the topics related to healthcare, human welfare, climate change, and social integration are prominent agendas for the present days.

In his statement, Dhakal also argued that "Sustainable peace, universal health, justice, and equality, caring, sharing, and happiness are the driving forces rather than pursuits of individual or national self-interests. As a newly-appointed special envoy of world Summit, Dhakal also had friendly conversation with Bihar Chief Minister Nitish Kumar and commended his able leadership in uplifting human lives and faster economic growth of Nepal’s neighboring state, Bihar. Chief Minister Nitish Kumar expressed his happiness on meeting a guest from one of India's closest neighbors.

During the conference, Dhakal also hosted a number of side meetings including with the Minister of Transport from the government of Sri Lanka; Sri Sadhu Bhadresh Das, of Bishnu Mohan Foundation, India; Vice Chancellor of Nalanda University Prof. Sunaina Singh among others.

A member of the Nepalese Constituent Assembly, Dhakal is accompanied by Spokesperson of Family Party Santosh Paudel and South Asian Convener of the party Krishna Adhikari.