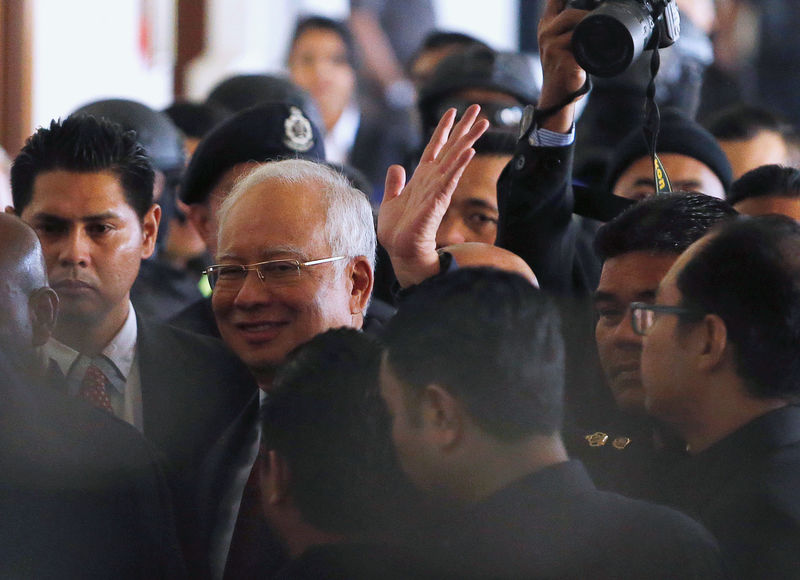 Former Malaysian prime minister Najib Razak waves as he walks to a courtroom, after his arrival in court in Kuala Lumpur, Malaysia July 4, 2018. REUTERS/Lai Seng Sin

KUALA LUMPUR, July 4: In a stunning fall from grace, Malaysia’s former Prime Minister Najib Razak was charged in court on Wednesday as part of an investigation into allegations of extensive corruption and misappropriation at a state fund he founded.

Najib pled not guilty to three charges of criminal breach of trust and one count of abuse of power, in relation to a suspicious transaction involving SRC International, a former unit of 1Malaysia Development Berhad (1MDB).

Each of the four charges carries a prison sentence of up to 20 years. The abuse of power charge carries a fine of not less than five times the “value of gratification”.

“As a public official, which is prime minister and minister of finance, used your position for self gratification (for a) total of 42 million ringgit,” Attorney General Tommy said referring to the abuse of power charge.

The charges relate to funds that allegedly went from SRC International into Najib’s personal bank account, but are only a fraction of the total amount allegedly misappropriated from 1MDB.

The U.S. Department of Justice has said more than $4.5 billion was siphoned from the fund.

Najib has denied wrongdoing since news of the scandal emerged.

SRC is the initial focus of Malaysian investigators as all the suspicious transactions involving the firm were made through Malaysian entities, unlike other 1MDB related transactions that went through foreign banks and companies.

Najib was arrested at his home on Tuesday, less than two months after an unexpected election defeat to a coalition led by his mentor-turned-foe Mahathir Mohamad. Police and anti-graft agency officials have revived investigations into the fund’s missing billions since his ouster.

Some of Najib’s children were present in court, including his stepson, Riza Aziz, who on Tuesday was questioned by anti-graft officers.

Najib, who spent the night in lockup, arrived at 8.20 a.m. (0020 GMT) at the court complex in Malaysia’s capital of Kuala Lumpur, wearing a dark blue suit and a red tie.

Crowds of media and onlookers jostled to catch a glance of the former premier as he was led to a sessions court to face the charges.

Some members of Najib’s UMNO party chanted and held up placards in support of their former leader.

Earlier, state news agency Bernama broadcast the movement of Najib’s convoy live as it moved through rush-hour traffic during the drive from the Malaysian Anti-Corruption Commission’s offices in the administrative capital, Putrajaya, to the court in Kuala Lumpur.

A spokesman for Najib said on Tuesday that the SRC charges and the 1MDB investigations against the former leader were “politically motivated”, and that Najib will contest the charges and clear his name in court.

Mahathir said in an interview with Reuters last month that embezzlement and bribery with government money were among the charges that Malaysia was looking to bring against Najib, 64, adding that Najib was fully responsible for the 1MDB scandal.

Since his loss at the polls, Najib has been barred from leaving the country and had millions of dollars of items seized from properties linked to his family.

In a pre-recorded message posted on Twitter after his arrest, Najib said he was not perfect and “not all the accusations against me and my family are true.

“Let investigations be carried out. I have not had a chance to defend myself,” he said.