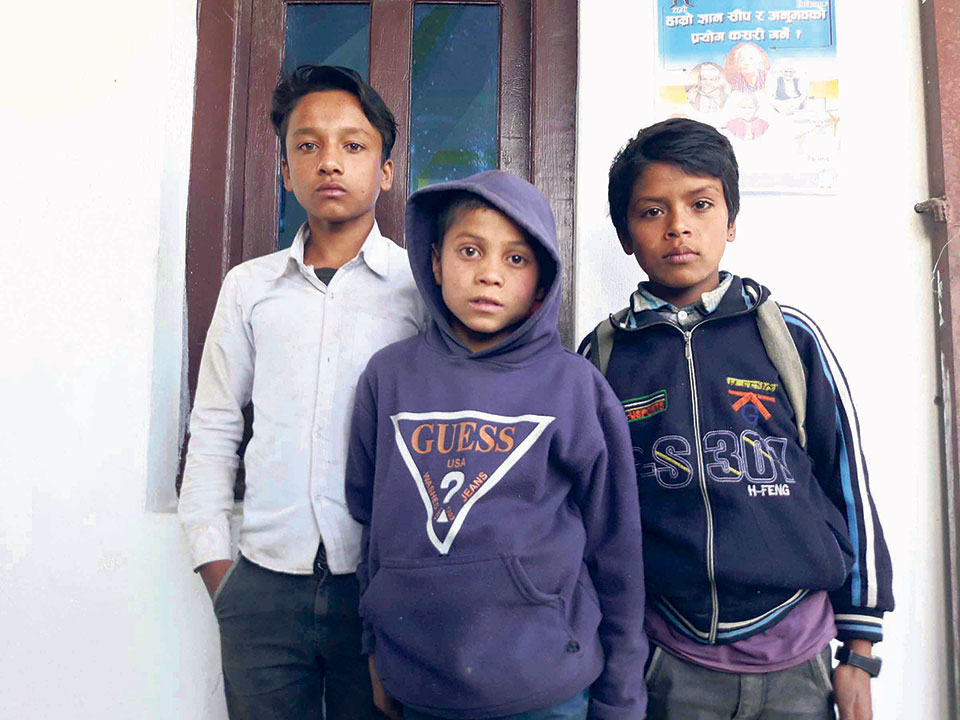 Caretakers of such children, who themselves are helpless, are urging the government to take care of such children along with making moves to avert family disintegration.

KHOTANG, Jan 21: Life was going normal for Ghanshyam Dhakal, 11 until recently. A resident of Majhuagadi Rural Municipality-9, Nirmaldanda, he had been a happy and active child even though his father was away from home. His mother would take good care of him and his two siblings. In the morning, she would wake them up early, get them ready, feed them, dress them and send to school. Father's absence did not bother them much, Dhakal says.

Last month, the mother 'disappeared' from home. Later, the family learnt that she married another man. She did not come back home, even to meet the children.

Even before they could cope with their separation from mother, their father gave another shock. Right after returning from Saudi Arabia, he also married another woman. He left home with the woman, abandoning the children.

Dhakal and his siblings now live with their 64-year-old grandmother. Dhakal is a third grader and the two other kids are in nursery. Abandoned by both parents, their life is in jeopardy now. As none of them earn, their grandmother said that she won't be able to send the kids to school in the days ahead.

The sudden crashing of the parent's relationship has made the children's future uncertain. While it remains unknown if the husband was in relationship with another woman before the wife eloped away or if the man searched for and married another woman after learning about his wife's elopement. Neighbors are clueless about what actually happened in Dhakals family. Nevertheless, they expressed concern that irresponsible behavior of the parents has made the children's future uncertain.

“I am extremely worried about my grandchildren's future. I am very disappointed with my daughter-in-law. And, even more with my son. He had gone to Saudi Arabia to earn money and give a better future to these children. But after returning he left us all in a lurch for another woman,” Devi, the grandmother said.

“I don't have money to buy them food, pay their school fees or buy stationeries. I cannot even afford buying warm clothes for them. I am worried about their future but there is nothing I can do.”

Abhishesh Pariyar of Chiuridanda village is 14-years-old. His father had gone to Saudi Arabia four years ago. So far, he has not sent money back home nor has he been in touch with the family. Recently, Pariyar's mother tied nuptial knot with another man and left the young boy and his younger siblings.

In yet another such case, a wife eloped with another man after learning that her Quatar returnee husband was suffering from mental health problems. The husband eventually died of the disease, which the locals could not identify. Her son, 13-year-old Manish Luitel and his younger sister have been living with their aunt. “We are living with my father's sister. It feels very bad to have such life,” he said.

These cases are tip of the iceberg. Problem of family disintegration owing to foreign employment is rife in the district. Physical and emotional distance between husband and wife has been crucial in their separation and subsequently affecting their children's future. Even though such problem have been taking toll on children's health, education and well being, this issue is yet to get attention from the government.

Caretakers of such children, who themselves are helpless, are urging the government to take care of such children along with making moves to avert family disintegration. Dhakal's grandmother, Devi stated that it would be easier for her to educate the children if the government would provide them with the necessary means. Or else, soon the children will stop going to school, she said. “They do not have father, they do not have mother with them. You cannot count on old people like us. You never know when we will die. And with us gone, what will the children do?” she wonders.

Nabin Chamling, a teacher, said that performance of children coping with family disturbances and insecurities is affected. He stated that separation of married couple is largely happening due to foreign employment. “It is a very serious social issue, and the state must come up with some support for such kids,” he said.

KATHMANDU, July 5: The Ministry of Labor and Employment has set up a help desk to look into cases of... Read More...

POKHARA, July 29: Some 27 complaints on foreign employment frauds have been registered during two months at the branch office... Read More...

Is America returning to multilateralism?
23 hours ago