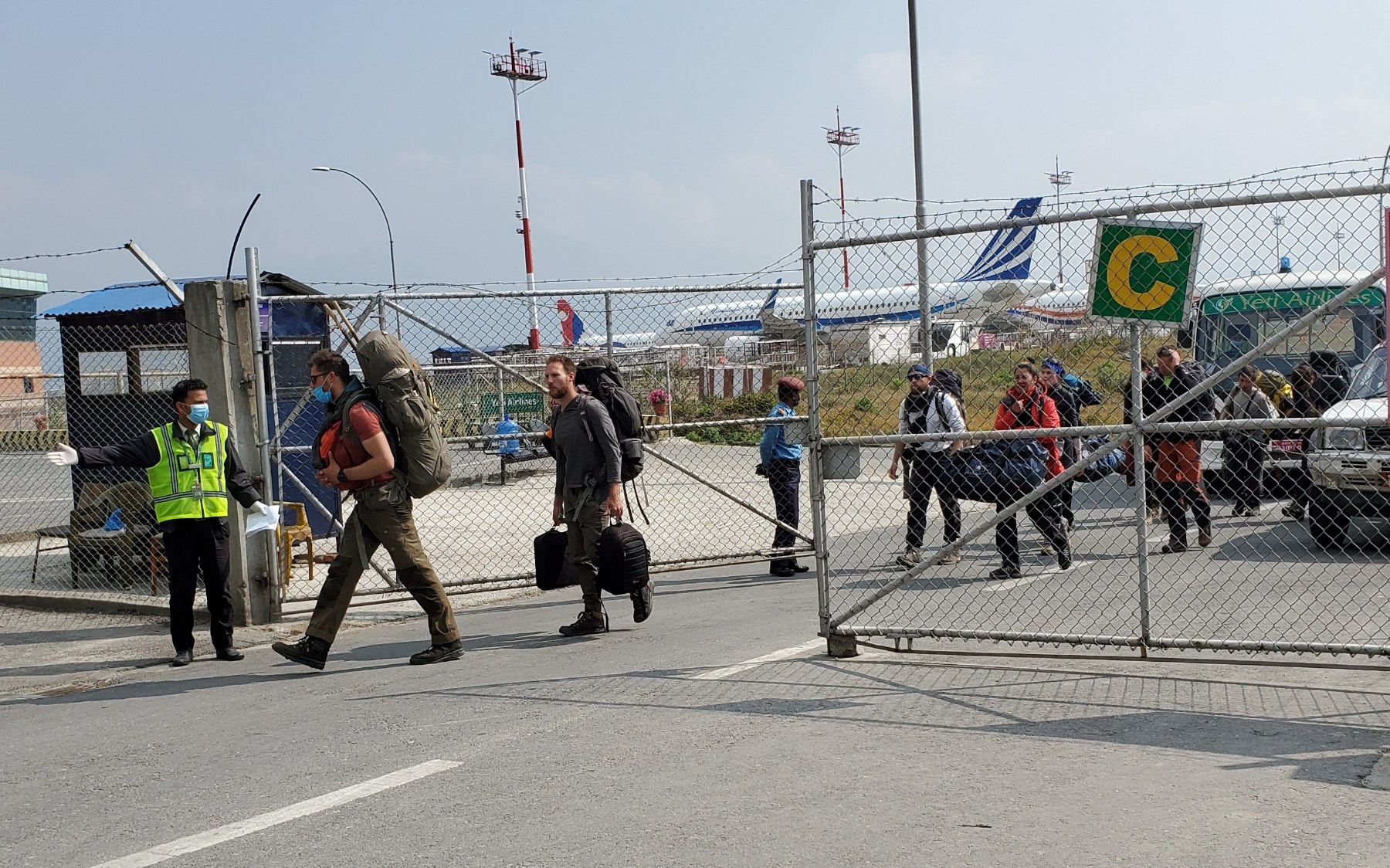 Tourists rescued from Lukla in Solukhumbu district by a Tara Airlines flight exiting the Tribhuvan International Airport in Kathmandu on Thursday. Several European countries rescued their citizens from Pokhara and Lukla on Thursday and plan to repatriate them by chartered flights. Photo: Dipesh Shrestha/Republica

KATHMANDU, March 27: A day after the High-Level Coordination Committee formed to prevent and control the spread of coronavirus decided to facilitate concerned countries to rescue their nationals stranded in Nepal, a few foreign countries have started evacuating their citizens from various trekking trails of Nepal to repatriate them.

Hundreds of trekkers are stranded in popular trekking routes, mainly in the Everest region, Annapurna region and Jomsom of Mustang after Nepal enforced a weeklong lockdown earlier this week and suspended both domestic and international flights and long-haul passenger vehicle services. Ordinary public are also asked to stay inside their homes during the period as part of the nationwide lockdown to stem the spread of the coronavirus pandemic.

But this harsh measure has largely affected the foreigners, mainly the trekkers. They did not get enough time to arrange flights for their departure.

A complete lockdown enforced a few of days after enforcing partial lockdown has left many trekkers stranded in the Himalayas. Although many of them tried to return to Kathmandu to fly home before the imposition of the complete lockdown they were unable to do so because it often takes several days to return to Kathmandu and helicopter rescue is not easily available in remote areas and they are also costly.

Official at the Nepal Tourism Board said France is arranging a special Qatar Airways flight to Paris for repatriating its citizens.

Lila Baniya, an official at the NTB, said Kathmandu-based embassies of Russia, UK, Germany and South Korea have also sought flight permission to evacuate their citizens. The United States of America and other countries are currently collecting details of their nationals stranded in Kathmandu and other districts.

Based on requests from the embassies, private airlines and tourist buses have been ferrying tourists from their stranded areas -- Jomsom, Pokhara, Chitwan, Lumbini and Manaslu, among others, to the capital city Kathmandu.

Trekkers have encountered trouble in the trekking routes after the government ordered everybody to stay inside their homes and order closure of businesses. Since Nepal government has already suspended all domestic and international flights, any country seeking to arrange a chartered flight needs to seek permission from the government for airlifting their citizens.

If the foreign tourists are unable immediately to return home, they will be sent to a mandatory 14-day quarantine in Nepal.

Buddhi Sagar Lamichhane, a joint-secretary at the Ministry of Tourism, Culture and Civil Aviation, said he has been coordinating with the immigration and airport authorities to facilitate the landing of chartered flights in Kathmandu.

“Some countries including France, Germany, South Korea and Russia have been trying to evacuate their citizens from Nepal. We have been working to provide permission for their chartered flights,” said Lamichhane.

Govt prepares for yet another lockdown extension

KATHMANDU, April 14: The government is preparing to extend the ongoing lockdown by at least one week after cases of... Read More...