For disabled in Valley, overcoming odds a daily struggle 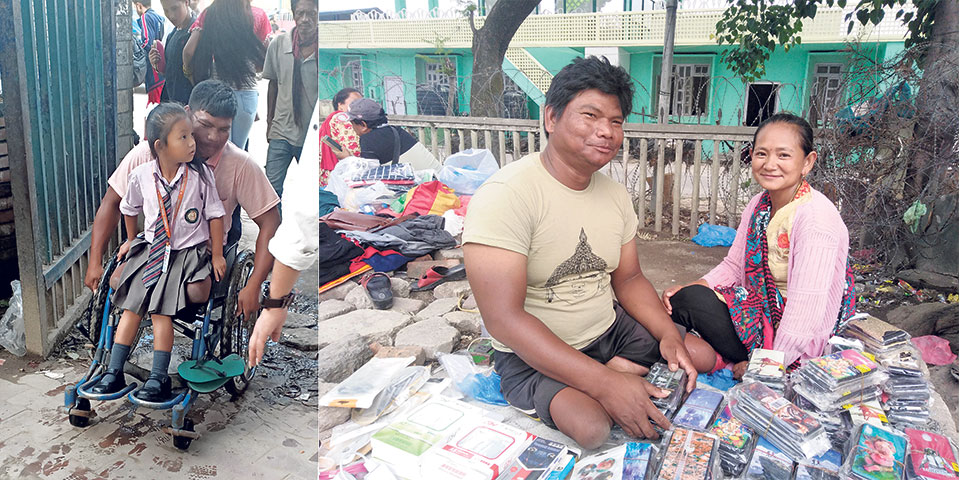 KATHMANDU, Aug 6: What does it take to overcome disability barriers? For Sanjay Chaudhary, all it took was a disabled friendly commute, a few months of training, a few thousand rupees, and a lot of determination.

Today, Chaudhary is a proud street vendor who is leading a normal life with his wife, Rupa Magar, and their daughter, Januka, in Kathmandu.

He sells phone cover and electronic gadgets on the footpath near New Bus Park while Rupa, also a handicapped woman, sells clothes. Together, the couple earns somewhere between Rs 1000 to Rs 3500 every day. It's their only source to meet their ends and send their daughter to school.

“It may not be much but it's enough to meet our daily necessities,” Chaudhary said.

While the policymakers struggle to devise ways to integrate people with disabilities, many disabled people like Chaudhary are leading by example.

According to the National Population Census 2011, almost two percent of Nepal's population is reported to have some form of disability. Experts suggest that the number could have gone up after the 2015 earthquake which killed 9,000 and left thousands more injured.

In the absence of proper safety nets and lack of political will, many such people have to rely on their families or are even forced to resort to the street to eke out a living. But there is a bigger problem of integration in the mainstream where the disabled feel highly excluded due to the limited access to public services and facilities.

Studies show that the disabled have lesser access to employment, although the development sector and some noted names in the service sector like Nanglo Bakery have been prioritizing people with disabilities.

Chaudhary's own independence was unimaginable until a few years ago when he spent decades figuring out the purpose of his life before eventually coming to Kathmandu. Although he wanted to come to Kathmandu much earlier, his extra protective family wouldn't allow him to leave out of concern about his well-being.

“They were worried that something might happen to me. But they couldn't stop me for long,” said Chaudhary.

Once in Kathmandu, Chaudhary spent months looking for a job without much success. He took refuge at Shanti Sewa Griha, Gaushala, where he learned various skills. He eventually decided to do something on his own with a meager capital of Rs 5,000.

But Chaudhary would soon realize his challenges were far from over despite economic independence. The couple was forced to leave a rented room in Dillibazar because the landlord didn't want to keep people with disability.

They are constantly denied ride in public commutes. Worse, he is often mistaken for a beggar and mistreated while dropping off and picking up his daughter who studies at Siddhartha Public School, Dillibazaar.

Chaudhary's struggle for existence echoes the common struggle the people with disabilities face every day.

Despite the constitutional guarantee of a dignified life, the way society treats such people has hardly changed. There is a dearth of disabled-friendly infrastructures.

In recent years, there have been some visible efforts toward improving the lives of people with disabilities. The policymakers have been spending more on developing a disability-friendly education system and building disabled-friendly infrastructures.

The government provides a monthly allowance of up to Rs 2,000 to the disabled depending on the nature of their disability, while others with minor disabilities can benefit from a range of public services. There is also a reservation for differently-abled people in the state organs.

But experts and stakeholders say such tokenism wouldn't be of much help to people with a disability until the government introduces concrete programs.

"The government should move beyond tokenism and come up with more plans and programs aimed at catering to our actual needs,” Sudarshan Subedi, president of Nepal Association of Disabled, told Republica during a recent conversation.

Chaudhary, although he feels that society's attitude toward people with disability is changing, thinks it would take generations, if not years before they are treated as equals.

“So it's important that we remain mentally and emotionally strong to protect ourselves from negative comments. It's important to be proud of how we are and what we are doing,” he said, “Yes, I have no legs, but I am still standing on my own feet.”