For Dashain, inmates too send money to families 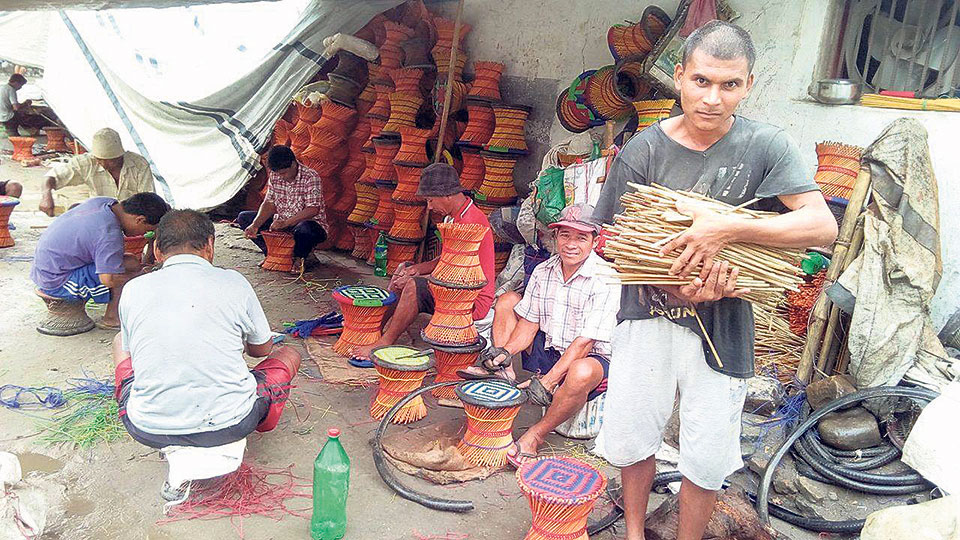 Inmates at district prison of Tanahun making bamboo stools in this recent picture.

TANAHUN, Oct 4: While Hindus across the country are busy celebrating Dashain with their family members and have also started preparing for Tihar, inmates of district prison of Tanahun are having sleepless nights worrying how their loved ones are managing for the occasions in their absence.

Prisoners serving their terms in jail for various crimes miss their families more during festivals, they say. Though they can’t celebrate these great festivals like others, they try their best to support their families financially by involving themselves in various income generating activities within the prison. In order to reduce the financial burden of their family they have been making hand woven bamboo stools. Weaving and making stools is a common job for most of the prisoners through which they earn and send their earnings to their families.

It is true that the prisoners are doing their time in jail for committing inhuman crimes in the past but that does not mean they are heartless. Guilt-ridden prisoners still have the sense of responsibility for their family members. They don’t want their family members to suffer in their absence.

Tul Bahadur Bhujel, one of the inmates says that these days he rarely gets leisure as he is too busy making stools. “We can’t enjoy and celebrate this auspicious festival but we want our family members to enjoy and be happy,” said Bhujel, adding, “I hope this little amount of money can bring smile to their faces even in my absence.” He says this job has not just been a source of income but also a great medium to utilize their leisure.

Bhujel worked for days and nights to earn Rs.18, 000 for his family members in Dashain.  “There was a time when spending days was really challenging for us but now we don’t have to worry about passing time when we wake up in the morning,” said Bhujel. Ramesh Sunar, another inmate states that the money that they earn has not just assisted their families, but has also helped them gain confidence. “My family members don’t need to worry about me as I can earn for myself and also can contribute for them,” he said.

According to him, such activities have also helped them learn and develop new skills which can be very useful even after getting out of the prison. “This time I sent Rs. 25,000 to home. I think that will probably help them celebrate the festival,’ Sunar added.

As per the record of the prison, jailbirds collected Rs.7, 00,000 for Dashain by making bamboo stools. Those with skills and knowledge won’t have to remain jobless even in jail and these inmates have set the perfect example. Even after staying in prison they have tried to deliver joy their family, informed Tirthanath Khanal, acting chief of district prison, Tanahun. “They are not in jail but away from their family to earn for their happiness,” he said.

Most of the inmates agree that jail term has instead changed them for better. They have not just realized their mistakes but have also developed the sense of responsibility towards their family. Now, they are able to better appreciate importance of family members. The stools that they make have high demand in the market. “Unfortunately we have not been able to make as much stools as have been demanded,” said Khanal. All the inmates don’t have the skills required make the stools because of which it has been challenging to meet the market demands.

The stools made by inmates are not just cheaper but comparatively better and stronger. Because of this, demand for their stools is higher in the market. During Dashain alone, prisoners prepare around 1,500 bamboo stools. The price of a stool ranges between Rs. 200 to Rs.700. Acting Chief Khanal informed that prisoners manage to send between Rs. 15,000 to Rs. 30,000 home during Dashain.

Inmates earn around Rs. 4,000 to 6,000 per month which is enough for them as they don’t have to
pay for food and accommodation. Bamboo stools made by prisoners are sold in various markets of Damauli, Bhimad, pokhara, Lamjung among others. They are also exported to foreign countries.

SIRAHA, Jan 14:​ Parmeshwor Paswan of Sitapur, Laxmipur Patari-6, lost his wife to cold after being unable to buy her warm... Read More...

TOKYO, Oct 20: The dead body of a Nepali who died in Japan has been lying at hospital’s morgue following... Read More...