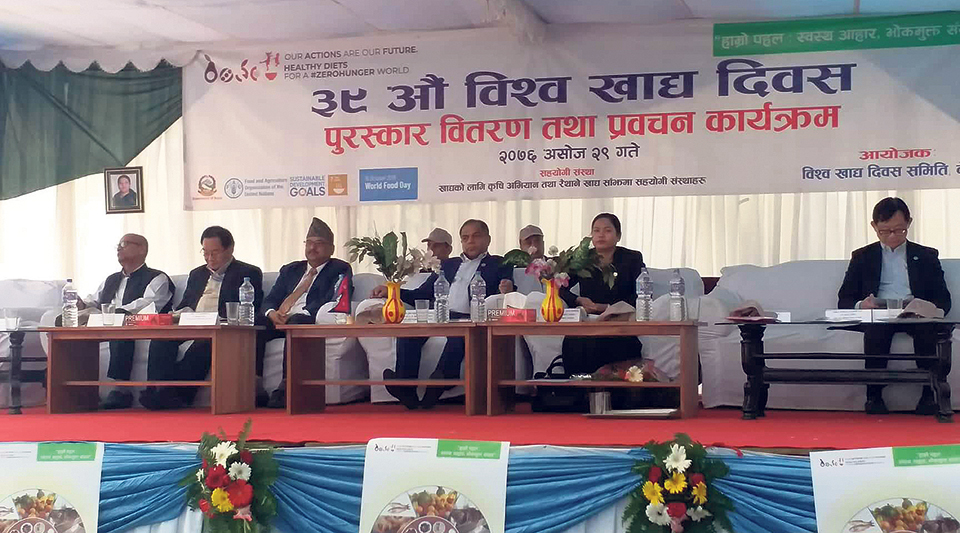 KATHMANDU, Oct 17: Minister for Agriculture and Livestock Development Chakrapani Khanal has said that for Nepal, like other South Asian countries, food management has been the real challenge, not famine.

Speaking in Kathmandu on Wednesday on the occasion of World Food Day, he said that the production cost of food has increased as fewer people are attracted to agriculture these days, leading to decreasing production.

“The profession of agriculture is not profitable, because of which youths from the rural areas are going out of the country for foreign employment, leaving arable lands barren,” he said. “Lack of manpower results in expensive labor, which makes it hard to increase production and maintain food security.”

“Though there have been improvements in the agricultural sector, the sharp growth in population, poverty, and problems in food distribution system along with the changes in our eating habits, significant improvements have not been possible,” Khanal said.

The government has been providing 75% subsidy to the farmers on agriculture insurance premium for risk management. Khanal stated that efforts were being made to bring improvements in various policies and procedures related to agriculture.

According to Global Report on Food Crises 2018, at least 3.4 million Nepalis are in need of food assistance and about 6.4 million people are in the risk of long-term food insecurity.

Nonetheless, statistics show that the status of food security has been degrading from 2015 even though the world has made good achievements in the last two decades.

The population of the world is expected to reach 10 billion by 2050 and to meet the demand of the population at that time, the production of food needs to be doubled.

World Food Day is celebrated in 150 countries on October 16 every year on the occasion of the establishment of Food and Agriculture Organization of the United Nations. Nepal started celebrating World Food Day since 1981. It is the 39th edition of the celebration. The day is celebrated to create awareness about food security and the importance of nutrition, and to call for worldwide initiation to help those who are food unsecured.

The world celebrated world food day with the slogan ‘Our Actions Are Our Future: Healthy Diets For Zero Hunger World’. Nepal has contextualized the slogan as ‘Our Initiative: Healthy Diets, Hunger Free World’.

KATHMANDU, June 10: Although the government has been reiterating its promise on adequate supply of chemical fertilizers during the rice... Read More...

Electronic system to keep tabs on fertilizer stocks at depots

KATHMANDU, March 19: The Ministry of Agriculture and Livestock Development is preparing to launch an electronic system to track distribution... Read More...

Fertilizer short-supply in Sudurpashchim as govt limits quota to 50%

KAILALI, Oct 19: Farmers of Sudurpashchim Province get 50% less chemical fertilizers against their demand, as the federal government has... Read More...