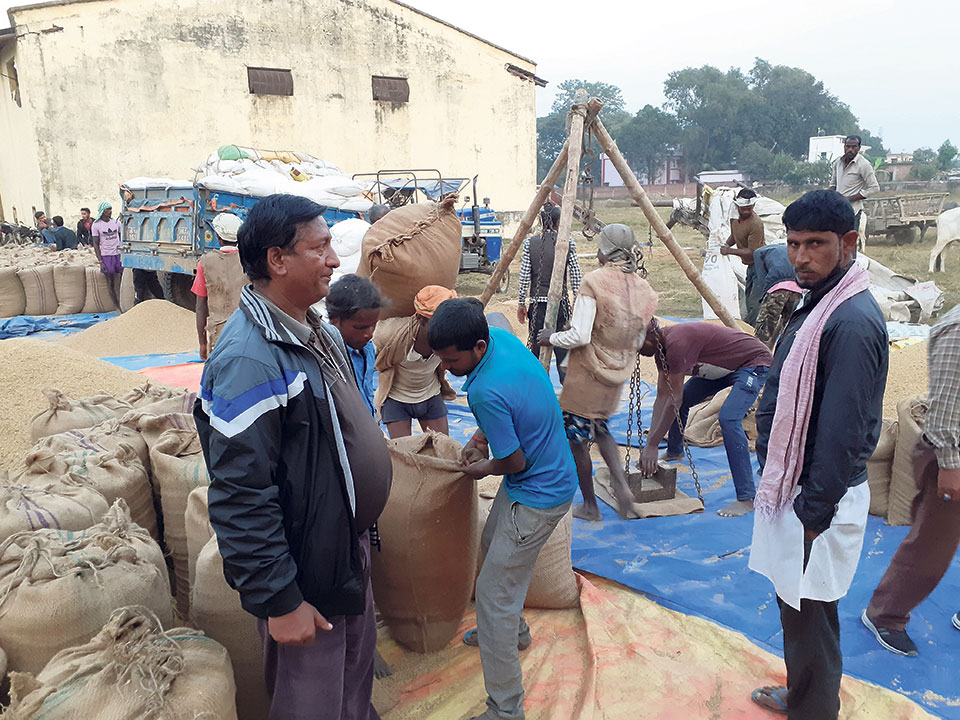 NEPALGUNJ, Nov 24: The Food Management and Trade Company (FMTC) is preparing to purchase a total of 35,000 quitals of paddy directly from the farmers in Nepalgunj.

The company has started purchasing paddy from the farmers from November 13 at its office in Karkado, Nepalgunj. Earlier, a meeting of the purchasing committee led by the Chief District Officer (CDO) had set the price of paddy.

According to Bharat Khaniya, the zonal head of FMTC, the company is purchasing thick paddy (Mota dhan) at Rs 2,532 per quintal, while the farmers get Rs 2,673 per quintal for medium grain paddy (madhyam dhan). The company claims that the farmers are getting 10 percent more for their crop in comparison to the last fiscal year.

In the last fiscal year, the esrtwhile Nepal Food Corporation (NFC) had fixed the price of mota dhan at Rs 2,331 per quintal for that of medium grain paddy  at Rs 2,460 per quintal.

“The farmers can sell their paddy directly at the Paddy Procurement Depot in Nepalgunj,” said Khaniya, adding that the farmers are excited to sell their paddy as the price is better this year in comparison to the last fiscal year.

According to the company, it has four weighing machines at the depot. “The weighing machines are operated from 9am in the morning to 10pm in the evening. The company is purchasing a total of 1,000 quintals paddy on an average everyday,” he said, adding that the number of farmers coming to sell their crop is increasing everyday, and it has been difficult for the company to manage the increasing number of sellers.

The company has already purchased 6,024 quintals of paddy till Friday. The company is planning to purchase paddy until it meets the procurement target.

The head office of the company, on November 12, directed its zonal office to purchase paddy from the farmers.

Meanwhile, the company has to store paddy on an open field due to the lack of a depot.  The company's Nepalgunj office has three depots, which can store up to 20,000 quintals of paddy each. At the two depots, 9,000 quintal of paddy has been stored at present.

Govt to run fair price shops at 43 locations from tomorrow

FMTC selling goats for Dashain at Rs 550 per kg