FM Gyawali delivering his statement during the 43rd Session of Human Rights Council in Geneva on Tuesday. Photo courtesy: Ministry of Foreign Affairs

KATHMANDU, Feb 26: Minister for Foreign Affairs Pradeep Kumar Gyawali has said that the Nepal government is firmly committed to address remaining issues of transitional justice in accordance the Comprehensive Peace Accord (CPA), directive of the Supreme Court relevant international commitments, concerns of the victims, and the ground realities.

Speaking at the High-Level Segment of the 43rd Session of Human Rights Council in Geneva on Tuesday, the foreign minister also shared the progress made so far on the issues of the long-delayed transitional justice process.

"Nepal presents a uniquely successful case of nationally led and owned conflict transformation and peace process.  We are dealing with the incidences of conflict era human rights violations through two independent Commissions – the Truth and Reconciliation Commission and the Commission for Investigation on Enforced Disappeared Persons. The term of the Commissions has been extended to ensure the completion of their work. The newly appointed Commissioners have started functioning in full swing," Gyawali said.

The foreign minister appreciated the continuous goodwill and understanding of the international community in the country's peace process.

On the occasion, Gyawali also sought UN member states' support in Nepal's bid for the membership of the UN Human Rights Council for the second term 2021 to 2023.

Minister Gyawali said that Nepal has strong faith in the values of multilateralism to strengthen and sustain our common aspiration of a peaceful, prosperous and just world. 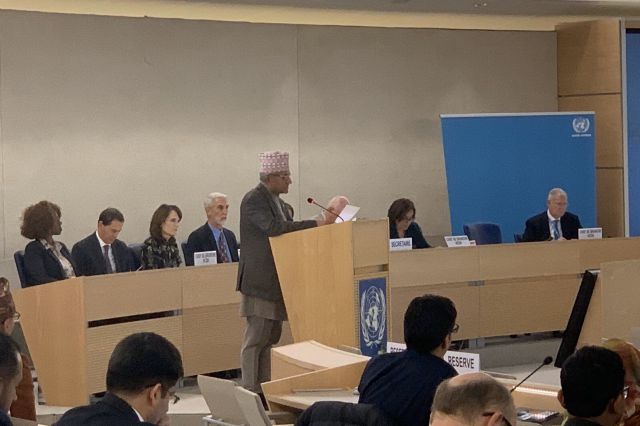 "We remain committed to working together in a balanced and objective manner for the universal protection and promotion of human rights," the minister said.

Nepal firmly believes in the universality, in-divisibility, inter-relatedness, inter-dependence and mutually reinforcing nature of human rights, including the right to development, he said.

The foreign minister said that Nepal believes the rule of law and human rights must be evenly operational at national, regional and international levels.

"We are a party to all major international human rights instruments including seven of the nine core such instruments. We have internalized those values and standards into our national laws, policies and practices," he said.

Foreign Minister Gyawali also shared that Nepal's Constitution is founded on universally recognized human rights and such other principles as inclusive multiparty democratic polity, pluralism, the rule of law, and representative and accountable government. "Independence of judiciary and full freedom of press are the salient tenets of Nepal’s Constitution," he said adding that social justice is integral to the country's democratic process.

"The Constitution guarantees special measures for weaker sections of our society to enable them enjoy fundamental rights and receive a fair share of representation in all spheres of national life. Nepal, as a secular State, guarantees freedom of religion as a fundamental right. The religious tolerance in Nepali society is exemplary," he said.

Gyawali said that Nepal recognizes the role of the grassroots community organizations, civil society, human rights defenders, and the media as the indispensable partners in the promotion and protection of human rights.

Transitional justice bodies may get new lease of life

KATHMANDU, Jan 23: The Transitional Justice (TJ) bodies are likely to get yet another round of term extensions as these... Read More...