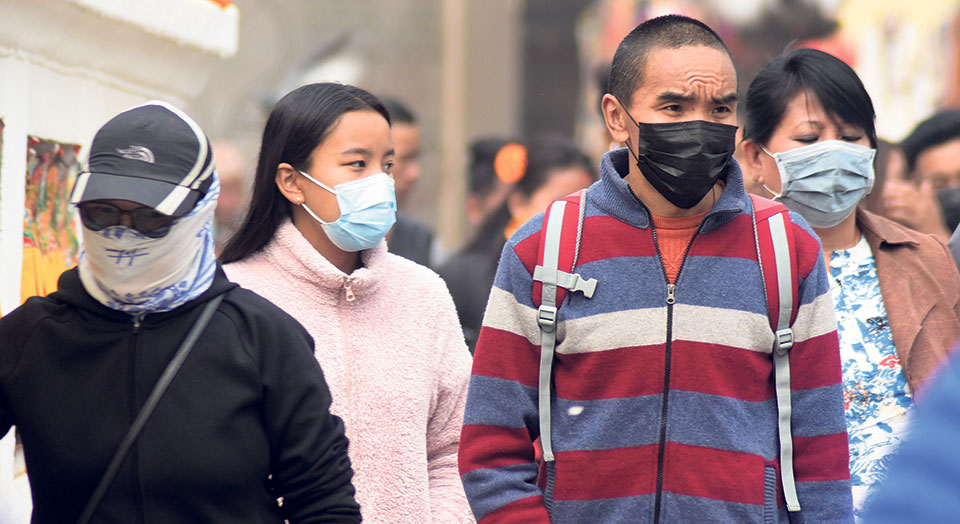 Suyash Dahal, 17, has taken to wearing surgical masks everywhere he goes ever since he first heard news about the potential coronavirus pandemic. Dahal, who is a +2 student, mentions that although he never wore masks until a couple of weeks ago because he finds them uncomfortable, he feels masks have become a necessity right now. The masks, he believes, will, to a certain extent, guard him against infections when he is out. And he thus feels a little safer.

“I wear glasses because I’m short-sighted and wearing a mask with it is very inconvenient as it fogs up the lenses. But because of the coronavirus, I wear masks regardless of how inconvenient they are,” says Dahal.

Like Dahal, many people have started wearing masks and taking other preventive measures to safeguard themselves from the coronavirus that allegedly originated from a meat market in Wuhan, China. The virus, referred to as novel coronavirus or 2019-nCoV, surfaced a little more than two months ago and The New York Times reported that it is believed to have transferred to humans from animals. Athough bats are a prime suspect (as they can host different virus without the virus being a threat to them), nothing has been confirmed regarding this till date.

“I have been following the updates about the Wuhan virus ever since the initial news about it came out and after reading that its mortality rate is relatively low compared to that of the other pandemics that came before it—like SARS (Severe Acute Respiratory Syndrome) and MERS (Middle East Respiratory Syndrome), I’m not so scared anymore,” says 32-year-old Juna Gautam, civil engineer, adding that she thinks because false facts about the Wuhan virus has been spreading over the internet, everyone seems to be terrified of it.

She further says that because many people don’t bother verifying the source of the information they get, they believe whatever they are fed on social media and have extreme reactions to it.

Model and second-year law student, Raunak Mallick, however, confesses that he is extremely worried. Mallick says that because this is a new strain of virus, he is afraid a lot of people will get infected and die before we can come up with vaccines and other treatment for it. He further adds that he is using every preventive measure that is said to work—including wearing surgical masks, washing his hands every hour or so and staying away from animals in general—and is making sure his family members do the same.

“Even though it is a good thing that a lot of people seem to be taking the coronavirus outbreak seriously and are taking precautionary measures to be safe from it, as of now, I don’t think it’s any more severe than regular flu,” says Dr Sher Bahadur Pun, coordinator of clinical research unit at Sukraraj Tropical and Infectious Disease Hospital in Teku, Kathmandu. Dr Pun explains that more people die every year due to other diseases like influenza and that, even then, most people don’t consider flu a serious illness at all.

The fact that everyone The Week spoke to admitted they have never actively done anything to safeguard themselves against regular flu further proves Dr Pun’s statement. Additionally, some people were actually appalled to find out that a regular flu could be fatal as well.

21-year-old engineering student, Erica Rai, says that generally whenever someone from her family gets sick (with what they consider to be just fever or common cold), they tend to take a day or two off (from school or office) to rest and recover from the flu. “Sometimes, we don’t even consult a doctor and just take a paracetamol or a painkiller,” she says.

However, a few weeks ago when her younger brother caught a cold, her father immediately took him to the hospital because “what if he had caught the coronavirus”.

Dr Pun states that cases like that are pretty common since people usually tend to overlook common diseases (that happens to a lot of people very often) and start panicking when a similar but new (and slightly modified version of the) disease is said to be spreading. He mentions that he and his colleagues have been attending to a lot more patients in the past few weeks. He adds he does understand the panic because the symptoms and transmission methods of 2019-nCoV are similar to that of regular flu and there isn’t a way people can tell whether it’s the novel coronavirus and they have to visit a doctor for that.

However, the Wuhan virus is not the first coronavirus to affect Nepal according to Dr Pun as four other coronaviruses have already been seen and were being treated in our country prior to that. He says that most people will probably be safe from most kinds of flu (including the novel coronavirus) if they follow the basic preventive measures against regular flu.

“The only additional thing you have to do (on the basis of the information that has been released till date) to be safe from novel coronavirus is to stay away from animals and make sure that you cook meat really well before you eat it,” says Dr Pun before adding that there has to be more awareness regarding how to keep yourself safe from flu at all times so that new strains of virus don’t cause extreme panic time and again.

KATHMANDU, Feb 7: The government has decided to send 100,000 protective masks to China to battle the coronavirus infection. In... Read More...