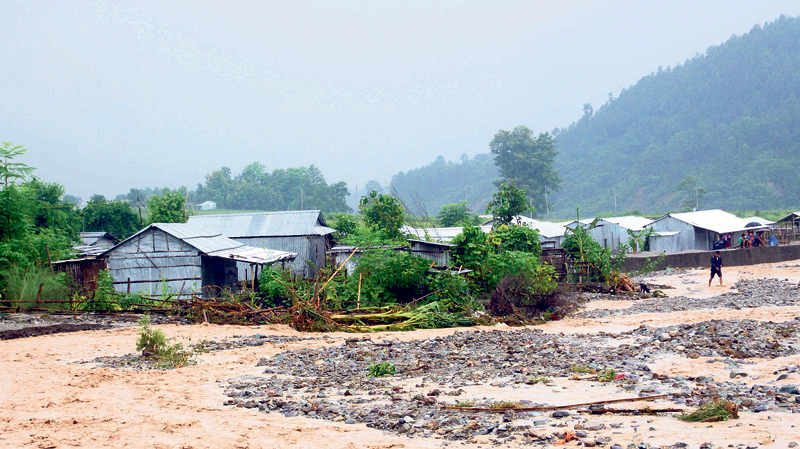 Floodwaters rage along the bank of Surdu River near Sundar Basti in Dharan. Some houses in the settlement were washed away by the floods on Sunday. (Photos: Rohit Rai /Republica)

DHARAN, July 26: Six houses in Sundar Basti of Dharan have been washed away by flood while around 150 others are under high risk of being swept away. Water levels in Surdu and Pukuwa rivers, which flooded the six houses in the last two days, have risen significantly due to incessant rain since last three days.

“Six houses are no more seen now. They disappeared in the water. Six more houses have been badly affected and dozens of others are in risk of getting washed away,” said Jitraj Rai of Sundar  Basti. “We are extremely worried.”

Those displaced due to the flood have taken shelters in neighbors' houses. As it had flooded during the daytime, there were no human causalities. “We had erected spur on our own. But the flood was very powerful, even the spur was washed away. Now, many people are homeless,” Rai said.

Indra Rai, Tejmaya Rai, Laganshwori Rai and Bhaktabhadur Darji , among others, have lost their house to the flood. Houses of Kumar BK, Balbahadur Rai, Bishnuka Rai, Chandra Rai and Sangeeta Rai have been partly damaged. Dozens of houses including that of Maiya Magar, Bishnuraj Rai, Thamraj Rai, Krishna Kumar Sunuwar and Premak BK are threatened by the floods.

“Flood has nearly reached our doorsteps. Anything can happen anytime,” said Indra Laxmi Rai. “We have packed up all our stuffs. We might need to evacuate the house anytime,” she added. Kumar BK added that flood due to Surdu river has troubled them number of times. However, this year, the river looks far more swollen and danger has escalated. “Considering the volume of water in the river it, this time around it's really scary,” BK said, who has already shifted to a rented room in safer place since Sunday.

There are around 300 households in Sundar basti that was established 9 years ago. The settlement which lies near Surdu river falls in Dharan municipality. Locals had erected around 150 meters long RCC check spur in two places for the safety of the settlement four months ago. After one of the spurs was damaged, flood had entered the settlement. “The upper spur was washed away by flood that entered the settlement. If the lower dam also falls down, entire settlement of ward number 17 will be washed way,” said Jeetraj Rai. Rai added that the locals had used all the wires, stones they had to erect strong embankment to prevent their settlement from flood. However, the gabion did not work well. “We used our own skills and resources for the safety our place. But we could not really stop the flood,” he added. He appealed to the local authorities for assisting the community in mitigating the risk of flood and for the safety of the people.

“Now six families have been displaced and their lives are miserable. What would happen if entire settlement is washed away by flood? So, it is better to prepare beforehand than regret later. We look forward to the government for assisting in averting such a calamity for the settlement,” he said.

Locals admit, they too responsible for inviting flood
Remarkably, locals have admitted that they were also partially responsible in creating the vulnerability. Some are less and some are more vocal about it, however, the locals are ready to accept that haphazard mining of stones and sands from the river has been partially responsible for the uncontrolled floods. “In Surdu River, locals are seen collecting sand, stones from the river. They sell it to the traders illegally,” said Jeetraj Rai. “When such essentials are taken out of river, no wonder, chances of flood is much higher,” he added.

[Floodwaters destroyed one of the two spur constructed by the Sundar Basti locals on Sunday.]

Rai further said that collecting and selling of sand and stones from the river is in fact a long run business of the people. “Many are earning livelihood from it,” he said.
Over the years, many of the Sundar basti residents switched to mining sands and stones as an occupation. Though such activities are banned by the government, its implementation has been hit due to lack of effective monitoring by the concerned authorities.

“The government lags behind in implementing rules and regulations that it announces. Since there has been no monitoring, locals have been mining sands and stones without any hassle. When stones, sand are taken out of river constantly, settlements near it naturally get vulnerable,” Rai lamented.

TIKAPUR, May 10:  By collecting money through the social media, 13 youths have built a concrete building for a learning center... Read More...

KASKI, Oct 24: Authorized businesses in Pokhara have complained that vendors who informally sell goods at the footpaths or small shops... Read More...