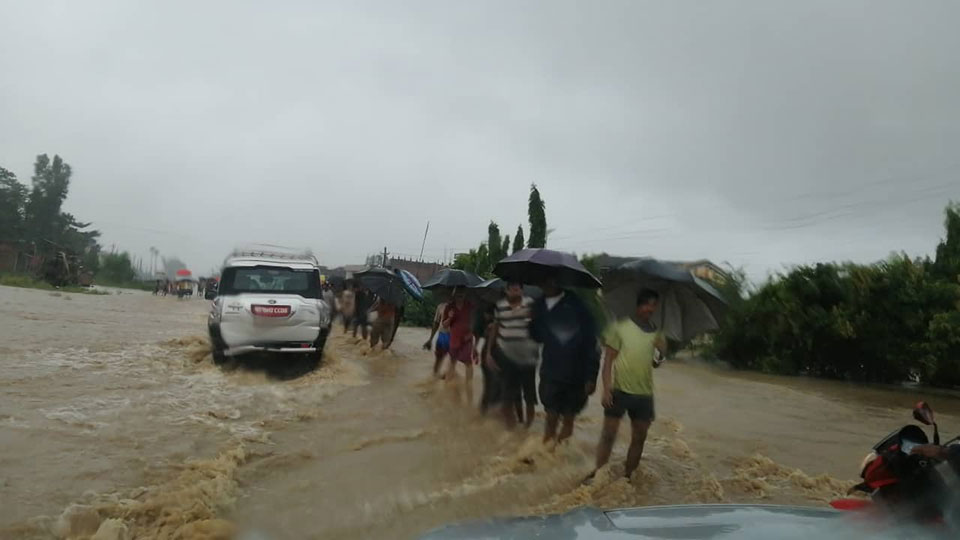 'Only the poor have been hit'

KATHMANDU, July 17: Fifteen-days-old Anandi cries now and again while her mother Laxmania Sadaya tries to breast-feed her. But the infant sucks in vain. Laxmania has not eaten properly since the last few days,because of the devastating floods that washed away her home and belongings. The family is sheltering under a tarpaulin at a roadside at Sundarpur of Siraha Karjanha Municipality – 3, Siraha district. They wonder whether they will have a house to live in again and life will ever return to normal.

After floods wreaked havoc in the country last week, thousands of families like that of Sadaya have been barely managing under make shift shelter while others remain under the open sky at the mercy of the elements.

According to Sadaya, she was quick enough to grab some tarpaulins distributed by 'some people' but her neighbors were not so lucky.

"We somehow got this tarpaulin over our heads. Some others do not even have that. But we have not been given any food," she lamented. "We have no clothes, beds or blankets. It's so difficult," added the mother of three.

Kakul Sadaya, another flood victim in the district, remarked that floods have hit only the poor. "Our houses were easily washed away and we are now left on the roadside," she said. "We have been homeless for five days now but the government is nowhere in sight."

The flood victims were given some beaten rice on Saturday, Sunday and Monday. "On Tuesday, nobody visited us. We are left starving," she said.

Sitadevi, who is eight months pregnant, said she would eat anything, but nothing is available. "With a baby in my womb, I feel a gnawing hunger."

They were sleeping when the flooded Kamala River struck on Thursday night. As per reports, over 5,000 people have been hard hit by flooding in the district. In Rautahat, around 70,000 families are reported to have been affected. Floods have also ravaged Mahottari, Sarlahi, Bara and other districts.

Nepal Police, Nepal Army and Armed Police Force personnel were immediately deployed for rescue and relief, but power cuts, communications snags and blocked roads have hindered operations. According to a police report, 67 people have lost their lives in the flood disaster across the country. While a detailed assessment of the economic loss is yet to be made, victims are left in the lurch in lack of prompt relief and shelter.

According to Mahawati Kumhain, 65, of Rautahat who has been rendered homeless for a second time by floods , the destruction was more severe this time. "I had lost my house to flooding two years back also," said Kumhain. "But this time, the entire settlement was submerged. It's a bigger flood."

She is now living under a tarpaulin near the Bagmati River along with her husband Kishore Pandit, four sons and their wives and 16 grandchildren. "It is a matter of food and shelter. It's a matter of sheer survival," she added.

RAUTAHAT, July 15: Normal life in Rautahat and surrounding areas has come to a standstill following incessant rainfall since the last... Read More...

Dozens of people have died and millions more have been forced from their homes after heavy monsoon floods caused devastation... Read More...

SINDHULI, July 14: A child died and three others went missing as flood triggered by torrential rainfall swept away a six-member... Read More...